We are so much more than ourselves

OK, this post is to wind up the thoughts directly inspired by reading Owen Barfield’s Saving the Appearances. Overall it is, indeed, an important book, and perhaps not as difficult as I’d been led to believe, though that may partly be because some of his core ideas are shared across a great range of other thinkers with whom we’ve become familiar on The Hump this year.

Much of his argument is very solid and, in many points, only really controvertible by ignoring a wealth of evidence. At the same time, though, some more doubtful ideas creep in – perhaps through his championing of Rudolph Steiner and his anthroposophy, so that I agree with one commentator’s judgement that he is a bit like Origen, the Patristic writer, whose ideas are stimulating and often useful, but marred enough to need careful discernment. I feel the same, incidentally, about Jurgen Moltmann, a theologian often taken too much at face value in the science-faith discussion.

In this post I just want to point briefly to areas beyond the philosophy of science, and not directly concerned with metaphysics, to show the application of his thesis in other areas. In particular, I’m thinking of his theme of participation, as opposed to the unsustainable modern dichotomy between “mind” and “objective reality”.

Just in case the idea wasn’t conveyed clearly enough  in previous posts, he distinguishes “original participation”, whereby primitive peoples make very weak distinctions between themselves and the phenomena they experience, and “final participation” as the desirable stage, beyond the over-sharp distinctions our society has made between objective-subjective, self-other, reality-illusion and similar polarities. In final participation we are able to comprehend both the representational nature of all reality in us, and yet its separation from ourselves. This means reaching beyond “the particles” to the mind of God whose creatures they are.

One example of how widely this would affect our thinking is the nature of art. Commenting on the change from classical art as the deliberate representation of nature to the modern concept of originality and “self-expression”, he writes:

We have learned that art can represent nothing but man himself, and we have interpreted that as meaning that art exists for the purpose of enabling Mr Smith to “express his personality”. And all because we have not learnt – though our very physics shouts it at us – that nature herself is the representation of Man.

Hence the riot of private and personal symbolisms into which art and poetry have degenerated. If I know that nature herself is the system of my representations, I cannot do otherwise than adopt a humbler and more responsible attitude to the representations of art and the metaphors of poetry…

But I know also that what so stands is not my poor temporal personality, but the Divine Name in the unfathomable depths behind it. And if I strive to produce a work of art, I cannot then do otherwise than strive humbly to create more nearly as that creates, and not as my idiosyncrasy wills.

There’s much for reflection there. It does not mean a return to art-as-photography, but a conscious creative response to the knowledge that reality is the collective creation of human society. One example given by Barfield is impressionism, which sought to look deeply into the scientific understanding of light and colour (still a human construction, remember) and bring into clearer view what is already inherent in creation. He cites the artist James Whistler who, replying to a lady who said she did not see what his paintings portrayed in her world, said, “Ah, Madam, but don’t you wish you did?” 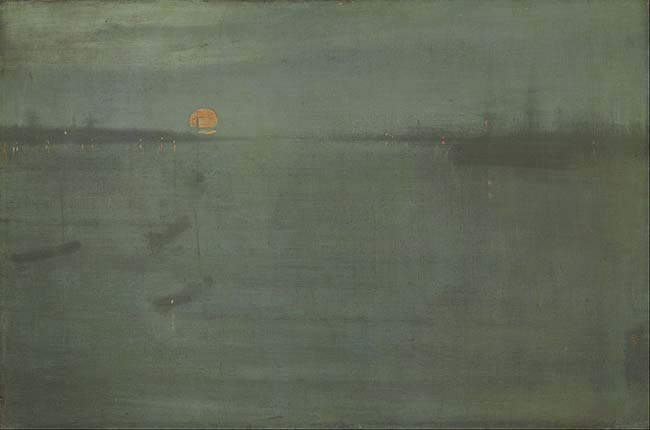 Another area is the field of theology, especially amongst those moderns who stumble over problems that have, in fact, been created only by our modern non-participatory consciousness:

For instance, a non-participatory consciousness cannot avoid distinguishing abruptly between the concept of “man”, or “mankind”, or “men in general” on the one hand and that of a man – an individual human spirit – on the other. This difficulty did not arise to anything like the same extent as long as original participation survived. Therefore our predecessors were able, quite inwardly, to accept the sin of Adam as being their original sin also. And therefore we are not – because, for us, Adam (if he existed) was after all – somebody else! This has brought with it the loss of the whole concept of the “fallen” as an essential element in the make-up of human beings; which in turn is responsible for the devastating shallowness of so much contemporary ethics and contemporary psychology.

So on BioLogos at present there is much posting on whether Adam is merely a symbol of our own individual experience, though Barfield points out elsewhere that symbolism is a late development historically, and tends to be the antithesis of participation. A symbol is that because it is not really what it portrays.But what we participate is real in its own right.

On the question of Adam, John Walton describes Adam’s role in Genesis as that of an archetype, which tends to be understood by many readers as equivalent to a symbol. But that misunderstands the whole psychology and worldview of the biblical writers, in which the historical fall of Adam is something real in which we participate, not something fictional that we bring to reality.

If you doubt this difference in worldview, or its importance, consider some other Christian themes. As Paul points out in Romans 5, we participate in Christ (collectively, mind, as his body) in a comparable way to the race’s participation in Adam. If Adam is a parable, then so (in that literary context) should Jesus be – which of course is the exact line taken by the demythologisers who embody non-partipatory thought.

Consider also the sacraments of the Church. Water baptism is a particpation in the death and resurrection of Christ, and yet at least in my own Baptist denomination it has become a helpful symbol often seen as optional, and in the Salvation Army (as I used to taunt my medical partner, a Salvation Army bandmaster), it has been abolished. The same is true of the Eucharist, which I’ve heard too many “thanksgiving prayers” dismiss as “only symbols” or “tokens” to avoid the taint of transubstantiation (itself a mediaeval attempt to rationalise biblical teaching according to the reasoning of Aristotelian thought – already, as Barfield argues, participation was on the wane). Whereas the Bible describes the supper as a “participation in Christ” in as many words (1 Cor 10.16).

Neither is the failure to take participation on board limited to spiritual matters. The fact is that the idea of an autonomous individual human, a ghost of independent reason in the machine, flies in the face of all we know about humanity.

I’ve discussed recently how what people mean by “reality” is primarily the set of public perceptions, whether at the “folk” level – “those tall woody things are ‘trees'”, or the culturally-conditioned intellectual level, “Gravity made that tree-branch fall,” or “Apes are nearly as highly evolved as we are.”

We learn those categories and relationships primarily through language. Our four month old grandaughter has just been staying, and her mental development since August is astonishing. But a large proportion of it is due to interactions with other minds, and of course primarily with her mother. “What a beautiful smile!”, “I love you, Baby!” “Look at funny Grandad!” are the constant input of our minds to build her mind. And what is being given and received is the mental structure of our world, represented in the English language we speak (plus a fair smattering of silly noises). As she gets older, the net of human involvement will grow wider as she becomes socialised, then educated in the school meat-grinder, then independently searching out knowledge (ie other minds) through stories,  or My First Big Book of Dinosaurs, or papers in Nature, or books by Owen Barfield.

And when she starts to explore the “non-human” world it will, in fact, be through the communal language of thought we have given her, using the shared mental concepts she has been taught and has accepted, rejected or adapted to her needs, and in the socially conditioned ways indispensible for all such activity, whether the tightly-knit system of the scientific community, or the less formal system of the hiker’s club or the worshipping church.

Any human being, then, is actually a boundaryless system centred on the individual soul (meaning the entire individual), but extending out to, and holding within it, the whole of humanity, and the whole of humanly perceived reality. I remind you of Roger Scruton’s words:

One can see that those rational individuals never, in fact, cease from being also inextricably participants in those communities. The “autonomous human being” is as incoherent a concept as the “autonomous nerve cell”. Yet the non-participatory mindset has come increasingly to rule our societies.

My other grand-daughter recently showed me the Brownie promise she’s successfully memorised. The original Brownie promise started with doing ones best, doing ones duty to God and serving the Queen. At some point “duty” gave way to “loving God”, then to “loving my God”. And now it’s to “be true to myself and develop my beliefs.”

See then how (though presumably intended to outlaw sectarianism) participation in the universal (that is, God) has, though indeed in the service of others,  become a question of the autonomous self pulling itself up by its bootstraps, forming its god in its own image, whilst those “others” are definitely “other”. And the Brownies are at the socially-aware end of our spectrum, compared to phenomena like the cult of celebrity and selfies. 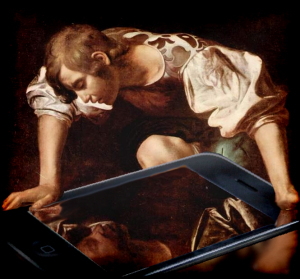 I wonder to what that extent entirely artificial and sharp divide between the “self” and “the world”, that led to the philosophical angst of the Existentialists, can be held accountable for the recently reported increase in child-suicide attempts over here?

[Young Minds] Campaigns chief Lucie Russell said: “An increase in under-11s needing mental health services is a sad and very worrying indictment of the society we live in and the pressures children face.

“Every day we hear about the unprecedented toxic climate young people face in a 24/7 online culture where they can never switch off, where they experience constant assessments at school, bullying, sexualisation, consumerism and pressure to have the perfect body at a young age.

“This leads to thousands of young people including children suffering a range of mental health problems such as anxiety, extreme stress and depression as these statistics show.

Barfield was not wrong in predicting potential disaster for the society of non-participatory consciousness, where we strive to be ourselves, rather than recognising ourselves to be part of something bigger.

We are so much more than ourselves.