The eclipse of the camel

Well, a near total eclipse of the sun occurred here in Britain yesterday, and I was in a position actually to take some photographs. To be precise I was pulling up brambles behind our garden fence, so in a perfect south-facing position. Here’s what I got: 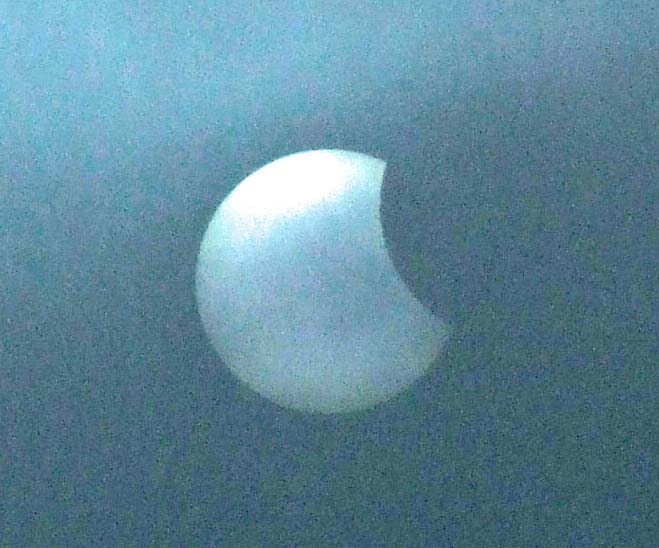 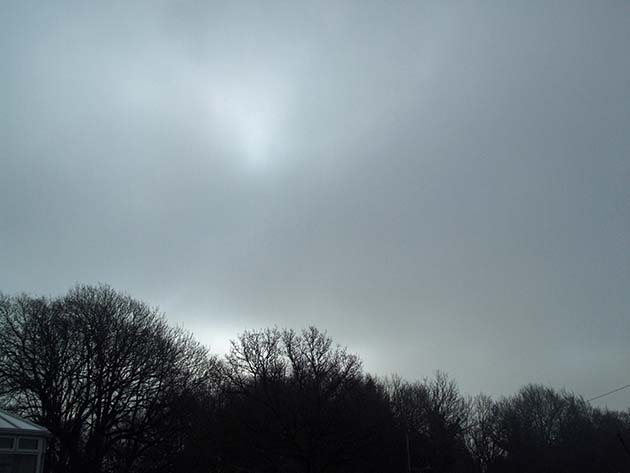 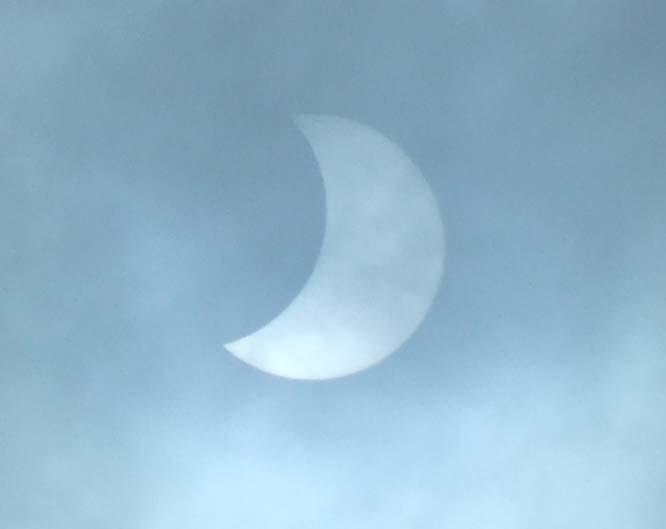 Yes, unfortunately the French sent some smog across the channel in revenge for Agincourt, resulting in a nebular eclipse of the sun. Still, I actually saw more than my daughter did sitting outside Greenwich Observatory, and it was a suitably apocalyptic morning as we did get some realistic gloom and chill, the mains water was mysteriously cut off and one of my neighbour’s sheep died in lambing. I forgot to ask him to check its omens before the knacker’s van arrived. As soon as the eclipse had finished, the cloud cleared and the rest of the day was bright and sunny.

Although I’ve seen a few partial eclipses over the years, I first pencilled in the next total eclipse in 1959, 40 years before it actually happened, after reading the date in The Boys Book of Astronomy. Conscious of the booking, I bagged the time off work at the start of 1999 before anyone else could, and motored down from Essex to South Devon to see it with my Australian pastor, a keen astronomer. In the event it was an overcast day, but in a way that made it even more awe-inspiring: I could imagine some simple farmer in times past suddenly finding it had gone dark without warning and being – as I was even with warning – terrified. If you’re interested I recorded my impressions soon after the event here.

Tonight’s sunset was glorious, as if the sun were our to prove it’s not finished yet. Apparently, about two Fundamentalists in America predicted the end of the world, and the UK Independent printed the story as “‘Beginning of the end of the world’, say Christian pastors”. The usual cretinous crowd of anti-theists occupied most of the comments with their mantras on the stupidity of religion. A rather larger number of secular but even more stupid head-teachers forbade their children from going out to watch because of health and safety concerns – well yes, we all know several people who’ve gone blind during solar eclipses, don’t we?

Several websites – including BioLogos I see – [update – the BioLogos link seems to be based on erroneous information. I beg their pardons!] are at pains to point out that the size and distance of our abnormally large moon, and so the possibility of total eclipses, is nothing to do with cosmic fine-tuning, but pure coincidence. I wonder how they know? But I have read one theorist who suggests that it was the phenomenon of eclipses that got astronomy, and consequently the other sciences, kick-started in ancient times. Like the aurora borealis (also unusually visible in the UK a night or two ago, though further north than here) eclipses are the cosmic events that shake us out of our sense of earthly security, apart from asteroids which shake us out of earthly security itself. So maybe we should be cautious about dismissing them as meaningless chance.

Anyway, the fact remains that unluckily for me both the big eclipses I’ve experienced have been swathed in cloud. But I’m told there is another one due here in only seventy-five years time. See you there.

Menwhile, here’s the classic Yes track And You and I, which begins with a Steve Howec piece called Eclipse – much to be preferred to the Klaus Nomi song on the same theme, which carries the danger of making your eyes water.

10 Responses to The eclipse of the camel