I’m far from the first person to point out that when Copernicus turned the Universe inside out it wasn’t in order to knock the earth off its perch of geocentric pre-eminence in human thought (as the modern so-called “Copernican Principle” implies), but if anything to make it, for the first time, one of the heavenly bodies. 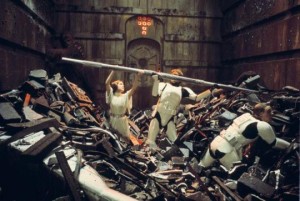 In classical Aristotelian-based cosmology (though not in biblical cosmology), the earth was the sump into which all the rubbish of the universe dropped. It was rather reminiscent of the garbage compactor at the centre of the Death Star in the first Star Wars film. I’ve also recounted how Arthur Lovejoy’s work on The Great Chain of Being shows that the real astronomical revolution was not so much heliocentrism as the removal of the circumferential orbit of the planets as the limiting factor for the size of the Universe. 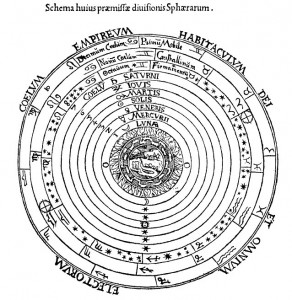 In Ptolemaic representations the planets revolve in the last sphere before reaching the (presumably) infinite uncreated Heaven of God. The Sun had long been calculated to be about 90 million miles away, thus giving an idea of how far, per impossibile one would have to travel to reach Heaven’s door. Whether it would be opened to you was another matter entirely.

On one hand, Copernicus opened the way to a much bigger Universe. All the stars began to be seen as distant suns like our own, rather than as lights on the outer sphere of the cosmos. Again, I mentioned in the second column linked above that the seventeenth century saw a resulting explosion in speculation about extraterrestrial life, not least amongst Christians. Generally, the principle of plenitude (that there are no gaps in the created order, but all possible things have been created) suggested that, since the gulf between God and man is so vast, most of these ET races would be vastly superior to us to fill that gulf.

In one sense, then, the ongoing process of enlarging our idea of the Universe increased its dignity, and the right to be called the abode of the infinite God. If not actually infinite, the actual measurements increased exponentially – it’s hard to believe that even at the start of the twentieth century, the existence of galaxies beyond our own was still controversial: the universe was c100K light years across. Now look at it! Theologically the emerging realisation of the world’s smallness did not cause any problems for the traditional theology. God, after all, being infinite, ought to be quite at home in an infinite Universe.

On the other hand, the Copernican system took away with one hand what it gave with the other. As the cosmos got larger, it also became more like earth in its substance. There was no longer a unique element, aether, from which the heavenly spheres were made. If the stars were like our star, they presumably had planets like our planets, and any life would, presumably, be likely to be as physical as ours. Fantasy writers began to envisage encounters with alien people rather than angels.

Perhaps that’s one reason it began to be harder to see “outer space” (as it was now scientifically, but quite erroneously, called) as being the abode of God. “Space” doesn’t consist of uncreated light, but of vacuum, and energy, and clouds of gas, and lumps of rock. Astronautics began to show that those lumps of rock, whilst fascinating and instructive, weren’t anyone’s idea of paradise.

And so Christians tend to perfom conceptual gymnastics in translating something like the ascension of Christ into symbolism, whilst retaining it’s physicality. But actually, I think it’s largely a problem of our careless theology. For in the biblical teaching, heaven was never God’s native, uncreated environment, the home in which he relaxes with his own when he’s not busy keeping the world together. Solomon says:

Behold, heaven and the highest heaven cannot contain you, how much less this house that I have built!

Heaven is conceived, rather, as the part of God’s created, “cosmic temple” that’s inaccessible to man, but in which he condescends to dwell, in some sense, for the sake of that creation. One of God’s attributes is “immensity”, which doesn’t mean “bigness”, but “lack of measurability”. It’s a suitable reflection of his infinity and glory that the heavens should be vast; the vaster the better, and the developments in astronomy have only served to confirm that glory. But he’s greater even than our largest concept of the cosmos, whilst being equally capable of being encompassed, in his totality, within a room, or an atom. None of them can contain him, because “containing” has to do with spatial dimensions, and God doesn’t do dimensions.

Properly conceived, such considerations make it possible to rehabilitate the idea of the physical heavens as the “actual” dwelling place of God, in all the ways that Scripture envisages. Looking out at the stars on a clear night may still be as spiritual an experience as standing in the courts of the Jerusalem temple, filled with the shekinah, would have been for Isaiah. In fact, the parallels (as Solomon saw) are pretty close. For in his inauguration prayer, Solomon saw that his “house” could not be the real dwelling for God, any more than the heavens themselves could be, but rather that God chose to put his “Name” there, to be present in a particular way for the particular purpose of Israel’s prayer and worship.

That presence was represented spiritually in the shekinah glory, but also in the strictly regulated ritual which saw even the High Priest entering the most holy place only once a year (and then with bells on his robe so people would know he hadn’t been struck dead!). But nobody was under any illusion that, physically, the temple was built of timber, stones, cement and so on. Not only did conquering invaders desecrate the space and were disappointed that the holy of holies was empty, but every priest would have seen spiders catching flies on the very veil of the inner sanctuary. In fact, this intimacy with the humble creation is actually celebrated. There’s a lovely verse in Psalm 84 that says:

Even the sparrow has found a home, and the swallow a nest for herself, where she may have her young – a place near your altar, LORD Almighty, my King and my God. 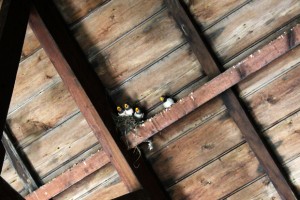 Now our own swallows are on the point of migration, but we only have them at all because they could fly into our dry stable and build a nest on top of the light fitting. Many an old church in Britain has its swallow nests inside the “sanctuary”, together with the attendant droppings and pieces of egg-shell. I doubt the Jerusalem temple was any different – if a pair found its way into a corner above the incense altar no priest was going to commit sacrilege by climbing up a ladder to dislodge it. The creation did not desecrate the genuine holiness of the temple by treating it as its own. The presence of God was real, but was also a “symbolic” (in our impoverished language) representation.

And so, I suggest, it must be with the heavens. The fact that one can see craters on the face of the moon, dry river-beds on Mars or (perhaps) bacteria or even bipeds on some distant planet does not affect the representation of the heavens as God’s dwelling in our mental and spiritual lives. The fact that we can send space junk or the occasional astronaut to desecrate those worlds doesn’t make it any less his “holy place” than Titus entering the holy place of Herod’s temple did. After all, it’s going to be an awful long time – and probably never – that we’ll be able to treat anywhere beyond our atmosphere as “home”. They can never be ours as the earth is ours.

There are many reasons why it’s good to be able to look out at the Milky Way and know it’s not going to be populated with cheap hotels or advertisements for Coca-Cola. One of then, still, is to understand that God can still make it his dwelling, and find it too cramped. 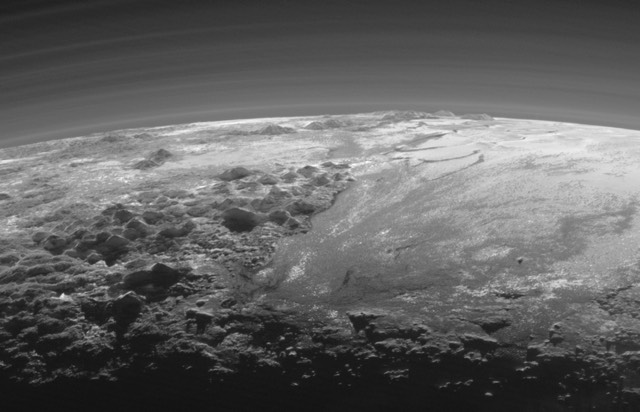 7 Responses to The Copernican Principle revisited