Beauty and the beast

There is a small animal park near us. It doesn’t really qualify as a zoo, but it’s a great place to take small grandchildren. When we’re not waylaid by the children’s playground, I get a kind of Goethian pleasure in seeing how each exotic species, especially the birds, when seen in life, has its own unique and holistic character (with the possible exception of the llamas, which look as if they were made from leftover parts of a kit). Goethe wrote:

We conceive of the individual animal as a small world, existing for its own sake, by its own means. Every creature is its own reason to be. All its parts have a direct effect on one another, a relationship to one another, thereby constantly renewing the circle of life; thus we are justified in considering every animal physiologically perfect.

Star of the show – and a hit with our one-year old granddaughter – is a pair of plains zebras, with a decent paddock just across from the red deer and before the wallabis. They’re one of those creatures that, for some reason, inspire the evolutionary mind to ingenuity, or at least their stripes do.

To the San Bushmen, zebra stripes were an acquired characteristic when an ordinary horse got burned in a fire started by a baboon. Lamarck probably thought the San had it covered, and so he engaged himself elsewhere in naming a striped cone-shell as Phasmoconus zebra.

Darwin, of course, needed a selective explanation, and in The Descent of Man cited an experiment in which a female zebra would only accept the advances of a donkey when painted with stripes to enlist his fall-back of sexual selection. Apart from that doing nothing to explain the evolution of the female zebra’s preference for stripes, as opposed to (say) singing arias from La Traviata, it does even less to explain how the cut-throat evolutionary race for the most sexy stripes could be overturned in a moment by a badly painted donkey.

Wallace disagreed, and said that the stripes, which he thought blend into the background in twilight or moonlight, act as camouflage at zebra’s most vulnerable time. Darwin in return snorted, in effect, that they stand out like a sore thumb. The idea of camouflage, in dappled light or long grass, has recurred since, but hasn’t been confirmed as plausible even in the case of dichromic predators.

Another common Darwinian solution is that multiple striped animals moving in a herd confuse predators by so called “motion dazzle”. But this has been dealt a near-fatal blow in the last year or so by experiments showing that humans using a computer sim. can zap stripey objects in motion far more easily than plain ones. And apparently it’s unlikely that the usual predators can even see the zebra’s stripes at the relevant distance. 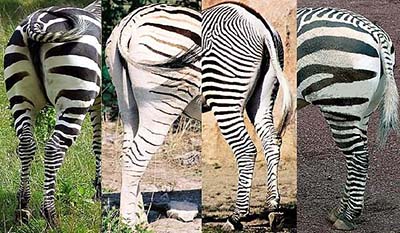 But the stripes are too iconic not to be given an adaptive explanation in Neodarwinism, and a series of papers in the last few years have suggested that stripes don’t confuse lions, but biting flies like horseflies and tsetse flies, which normally home in using polarised light, but have been shown to bite less often on striped skin (the optimum thickness being close to that of zebras – though that actually varies widely), presumably because the stripes do something to the polarisation (maybe some reader with a pair of polaroids should check that out?).

Jerry Coyne makes a very good fist of championing this theory in two posts on his blog, the second being the relevant one. The researchers have lots of bases covered, it seems: horseflies occur where zebras don’t, but not vice versa. The flies can plausibly be seen to apply evolutionary pressure both because they can take up to 500ml of blood in a day from an unlucky animal, and they carry serious diseases. And lest one should say that most other animals on the plains manage these risks without stripes, they point out that this may be due to the shorter hair length of the zebra.

Like all adaptive explanations, though, that still leaves unanswered why zebras didn’t take the less complicated route of growing slightly longer or thicker hair like non-striped herbivores (the developmental complexities of zebra stripes make them even an evo-devo icon, mentioned in Sean Carroll’s Endless Forms Most Beautiful). Nor does it explain the continued success of all the other species that get bitten by disease-ridden flies to keep the latters’ numbers up.

Coyne mentions, in passing, the quagga – rendered extinct by hunting after long success as the southern sub-species of the plains zebra. These (according to the cladogram in Coyne) evolved from striped ancestors, but managed to lose most of their stripes despite there being plenty of horseflies (if not tsetse flies) within their range. 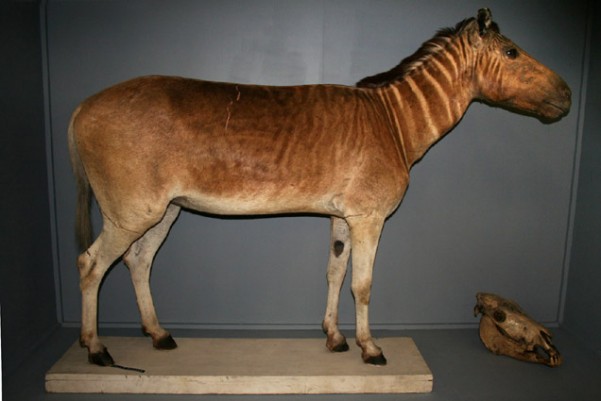 But there’s no doubt a perfectly plausible adaptive explanation for that, as Larry Moran posts in his own blog about zebras. He quotes Gould and Lewontin:

First, the rejection of one adaptive story usually leads to its replacement by another, rather than to a suspicion that a different kind of explanation might be required. Since the range of adaptive stories is as wide as our minds are fertile, new stories can always be postulated. And if a story is not immediately available, one can always plead temporary ignorance and trust that it will be forthcoming …. Secondly, the criteria for acceptance of a story are so loose that many pass without proper confirmation. Often, evolutionists use consistency with natural selection as the sole criterion and consider their work done when they concoct a plausible story. But plausible stories can always be told. The key to historical research lies in devising criteria to identify proper explanations among the substantial set of plausible pathways to any modern result.

For Moran himself suggests the whole adaptive idea may be wrong, and that one ought first to examine the null hypothesis, which is now (according to Joshua Swamidass and many others as well as Moran) neutral evolution.

The very confirmation of neutral theory as an important part of evolution actually does tremendous damage to the kind of explanations above. That’s not so much because it proves any of them wrong, but because all of them might be. The whole industry of narrative accounts of evolution depended on some adaptive story being what happened: you just needed to construct one that was plausible. But now you can no longer generalise, but have to make a detailed case for what happened in any one instance – which is a whole lot of work, if it can be done at all. And what kind of science is it that can make no predictions, but just list data?

Neutral theory appears pretty unclear on just what it does and doesn’t explain – Kimura insisted that natural selection is still an important mechanism, but proceeded to say that most of that that is purifying selection, simply weeding out the mass of disasters that unguided mutations cause. Adaptive selection is seen as a mechanism of fine tuning under neutral theory, but to what extent seems to vary.

On the one hand, I’ve heard it said that neutral evolution is responsible for the genotype, and natural selection for the phenotype (as if they were separable apart from some third organising entity – a concept that may well be lurking in the idea of the genome as a database rather than a blueprint).

On the other hand, neutral theory is also seen as an adequate explanation of phenotypic forms – as seems to be behind Moran’s article. The idea, I guess, is that it’s wrong to look for explanatory reasons for anything in nature: the stripey zebra, the tall giraffe, the exquisite bird of paradise, the massive whale or titanosaur. These “endless forms” arose primarily by drift, evolution by near neutral mutation being much less stringent than Darwin thought, and happen to be able to survive well enough to get by. Lions can catch more striped zebras, yes, and maybe tsetse flies are an irrelevance – but they don’t kill enough to make the stripes fatally deleterious. Yet as Simon Conway Morris says in discussing myths within evolution:

The myth of “well, it will do”, the belief that just because evolution is constrained with what it can employ the end-products are near-disasters of engineering. The reverse is the case: things don’t work fairly well, they work superbly well. 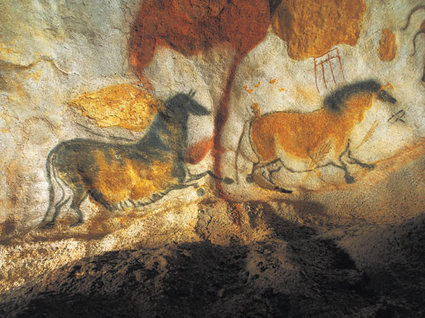 Yet in favour of neutral drift to explain the zebra’s markings is the fact that ancient European cave-art, back in the pleistocene, shows horses with quagga-like stripes: and tsetse flies are hardly likely to have been a menace in the ice: perhaps horses just have a propensity to do stripes sometimes.

But let me take you back to the little animal park in Axminster. There’s a nice little label by the paddock relating to the zebras, and whilst it doesn’t say much about anything I’ve said in this post about the evolution of their stripes, it does mention one interesting thing: that in several African cultures, the zebra is considered the epitome of beauty. Unlike European horses, this can have nothing to do with their use as pets, or draft animals, or cavalry mounts – they are simply, one supposes, known to be wild and extraordinarily beautiful.

It was Darwin, of course, who talked of “endless forms most beautiful” long before Sean Carroll used it as the title for his evo-devo book. And Darwin no doubt had in mind that form follows function, and that what functions beautifully tends to be beautiful. Yet Darwin, in The Descent of Man also quotes W J Burchell, who wrote of a herd of zebras: “their sleek ribs glistened in the sun, and the brightness and regularity of their striped coats presented a picture of extraordinary beauty.” Darwin here is thinking purely aethetically. 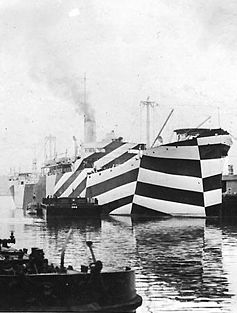 But actually it’s quite hard to make the connection of functional beauty with most adaptive explanations of zebra stripes. There seems no reason why camouflage should be especially beautiful: military jackets don’t usually become design icons, and when they tried using dazzle camouflage on ships in the First War the results were less than aesthetic. Neither is it easy to see why markings designed to be offputting to biting insects should inspire the human heart any more than the smell of DEET would.

As for neutral evolution, surely it has been known since Plato and Aristotle refuted Democritus that chance alone can bring no order, and that includes the order of the aesthetic. It is surely the most profoundly unphilosophical nonsense to suggest genetic drift to be the primary author of “endless forms most beautiful.”

Unless, of course, we are simply blinding ourselves (by our methodology, perhaps?) to the orderly mind behind the apparent randomness of the mutations involved in drift, as I suggested here. The beauty of the zebra may not be the only, or even the primary, reason for its existence in nature. But it may be an indicator that the zebra is that way for good reasons, and not fortuitously. 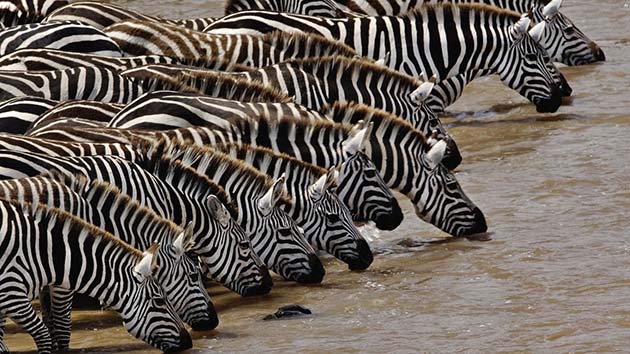 4 Responses to Beauty and the beast