With a large tome in the post from Amazon, and a trip to the beach imminent, I picked the thinnest unread book on my shelves to take. This was part of a job-lot I acquired last year from a Baptist minister, and was The Clockwork Image, by Donald M Mackay: at 111 pages even shorter than my online book God’s Good Earth (plug). Sadly most of his books are out of print now, though he was one of the most important (and both theologically and scientifically competent) writers on science and faith until his relatively early death in 1987. See this obituary from the ASA.

McKay’s credentials as a scientist are impressive, and in particular he did much early work on information theory, including the exploration of meaning in information, in relation to brain function. He exchanged scientific ideas with Alan Turing, and philosophy of science with Reijer Hooykaas (whom he encounted through the great preacher, Martyn Lloyd-Jones). His complementarian view of science and theology, in relation to the concept of the soul and the mind, inherits the unified “hyelomorphism” of Aquinas (though I’m not sure how aware of this he was) against Cartesian dualism and its descendant, reductive materialism (for which he coined the term “nothing-buttery”). It also anticipated the concept of information as an immaterial, but embodied, entity, as it has been stressed in much ID writing (for example, in his accounting for the resurrection of the body as the same information in a new kind of matter).

Theologically, he grew up in Scottish Calvinism, and his emphasis on the sovereignty of God, like that of people like B B Warfield before him and David Wilcox afterwards, is arguably what enables him to maintain both a high view of Scripture and a receptive attitude to science (though I must add that he shares also in the tradition of Arthur Eddington, who was a Quaker).

What is more, this doctrinal approach enables him actually to say something substantial about the interface between biblical faith and science: although he writes of the separate spheres of science and theology, one should not mistake his view as being like Gould’s non-overlapping magisteria, or the similar compartmentalisation between science and “simple faith” (with a great gulf named “mystery” placed in between) about which some of us complain at BioLogos. Rather, the distinction is clearly dealt with in terms of higher order differences between, for example, matter and information.

He’s concerned both to give full freedom to, and to maintain proper boundaries for, science (I guess Joshua Swamidass would love him, if he doesn’t already). He also (as is rather sad to relate) bewails the illegitimate imposition of materialistic positivism on much science, and calls on Christians to be the first to purge it from their own thought: the sadness is that, 42 years later, New Scientist articles can still take materialistic naturalism for granted in a scientific journal, and many Christians ranging from YECs through IDists to ECs still think in terms of opposing “natural” explanations to divine ones, as opposed to working through how they complement each other in terms of concurrence.

Perhaps the long-established pedigree of Mackay’s approach frustrates me even more in my dialogue mainly with the American Theistic Evolution and Intelligent Design scene, because it was what I grew up with as a Christian: Mackay’s little book was published in the IVP Pocketbook series for Christian students here. If I didn’t read it then, many of those I studied with did. Maybe American students missed out. I can’t help thinking that the apparent lack of influence of his thinking now is for theological reasons – so much of it depends on a Reformed view of sovereignty that has become unpopular in Evangelical circles, especially in America. As one commentator wrote:

The more liberal wing of Christiandom is less accepting of his thinking but finds him one evangelical that they must take seriously.

If one doesn’t want to grapple with divine sovereignty, and wants to maintain a radically autonomous view of freedom, then the integration of science and faith is harder, and tends to be woollier, and less coherent. But McKay

To be fair, a few BioLogos writers have recognised his importance. Deb Haarsma and one or two others have cited his “nothing buttery” in opposition to scientism. But as far as I can tell, only Ron Numbers and Ted Davis (who, none of us will be surprised to hear, recommends all his work heartily) have drawn attention to his wider importance.

Let me cite just a few interesting points from The Clockwork Image.

Without any equivocation, MacKay insists that to science, “chance” must only mean something that happens for reasons unknown to us (epistemological randomness). There is simply no question of their being unknown to God, who is as sovereign over chance events as over lawlike events. But then, he didn’t have to leave room for Open Theism to be “a valid approach”.

An intriguing (if rather difficult) concept is his argument that free choices are logically indeterminate, even were it to be shown (per impossibile) that physical determinism applies to human brain function. Indeed, this logic applies, according to MacKay, even to the sovereign God who determines all events past, present, and future – our decisions are still genuinely free. One of the raisons d’être of Open Theism depends on logical fallacy.

I’ve neither space nor complete enough an understanding to explain it here, but it is, to quote Christopher Tinker, “much neglected”. Incidentally, Mackay elsewhere exposes the fallacy of any link between free will and randomness, confirming the incoherence of the “open process” theologies that have been so attractive to Evolutionary Creation.

Mackay uses a simple illustration of the science-religion interface, with which I’ll close. It has much in common with the idea of God as author which I employed here, only he pictures a TV on which, through some interface (much easier to picture with today’s technology than in 1974), and extremely gifted artist might construct an entire imaginary world – his example is a cricket match.

If the artist was good enough, viewers could, by scientific investigation, learn both the physical laws of this world (as cricket balls described near-parabolas when hit, etc), and of course the laws of cricket. MacKay points out that the artist is entirely at liberty to make exceptions to the laws of such a scene, particularly if, for example, he wished to reveal his own presence (and here Mackay has in mind, particularly, miracles). If he did, it would break no laws (for the observed “laws” are, after all, just the habitual and reliable background against which exceptions show up in relief), and would presumably be consistent with the purposes for which the whole “programme” had been made.

MacKay is quick to point out the limitations of this analogy, the first of which would be that, at face value, it is highly occasionalist: the cricketers and crowd, let alone the bats and balls, are not true secondary causes at all, for the artist is the only active agent. But I suppose one could easily interpose what we would now call sub-routines so that the artist used intermediate processes. No human analogy, clearly, can emulate the creation of conscious agents. Nevertheless, the analogy is useful in showing God’s ultimate, and yet intimate, sovereignty over everything that occurs – there is nothing Deistic in it.

I believe that some valid additional insights can be taken from this simple picture. MacKay talks of God as choosing to step into his “TV show” himself, supremely of course in Christ, but also in miracles and so on. He makes the obvious point that miracles must be exceptions if they are to have meaning, and if they are to leave the reliability of the world for us intact.

Yet McKay also has a strong view of Providence. And we may see this as a more everyday example of God’s “coming into” our world to answer prayer, to govern nature and nations – even to bring individuals (rather than mere production-line humans) into being. All this can be consistent with the scientific (or one could even say common-sense) patterns that the world shows.

It might be possible that God creates the world in anticipation of factors such as prayer (so nature would “scientifically” determine from the Big Bang that the border guard will forget to check the bag with the smuggled Bibles). Or it might be that God works somehow through the “chance” inherent in nature to change events in real time. Actually, though, that’s academic: for God, unlike the TV “artist”, actually creates in eternity. His purpose is revealed in events (“I prayed, the guard looked the other way”), and the secondary material causes are put in place to achieve that answer to prayer. To us, it’s always likely that nothing against nature will be found, except that “chance” turns out to have been consistent with what we perceive to be divine purpose.

This leads on to the question of “design inference” – which I think to be consistent with Mackay’s overall vision, and his interest in information theory, though I may be wrong and stand to be corrected. For in his cricket-match analogy, one thing that the viewers would have observed is that the players make apparently random decisions, but towards apparently intended outcomes – they will hit the ball, or refrain. They may choose not to run – or alternatively vary their bowling to outwit the batsman. The viewers would, surely, be entitled to infer that as well as “law” and “chance” there was a thing called intelligent agency (expressed through the humans in the scene). The more subtle would infer that even the existence of laws in cricket implied a determining agent.

Extend the analogy, as MacKay does, to include miracles, and as I do, to include special providence, and surely one can see that viewers would be justified in concluding, if not being able to prove, that there was a determining mind at work in nature. It would be the equivalent of discovering that when a batsman did an unusual stroke, or a bowler an unusual delivery, their team tended to do better than you’d expect. It might be chance, but agency would explain it better.

Let’s wrap this up with another assessment of, and recommendation, for Mackay’s work (if you can get hold of it), by Richard Bube:

I must confess that his assessment of the interaction between science and Christianity was so compelling for me that I cannot tell whether I ever had a truly creative idea in this area that did not have its root in the ideas expressed in one way or another by MacKay. In person [he] was polite, genteel and friendly; yet at the same time he demanded a degree of logical consistency and precision in analysis and expression that marked his comments and reactions. With deeply held convictions, MacKay was sometimes outspoken and consistently uncompromising on his perspective of the relationship between authentic science and an unyielding faith in the truth of life in Christ. 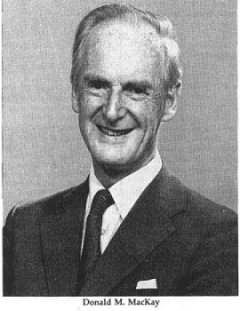 His determined challenging of the popular notion [of] the concept of personal responsible choice, received wide publication and equally wide challenges. His development of the idea of complementary descriptions, each valid in its own domain, and each contributing true insights into the nature of reality, continues to be a source for guidance and inspiration for many, as well as a focus for debate and questioning. As long as he could get people to think faithfully and intelligently about these issues, I think MacKay would be happy.