I’ve written before that miracles are not the most important theological issue I have with methodological naturalism: special providence is, because Scripture describes it as all-pervasive in the affairs of both man and the natural world. God is constantly active, according to the Bible, in managing his household, including by the answering of prayers, and I remain unconvinced that we can properly understand the physical world without somehow accommodating that truth. But nevertheless I want today to consider specifically miracles of healing rather than daily providence, because I’ve been reading about them recently.

Craig Keener’s magisterial two-volume treatment of miracles in part (amongst several other aims) sets out to show the fallacy of David Hume’s claim that miracles claims are extraordinarily rare, and therefore suspect in that respect alone. Keener collects a vast collection of case histories, some extremely well-documented, some less so; and certainly in some cases raising as many awkward questions about the nature of miraculous activity as simply supporting supernaturalism. Hume was just wrong (because he took his limited experience as an Enlightenment skeptic as normative) – miracles are a common human experience (though to what extent they are truly supernatural is another question that is orthogonal to Hume’s claim that they are rarely encountered).

It strikes me that such a widespread phenomenon does pose more of a challenge to Christians disposed towards what Reijer Hooykaas called “semi-deism” than is realised. Many Christians, especially in the sciences, are happy to accept that God did some miracles in biblical times, and might conceiveably do so now – but exceedingly rarely, if at all; for nature normally operates in a law-like way, and the existence of many miracles would disrupt that. That’s exactly the same case that theological cessationists make – and probably the ultimate source is the same Enlightenment rationalism. Keener’s evidence suggests that they are, in fact, not uncommon at all, making them a significant element in our mundane reality rather than an anomaly one can ignore.

I can confirm this from my career in family medicine, working in a Christian practice, during which I was also for a number of years in church leadership. Offhand I can remember half a dozen healings that impressed me either because I knew the patients well, or because I was involved myself. So not a big number (there were probably more claims I have forgotten), but a smattering of interesting phenomena.

The couple of cases (in church, not work) in which I was involved in prayer included a young mother having great difficulty getting around with a young baby at a Christian conference because of an acute back injury. A group of us prayed for her, and she immediately reported she had no more pain. Small beer in the miracle stakes, I guess – but providential for her.

The second instance was a teacher who asked after church if I would pray for the bad wrist she’d had for a few weeks. Before I gathered a couple of other members to pray, clinical habit led me to examine her. She appeared to me to have tenosynovitis (and I wasn’t a bad diagnostician in those days), a condition which, in the surgery, I’d normally slap into a splint in extension, inject with steroids, and add dire warnings to rest it because, in a good proportion of cases, it tended to become chronic and had even lost people their livelihoods. Even when my treatment worked, it was usually rather slow to settle. I didn’t say any of that, but it more or less removed any faith I had in the prayer I would offer. I should add that she was a lovely but toughminded believer – I’m pretty sure she felt she ought to ask for prayer, rather than expecting much from it. 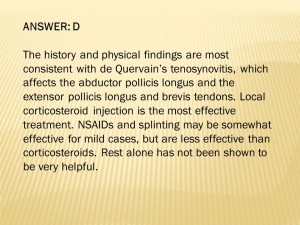 The following week I intercepted her after the service and asked after her wrist. She admitted that her expectations had been low, but said that to her surprise her wrist had felt hot as we prayed, and she’d had no pain since. I rather expected her to turn up in a splint at some later stage, I confess, but she never had a recurrence.

The most amusing case in my medical practice was a rather overweight Christian lady who, for a number of weeks back in about 1983, called us out regularly at night for bouts of severe upper abdominal pain that really didn’t respond to any analgesics. Mystified, I read through her notes one evening and speculated that this might be some kind of psychogenic pain somehow linked to her guilt about being obese. Move over, Freud. But meanwhile my colleague admitted her to hospital one troubled night, where pancreatitis was diagnosed. So much for psychosomatic pain. She was discharged with follow-up the next day, but never had the pain again.

A few months later I included her case (anonymously) in an article I did for The Physician on “psychogenic pain”, basically arguing that I should have worked harder to find the physical diagnosis before jumping to imaginative psychological conclusions, but suggesting that the rather dramatic resolution may have been partly related to her relief at discovering the true cause, since the hospital treatment was actually minimal. A professional colleague’s letter on the correspondence page poo-pooed my assessment and said that, without doubt, when some stress next arose her psychogenic pain would return. But it never did, and she died of something completely different after I retired.

But here’s the amusing part – it was only maybe twenty years later, when I mentioned to her that I’d used her story in a journal article, that she told me what she’d not told me before – that a group from her church had come to the hospital after her admission and prayed for the healing of her pancreatitis. That article would have been a lot less welcome in The Physician, I suspect.

The best case happened to a patient who was also a Christian friend of mine. He was getting increasingly troubling angina pectoris, had coronary occlusion confirmed by angiography, and was on all the pills whilst awaiting bypass surgery. This chap was of a somewhat Charismatic bent, and so I wasn’t surprised when he told me that he’d had laying on of hands at a prayer meeting, and felt sure that he had been healed.

Charismatic he may have been, but he was also a good patient who trusted my spiritual and medical judgment, so despite the fact that he appeared now to be symptom free for the first time in months, I kept his medication going pending a repeat angiogram, which I requested from the friendly specialist in a full explantory letter. Though the consultant was not a Christian, he kindly complied, and was very surprised when the angiogram came back as clear. We gradually tailed off his medication, and maybe fifteen years later he’s still well, according to the Christmas cards he sends.

But here’s the point I want to raise from his case. My profession is trained in a scientific discipline, and therefore under the assumptions of methodological naturalism. However, unlike, say, population geneticists, the luxury of knowing that no non-natural possibilities will encroach on your field isn’t shared by doctors.

This actually makes a difference even in daily practice, quite apart from miracles. It took a series of minor illnesses at a time of personal unhappiness to make me realise that the germ theory of disease I’d been taught for six years completely ignored perhaps the main factor in who will catch most common infections – their mental state. Once I realised that, it explained why I could work close to patients through every new flu epidemic without vaccination and without succumbing – except when there were other pressures on my life, when I was quite likely to find myself off sick with all the symptoms.

Likewise, for my entire medical career the placebo effect was merely something against which to test expensive new drugs: because it appeared to be a case of immaterial mind over matter, it simply didn’t register as a reality to be investigated or utilised under methodological naturalism. I had to learn for myself how to instill personal confidence, and even had to argue with well-schooled colleagues that it mattered.

For these reasons, and others (including the fact that I was seldom engaged in research) I sat somewhat loose to the principles of methodological naturalism: healing a human person is to do with much beyond the merely material, which is why the grass-roots doctor clings to that concept of the “healing arts” as well as “evidence -based medicine”. So in those occasional cases where God seemed to have done the unexpected, I was happy to just shrug, make sure nobody was being gulled, and give thanks.

But now put yourself in the position of the hospital specialist in charge of my friend’s case: he is a cardiologist, and as Maureen Lipman’s character said, “You get an ‘ology’, you’re a scientist!” – this is only a short clip, and it’s funny:

Now, in your case, we’ll say you’re a Christian cardiologist, so you fully support, and even insist on, methodological naturalism in your science, whilst being quite happy to be a “metaphysical supernaturalist” as a human being. It would be interesting to know how you might reply to my new letter once the clear angiogram arrived on your desk, but here’s a harder question.

Some months later, you get a letter from a medical researcher at Oxford University who is doing a study on claimed faith-healings. He has been informed of the case by the patient, and has obtained the necessary permissions for information from him and the GP. He requests a report of the relevant records, and especially documentation of the “before and after” angiograms, together with your own professional opinion of the merits of the case (he points out that previous studies have lacked academic credibilty because of a lack of suitably qualified medical input).

Now, what would your response be (I’d be interested to hear – let’s make it a challenge like Joshua Swamidass’s “miraculous tree” fable)? Possible responses might include:

The issue is a real one. A leading doctor in Britain’s Christian Medical Fellowship, Peter May, wrote a book debunking a sympathetic investigation of healing miracles by another doctor, Rex Gardner. Craig Keener points out a quite surprising anti-supernaturalist bias in May’s book, such as preferring unlikely and unsupported naturalistic explanations to the testimony of doctors actually involved in the cases. (Incidentally, I was introduced to Dr May once, at a meeting in London of Christian leaders, addressed by Phillip Johnson: May had previously surprised me by being the first Christian I’d encountered who railed against the whole principle of Intelligent Design in the CMF journal: could his stances on ID and on miraculous healing somehow be linked to methodological naturalism somehow encroaching on his Christian metaphysics?)

My point is this: if the supernatural is not something that happened long ago, safely far away and exceedingly rarely, but something that drops a brick into the middle of your own work – in this case hard data and a case history strongly indicative of non-natural agency by the very God you worship and proclaim as Lord, then how far should methodological naturalism constrain what you are willing to discuss, or confess openly, beyond the constraints of methodology in your scientific understanding of the world?

Data – but is it science?

Training in medicine (which was my career), social psychology and theology. Interests in most things, but especially the science-faith interface. The rest of my time, though, is spent writing, playing and recording music.
View all posts by Jon Garvey →
This entry was posted in Medicine, Science, Theology. Bookmark the permalink.