How regular is normal?

Tom Gilson runs the excellent Thinking Christian blog, but has also made a useful contribution to the recent debate over methodological naturalism. In 2011 he did a multi-part series here on why science neither needs, nor benefits from, MN, and came to the positive point with his alternative here. In the main, he favours a change of nomenclature rather than of practice, because of the ease with which MN, originally coined by a Christian (and not many decades ago, at that) to distinguish it from metaphysical naturalism, has actually become a potent means of endorsing the mythical link between science and atheism.

Tom did an updated webcast on the subject recently here:

I like the way he starts by showing that, given that the faithfulness of the Christian God in the operations of the natural world was a major impetus for science, it would be as apt to call the current scientific methodology “methodological theism”. That consideration instantly destroys the idea that bringing God into science makes the whole predictability of nature collapse – as if one seriously thinks that God will either run nature or leave it alone according to what methodology one uses.

Instead of that rather loaded term, though, Gilson proposes we should use the term “methodological regularism”. Not only does that get rid of the entirely specious and irreligious, but ubiquitous, concept of “natural causes” being those God has no part in, but it draws a rather better boundary around what is science and what is not. Science, after all, ought to be the study of the repeatable, which is as far as Bishop Butler was concerned, near enough the meaning of natural, too:

“The only distinct meaning of the word ‘natural’ is stated, fixed or settled…”

Nobody, and especially no religious scientist, should fall into the trap of thinking that (say) the origin of life was a fluke, but a natural one. What is unique cannot be regular or settled, and therefore ought not to be considered in science (though looking for its not being a fluke is a different matter).

Incidentally this makes me wonder if we on The Hump ought to replace our term “Classic Providential Naturalism” with “Classic Providential Regularism.” It could then be confused with “cardio-pulmonary resuscitation” rather than the less prestigious “community psychiatric nurse”. But I digress.

On the other hand, one could legitimately do scientific research on patterns of apparent miraculously answered prayer, for although miracles are supernatural and exceptional, enough are claimed to occur to make comparative study possible. Are some diseases healed more than others? Are the rich less benefited than the poor, or vice versa? Perhaps these are unseemly enquiries, but why would they not be scientific?

Likewise the inconsistency of excluding non-divine but, like us, created immaterial (perhaps) agents, like angels, from science would no longer apply. After all, we cannot simply assume angels are non-investigable because they are not flesh and blood. How do we know what they are made of without investigating them, since Scripture doesn’t say? Suppose, for example, that they were created from dark matter and constitute most of the universe’s mass? Would that not be scientifically important? Under “MR” the sole criterion for science would be not the indefinable and theologically unsound “natural or supernatural?” but “regular effects or not?”

Although there are sadly too many vested interests in methodological naturalism for Gilson’s suggestion to be adopted (he is excellent at pointing out the psychological power of MN for atheists in positions power and against believers in a minority), I like its intellectual approach. It reminds us that the world has much predictability, and that that feature is the stuff of science, practised both by those who love God enough to bring him into the lab and those who exclude him.

For some reason, this reminds me of the philosophical wisdom about such regularity that the Small faces put in the mouth of Mad John the Hermit back in the sixties:

On the webcast, a questioner asked Tom how science could deal with miracles under his proposal. The semi-deists amongst TEs often “allow” the Resurrection of Jesus, and maybe a few New Testament miracles too, but the predictability of their world seems threatened by “too many” of them – one reason they reject the likelihood of evolution involving any divine powers beyond the regular operations of laws (a dubious idea, when you think of evolution’s unpredictability). The questioner spoke of (I believe) half a million miracle claims a year, which is not unrealistic given the survey material I quoted from Craig Keener here, which suggests that maybe 500 million people in the world claim to have witnessed a miracle.

As it happens, I can augment those stats with a straw poll I did when preaching in my own non-Charismatic English village Baptist Church last Sunday. Remember that Britain has had over 200 years of anti-supernaturalism: we almost invented it in the person of David Hume. My aim in the sermon was to discuss how we deal with non-answers to prayer, but I started by asking how many people in the hundred or so congregation believed they had witnessed what they would call a miracle. Roughly half the hands went up – consider the implications of that for the idea of an unbroken “nature”.

Now Tom Gilson (on the podcast) includes, amongst his arguments for the Christian God’s being reliable, the fact that a God of wonders must create a predominantly mundane world against which one may recognise “signs”. But as he points out, all those experiences of exceptional circumstances, whilst certainly reducing the territory that science can stake out as its own, do nothing to reduce our expectation that the world will generally run as normal. It’s not just J B S Haldane who does experiments without expecting God to mess up the results: the believer in India who miraculously received their sight back expects to see the same familiar surroundings from then on. Miracles can be exceptional without being unknown, and the world will be just as safe for the skeptical scientist and the theological cessationist to deny the evidence of everyone else’s senses. Gilson describes miracles, vis a vis science, as “noise” – an issue all true science must deal with daily.

That shouldn’t surprise us, though the Deist attachment to the world as a closed causal system dies hard. After all, we live with a reasonable degree of trust in the habits of other human agents without being surprised if they sometimes break with habit. I rely on the pipes bringing water to the house – I have no other supply, if the beer runs out. But occasionally it fails – and that’s a good reminder of my dependance on others, just as irregularities in the world shake any notion that it can do without God.

Miracles, then, even though they seem to be less outlandish than we are taught by our society, don’t threaten science so much as remind us of its limitations. But a bigger problem for “regularism”, it would appear, is “special providence”. I point out in Chapter 1 of my book that the biblical view of God is not of One who lets the world run itself by regular laws, rarely intervening in miraculous acts, but of One who not only cares for each part of Creation personally, but uses nature instrumentally in his government of the world. It’s not, then, a question of whether God “can” control the weather, but that the weather is an instrument which God routinely keeps in his hand.

One might ask (indeed one ought to ask) if that kind of God is more of a threat to science even than the one who seems, in Christ at least, to act miraculously in the lives of a good proportion of the world’s population, but not in most of the world’s events. How can God act providentially, though, without demolishing the whole framework of regularity on which science depends?

The first answer is the same as that for miracles: if God truly does govern the world providentially, in the event science still works well enough to be useful, if not strictly enough to maintain the belief that natural law is a seamless garment in the operations of the universe. I liked an observation at BioLogos by “Glipsnort” (whom I believe to be the alter-ego of computational biologist and population geneticist Stephen Schaffner) that since the full scientific understanding of any real-world system of constantly changing variables would require, even if it were possible, more computational resources that the universe possesses, they effectively do not exist for us.

That is as much as to say that all science can do is abstract simplified statistical models of reality that more or less work. Sy Garte nailed the same idea in a perceptive blog post not long ago. There is plenty of room for God to be purposefully pulling the strings of reality (which I stress is not his “interference” in nature, but doing nature). Indeed, I have pointed out before that the statistical regularities of nature may in part actually be an artifact of the way God habitually works.

But once one brings the great network of chaotic systems in the universe under consideration too, reality has all the unpredictability which a caring and governing God might be expected to produce according to the biblical worldview. We are wont to consider chaotic systems as “deterministic”, but only in the sense that if we were a Leibniz Demon (that is, God, actually) and knew the precise positions and courses of all the individual elements of the system, we could predict it. Since we are not, such a claim of determinism is a completely empty naturalistic faith statement – and one that assumes such systems can run on their own without God. So a Christian who makes such a statement has slipped from methodological naturalism into metaphysical naturalism (for as Glipsnort said, such a system is forever beyond the reach scientific methodology other than statistically).

If, instead, we take on board the lessons of Tom Gilson’s “methodological regularism”, we will recognise that to the extent that chaotic systems are not in practice predictable, they are outside the remit of science. The word “natural” for such a system is meaningless  – what is not predictable is not subject to methodological regularism, not amenable to science, and so cannot be classified as “natural” on any rational basis. Does that make chaotic systems supernatural, then? I’m not sure what you mean by that – it’s a concept alien to science, and meaningless theologically. Both “natural” and “supernatural” should be consigned to the lake of fire forthwith as originating from Old Nick.

But it would be true to say that chaotic systems are the ideal manifestion of God’s governance of the physical world, which theists are supposed to believe in, aren’t they? The psalmist was not naive, but rather astute, from a philosophy of science point of view, when he wrote:

He makes the clouds His chariot; He walks upon the wings of the wind; He makes the winds His messengers, Flaming fire His ministers. 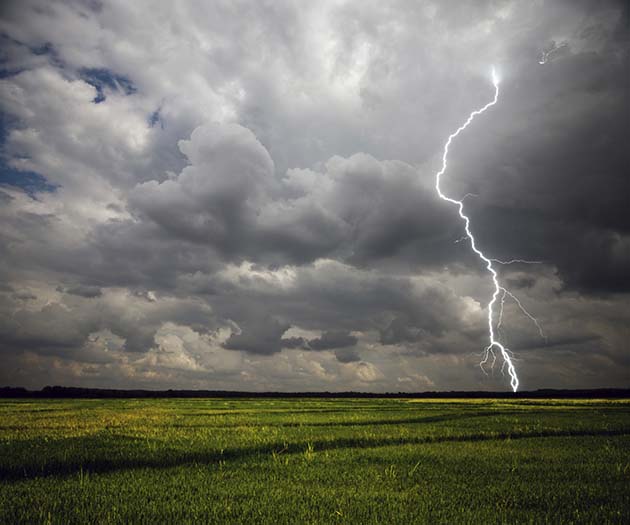