Bible scholar Michael Heiser specialises in slightly more esoteric aspects of the Bible, such as what is taught about supernatural beings in it (often passed over in a mixture of monotheistic embarrassment and academic naturalism). He is also interested in astronomical questions, and is a champion of Ernest L. Martin’s detailed theorising about what the Magi saw that took them in search of the child Jesus, and when it occurred.

Merely to sketch his argument, though you can read the whole book here, Martin believes the consensus chronology that puts the death of Herod in 4BC is suspect, as indeed it is, for Josephus apparently places it at 3BC, but modern scholars have stretched it by a year to accommodate a lunar eclipse Josephus associates with it. There is some coinage dating from his successors that fits a death of 4BC – but not 3BC, and Martin has argued why this coinage does not preclude his later death.

If we accept Martin’s explanation for these contradictions, a far better lunar eclipse candidate, because total rather than partial, and occurring at a more realistic time of year for the chronology, occurred in 1BC. This accords, too, with early Christian traditions, and as Martin points out, they had far more Roman historical resources than the vestiges left to us.

The net result is that his chronology enables Jesus to have been born when a significant set of astronomical/astrological events occurred, in September 3BC and in December the following year, when the Magi are likely to have visited. These events were certainly spectacular, although we know too little about the astrological system of the Magi (and that of Jewish astrologers, who certainly existed) to be sure of exactly what made them discern the birth of a Jewish king in them, as opposed to events significant to Caesar Augustus in the same year.

The events involved a sequence of unusual planetary conjunctions. In July/August, the “king” planet, Jupiter, came into conjunction with Venus, significant (astrologically speaking) of fertility, in the constellation of Virgo, also related to fertility, but linked in Jewsish eyes with “Virgin Israel” of Jeremiah and other prophets. Significantly, this conjunction occurred when the sun was also in Virgo – suggesting astrologically the presence of God himself in these events. Furthermore, the Magi would have been aware of the prophecy about a virgin giving birth in Isaiah, and his name “Immanuel, which means ‘God with us'”, which was by then being treated messianically. I suspect that the idea of Israel (as God’s “virgin bride”) bringing forth David’s successor was more in their mind than the literal virgin birth that occurred.

Jupiter then moved from Virgo into the constellation of Leo (whilst Venus, and the sun remained in Virgo), eventually coming into unusually close conjunction with the bright star Regulus, which means “little king”, and was associated with royalty. In fact, owing to the vagaries of Jupiter’s observed orbit, this conjunction recurred three times, making it all the more emphatic an event. Although various constellations, it seems, were associated with the twelve tribes, the association of King David with the “lion of Judah” would have been interesting, and may well have been more than that in the Magi’s system. So we have a doubly emphasised virgin mother (Virgo and Venus, in the presence of the sun) leading to the association of the king star Regulus in Leo with the king planet Jupiter.

The Jupiter-Regulus conjunction was actually closest on September 14th, 3BC, but there’s more. Martin draws attention to the “sign in heaven” described in Revelation 12, and suggests it builds on a tradition about the birth of Jesus. And this is actually highly plausible. I’ve taught on this passage, without hitherto considering any astronomical links, but only the apocalyptic imagery.

A woman crowned with 12 stars (and clearly, therefore, signifying Virgin Israel) gives birth to the Christ. A red dragon, the devil, waits to pounce as soon as he is born, but the child is carried up to God’s throne (signifying Jesus’s resurrection and exaltation). The vision develops into an interesting (but to this post irrelevant) consideration of Israel’s role in the gospel age. Before now, though, I’ve not tried to place any significance on one aspect of the original vision: that the woman is “clothed with the sun, and has the moon under her feet.”

The meaning of this becomes less cryptic when seen in astronomical terms. The constellation of Virgo has 12 visible stars in the region of her head (visible meaning magnitude 6 and above). And at the time the astronomical light-show Martin describes, the sun was in the midst of Virgo for several weeks, but the moon “at her feet” for only a matter of a few hours after sunset (and therefore an astronomically calculated, not an observed, event) on September 11th, 3BC. At this time, and this time only, Jupiter in close conjunction with Regulus would have been seen rising (“in the east”).

I would see John’s vision as being only partly based on the “astrological” events (which in his vision only seem to fix the date and time). It would appear that he sees Virgo as Israel, and the planet Jupiter as the Christ born as the Lion of Judah. But the dragon is quite likely to be linked to the constellation “crouching” below the feet of Virgo, Scorpio (it’s now Libra, but in those days the scales were often regarded as the pincers of the scorpion – a chaos creature like the serpent, cf Rev 9.3-10). The bright star in Scorpio is Antares, which is markedly red and variable. John would then be interpreting the whole night sky at that time, not just the “significant” events, as a sign of Jesus’s birth written in the heavens.

Furthermore, the date of 11 September was, in the Jewish calendar, 1 Tisri, New Year, the date from which the Davidic kings dated their regnal years. What is more, this date fits the biblical narratives of Jesus’s birth quite closely. Maybe 25 years ago, delving in the Knightbridge Library in Chelmsford Cathedral, I came across an ancient tract from 1648 named Christ’s Birth Misse-timed, by “by R S” (Robert Skinner), which was not concerned with stars at all, but worked from the time the priestly division of John the Baptist’s father Zechariah would have been serving in the temple to estimate the birth date of John, and hence that of Jesus (Luke dates Mary’s conception to the sixth month of Elizabeth’s pregnancy). The date comes out as mid-September, which R S states to have been the time the Rabbis also expected Messiah to be born, in order to be ready to celebrate the Feast of Tabernacles on 10 Tisri.

Just as a postscript to all this, Ernest Martin describes how at the most likely time of the Magis’ visit, in December 2BC, Jupiter would be seen in the general direction of Bethelehem, just at the time when Jupiter’s apparent motion across the heavens would cease and then reverse (“apparent retrograde motion”). This would mean Matthew’s description was not impossibly fanciful, but astronomically accurate.

The wonderful thing about these unusual astronomical phenomena – which in any astrological system would surely excite interest – is that they’re easily checked. I asked my own astronomical program to reproduce the night sky on September 11, 3BC, and the result was this: 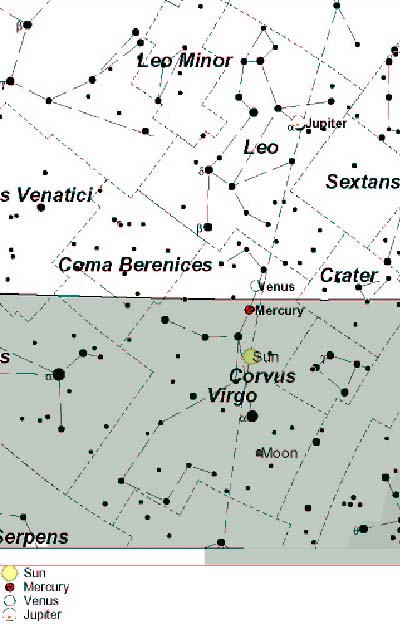 You can see Jupiter and Regulus inseparable at this scale, in Leo; and Venus in Virgo, who is “clothed with the sun” and has the moon at her feet, just as described (except that for clarity I left out the 6th magnitude stars, so there aren’t 12 stars round Virgo’s head!). I also left Scorpio out of the picture.

Now I’m inclined to believe that Martin has a very good case, if one accepts his “fixes” for the problematic timing of Herod’s death. Certainly such astronomical events as I have described make more sense than the suggestions often made about the star of Bethlehem being a supernova (they are so unexpected that surely no astrological system could interpret them usefully), or a comet (which even if an unknown and bright one appeared at the right time, would have undoubtedly have been considered an ill-omen, not a harbinger of a royal birth).

But my closing point is that, even if Martin is quite wrong and some other set of astrological pointers was seen by the Magi, they saw something impressive and significant enough, in the public-domain of the skies, to be interpreted according to their well-developed system as indicative of the birth of the promised Davidic King of Israel. Whatever they saw, they went to the right place at the right time, met the right Christ, and offered suitable gifts which we have remembered since the time Matthew recorded them.

Yet isn’t astrology supposed to be pseudoscience? I wrote not long ago about how pseudoscience gave the world its modern preoccupation with sun, sea and sand. But how did it come to predict correctly the time and place of the birth of the world’s Saviour to a bunch of deluded practitioners of mumbo-jumbo now well and truly debunked by proper science? What was God playing at?

I’ll leave you to theorise!