A few events coinciding set ones mind on interesting tracks.

First, a BBC news item about freedom of speech in universities had the head of a Student Union defending the practice of denying speakers a platform, or silencing them if they do speak, on the grounds of “diversity and inclusiveness”, “safe space policy” and, irony of ironies, “academic freedom”. I see from one website monitoring this that 90% of UK universities now follow such policies (reminiscent to me of the New Left’s hijacking of student politics back in the sixties, only now pervading the whole of university life – Christian Unions have found themselves outlawed on some British campuses). There are people noting it, and bemoaning it, but there are more powerful forces making them powerless to prevent it, it seems.

Second, a piece by Ed Feser on the shameful treatment of no less a figure than Richard Swinburne following his recent address to the Society of Christian Philosophers, its president, on much the same grounds, issuing an apology for Swinburne’s reasoned defence of the historical Christian teaching on sexuality – even though the society had invited him to make it.

Thirdly, I came across a reference to “Neuhaus’s Law”, which I had never encountered before. Richard Neuhaus was the Catholic founder of First Things, and he died in 2009 before the current epidemic of “diversity and inclusiveness” which now dominates, it seems, much of public life and the mainstream news. His “law” states:

“Where orthodoxy is optional, orthodoxy will sooner or later be proscribed.” 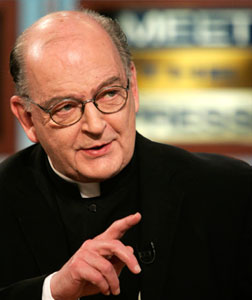 First Things posted an anthology of pieces relevant to this upon his death here, of which the most relevant is the first snippet. The logic of his argument was that whilst diversity may tolerate the odd eccentric who persists in an optionalised orthodoxy, the fact that he considers it to be orthodox (that is, binding in principle on others) makes it intolerable. Neuhaus points out how, in our day, this has been leading to an unprecedentedly intolerant new liberal orthodoxy – which is confirmed by the way universities both in the UK and in America close down on all ideas not matching the new truths, especially but by no means exclusively in the area of sexual ethics.

Since his death, the stigma attaches even to being associated with those institutions which were once orthodox: pastors feel constrained to apologise for hurt caused by the Church’s doctrines even in New Testament times, regardless of any historical context, let alone any divine authority, for that teaching. As for those who still hold to it, they of course accept them as brethren, hating the sin whilst being none too enamoured of the sinner for reminding us it is what Christianity has taught for two millennia. One day, given sufficient pressure, they will get with the program or disappear.

This is by no means entirely new. I remember, in 1987, running into a teenage girl I knew from my old church, just back from her first two terms at teacher training college, where she was majoring in religious education. Her faith had taken a severe beating because it rapidly became clear to her that, not only was Christianity given no special privileges on her course, but her faith was a severe disadvantage to her progress. This was because the mantra was that all religions are equal – but that Christianity, because it made exclusive claims, was significantly less equal than the others. My young friend, since she represented this fundamentally intolerant faith, was made to realise that she would not fit in, unless (of course) she renounced orthodoxy and sumitted to the iron rule of diversity.

The general intellectual (if that is the world) ambience that has made the appeal to a certain class of emotions, over a restricted range of issues, the standard by which words are allowed to be voiced and thoughts to be thought, has been quickly adopted in the theological community. I have on my shelves a book by Andreas Köstenberger and Michael Kruger called The Heresy of Orthodoxy. In it, they critique the fashionable thesis of Walter Bauer and Bart Ehrman that Christianity was originally incredibly diverse and inclusive, until the oppressive and authoritarian party of Constantine invented orthodoxy, suppressed freedom of thought, and burned all the books so that we now have little evidence of Christianity’s once-glorious heterogeneity. You’re familiar with it, of course – think Dan Brown in the $150 academic edition.

The authors comprehensively demolish the claim, showing that there was indeed a core orthodoxy from which heresies diverged following, for the most part, only locally popular teachers with personal agendas. But the most interesting thing is not the Bauer thesis itself, but its persuasiveness for our times, when Christian organisations feel constrained to apologise for apostolic doctrine. It matches the spirit of the age. Don Carson, in a pithy endorsement on the cover, shows how a dubious academic theory about the distant past has fuelled a widespread academic sidelining of historic Christianity in the present:

In the beginning was Diversity, and the Diversity was with God, and the Diversity was God. Without Diversity nothing was made. And it came to pass that nasty old “orthodox” people narrowed down diversity and finally squeezed it out, dismissing it as heresy. But in the fullness of time (which is of course our time), Diversity rose up and smote orthodoxy hip and thigh. Now, praise be, the only heresy is orthodoxy.

Is that an unfair assessment? I don’t think so. For all the rhetoric about biblical infallibility never having been the historic understanding of the Church, the fact is that ideas about the Bible erring in matters of faith and doctrine – or being malleable to any number of private interpretations – have never been held by any historic branch of the Christian tradition. One has only to see the way that the Apostolic, Ante-Nicene and Post-Nicene Fathers handled Scripture to realise that. Or to read the arguments for any of the conclusions of the early Ecumenical Councils. Or to look at how the Bible is used by the Scholastics, the Reformers, or even the Council of Trent. Or, most tellingly, how it is used by Jesus and the Bible writers themselves.

No, diversity of doctrine as a commendable state of affairs, rather than a necessary evil, is a peculiarly post-modern, Western phenomenon, which is demonstrably as culturally conditioned as Pokemon. I am not persuaded that “diversity” is what was “once for all delivered to the saints” (Jude 3), and I shan’t therefore be contending for it. Sorry if that’s heresy.