It was my brother who pointed out to me this month’s most amusing evolution story, in the form of the discovery that the European bison (or wisent) is actually a hybrid of the extinct pleistocene steppe bison (closely related to the American plains bison) and the aurochs, the ancestor of domestic cattle.

This hybridisation had been suspected from the sequencing of both ancient and modern DNA, which found that aurochs mitochondrial DNA is present in the wisent, suggesting a hybridisation event. The confirmation of this process in the representations of European cave art, which is seen to transition from a steppe bison type to a wisent type, led some wag to coin the term “Higg’s bison”. 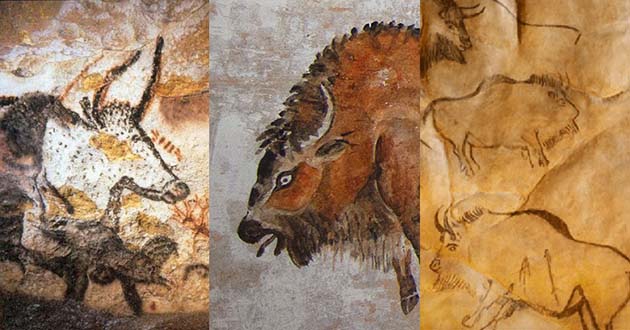 This is, incidentally, not the first time that the accuracy of palaeo-art has contributed to our biological knowledge: from it has come our knowledge of mammoth colouration in life, and the zebra-like striations on the shoulders of ice-age horses.

It’s interesting to find, once more, how much light on the sheer complexity of evolution is cast by following up any of these stories of individual spieces. For example, one page I found describes the different fighting behaviour of bison thus: 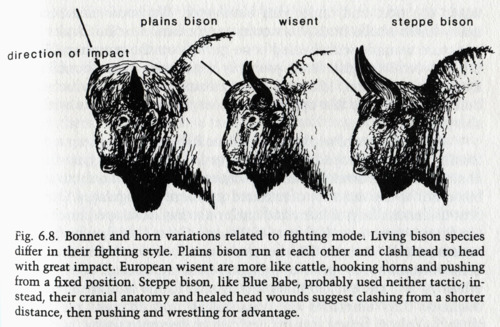 In the light of the hybrid story, perhaps the wisent’s cattle-like fighting style is not surprising, but then the mystery is why the steppe bison differs so greatly from its close American cousin. One has to suspect that anatomy, rather than selection, may drive behaviour: and perhaps cultural behaviour, in turn, moulds anatomical change. There are just too many variables for an adaptive just-so story.

But I want to concentrate most on this story as an example of hybrid speciation, which is conventionally said to be rare in higher animals, though it would seem to require more complete knowledge than we have of the genomes of lineages to be able to say that with assurance. Apparently sterile hybrids are known between nearly every member of the Bos genus, the exceptions being those with different chromosome counts (I wonder how those would arise and reproduce successfully, then?). Since the steppe bison and aurochs inhabited the same environment, crosses are not too surprising, although since even a child (or a cowboy) can easily tell that a bison is pretty different from a cow, spontaneous crosses do raise ones eyebrows a little: that animals recognise their own kind is kind of basic to sexual reproduction.

What it is that enabled one or more male-bison/female-aurochs crosses to lead to a fertile and genetically isolated hybrid population is unknown, but (reflecting my recent posts) probably also highly contingent and, within the Meaning of the Act, saltational. The “fortuitous” resulting mix of genes and phenotypic traits, however, out-competed the steppe bison despite the latter’s long selective history, and we now have only wisents in the world… it seems the hybrid even outcompeted the aurochs, in its non-domesticated form, now extinct.

Aurochs and Steppe Bison apparently evolved in roughly the same time and place, perhaps in India around 2 million years ago, so it would follow that they probably have a common ancestor some time before that, and increasing divergence after that point. But it is a bit difficult to be sure, when we know now that the genetic similarities of their living descendants – wisents and domestic cattle – are at least partly due to gene transfer from the hybridisation event.

But this confusion is actually the case across the whole genus. A 2002 paper says:

We propose that because of shared polymorphisms and reticulations, tree topologies are only partially adequate to represent the phylogeny of the Bovini.

…the pattern of previously classified bovid clades and sub-clades is not supported, suggesting that recurrent mutations and short internal branches may limit meaningful evolutionary information.

To what extent, I wonder, does this evidence actually represent recurrent speciation by multiple hybridization events? Perhaps “recurrent mutations” are distinguishable from “horizontal gene transfer”, but that would seem to depend, given the rarity of actual fossil DNA, on the robustness of the computational models being used – and these are going to be pretty difficult to calibrate from the fossil record.

Predictions from cladistics depend on the assumption that clades represent a Darwinian phylogenetic tree (for strictly speaking clades are just comparisons of traits which could have other explanations, even including Linnaeus’ assumption of special creation and the principle of plenitude). It has become the custom, it seems, to correct morphological taxonomy by genetic evidence – but in the case of the Higgs Bison and his cousins, at least, that seems a hazardous process. Genes tell many tall tales, and not all of them are true.

Possible the most eagerly studied event of recent evolution is that of Homo sapiens. And here, too, where ancestral DNA has become available we have found evidence of hybridization with at least three other hominid species. What we have not found is any evidence of the gradualist continuum of development predicted by Neodarwinism, and represented in pretty well every popular conception of human evolution since Rudolph Zallinger’s 1965 illustration:

Instead there is fossil evidence for a few (even fewer than the illustration suggests) pretty stable species, and the saltational emergence of new ones. Who is to say whether the novel mix of characters that marks human progress was not more the unpredictable result of the hybridization of separately developed traits than simple “descent with modification”?

And what about the story of our descent from a chimp common ancestor, on which hangs so much of the modern discussion of everything from animal rights, human violence and sexual morality to the historicity of Adam? Our genetic similarity to chimps is not much greater than our similarity to orang-utans, on a different continent, with which we also have much more in common behaviourally. Is it inconceivable that the waters may be muddied by unknown hybridization events? And might not such events trigger entirely new morphologies and behaviours negating ancestral comparisons?

It’s not new for me to suggest that we may know less than we think, but the more non-Darwinian mechanisms of evolution we discover, the more complicated, and corresponsingly unreliable, the predictive models used will inevitably be. And the more such models stray outside the internal wrangles of science into questions of theology and history, the more we would be wise to apply the dictum “It Ain’t Necessarily So” to more scientific matters than the things Ira Gershwin was “li’ble to read in the Bible.”

In considering speciation we have to consider, after all, the various kinds of mutation and whether they are subject to purifying selection, or adaptive selection, or neutral-fixation, or to Austin Hughes’s “plasticity-relaxation-mutation” process. We have to consider hybridization events, recurrent mutations, convergence, gene or genome duplication, epigenetic processes, spandrels, viral modification of the genome, cultural evolution, niche construction … all extra cogs, of variable and uncertain significance, to factor into the modelling. Michael Flynn, in his excellent blog series on scientific models, comments on a quote from Ted Kaczynski, who before he became the notorious Unabomber was a brilliant mathematician:

Kaczynski told his class…: “With seven variables you can model any set of data — as long as you can play with the coefficients.” There will be no “unexplained” variation left over to warrant an eighth factor. That’s why big models always seem to fit so well and have large R² values, and the modelers “don’t need” the eighth factor.

Except that if you drop one of the other seven and replace it with number eight, you can get another good fit (with different b-coefficients). Many moons ago, TOF read an article in Scientific American, the title and author of the article now escape the keen steel trap of his mind, in which an R² value was improved by adding a variable that was completely irrelevant to the model!

The bottom line, I guess, is that whether you buy the traditional but increasingly unlikely scenario that mankind arose gradually and adaptively from a chimp-like ancestry, or whether crossing a chimpanzee with an orang-utan gives you, presto-changeo, Einstein, the whole process is highly contingent, and therefore (in Christian terms) highly dependant on a creative, designing providence.

It’s not so much a “Then a miracle occurs” thing, as a miracle being each and every stage. 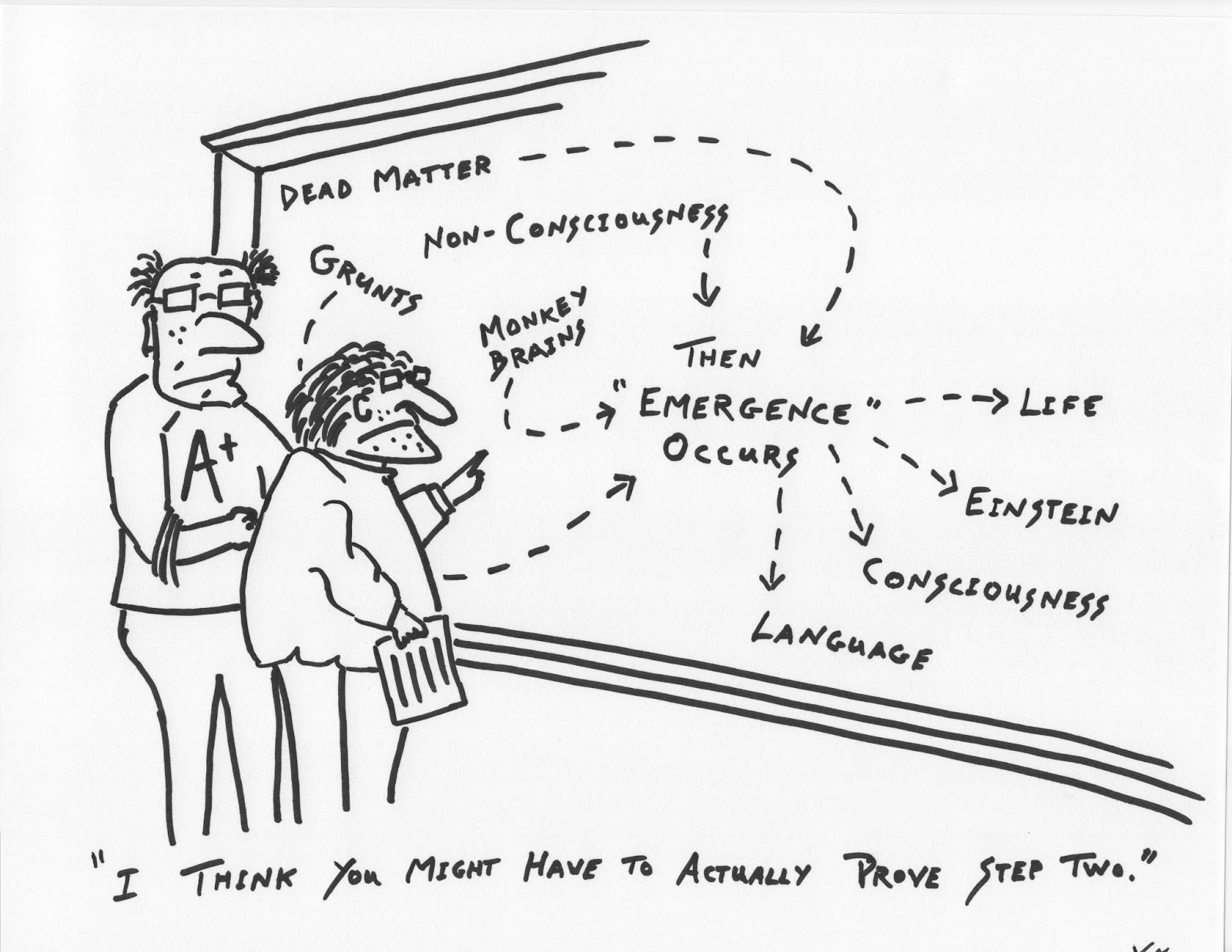