The clarity of mud

Last week’s Royal Society symposium – on whether the Evolutionary Synthesis should be extended, or whether (as some appeared to imply) all the dramatic new mechanisms found recently were successfully and silently subsumed into standard population genetics several centuries ago -had a slide that caught my attention. It caught the attention of ID people in the audience as well, which is how I came to be aware of it. It was in Andy Gardner’s talk expounding the virtues of “weak adaptationism”. 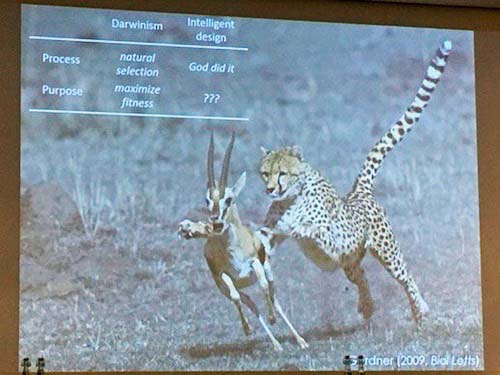 To me it illustrates neatly how blind naturalistic science still is to its metaphysical assumptions. I want to concentrate on that after a couple of observations on the talk itself, which is outlined here .

His ideas, to anyone with only a nodding acquaintance with basic Darwinian theory, appear uncontroversial: there are lots of mechanisms involved in evolution, but the thing that produces all the interesting stuff is still Darwinian natural selection, even when that concept is stretched to include kin, and communities, and apparently any level of organisation in the living world that can be said to “work”.

And yet he claims an awful lot for natural selection, given claims from elsewehere (even at BioLogos) that Neodarwinian adaptationism is, and has for decades been, completely dead in the water. Neutral evolution is what matters, whose main connection with NS is overwhelmingly through purifying, not adaptive, selection, and which is said by Austin Hughes to produce adaptation without selection via the “plasticity-relaxation-mutation” process. Clearly Gardner doesn’t understand evolution, or them others don’t, or – and of course, this is the default position – we observers don’t, and actually everything else fits into sweet agreement for those with eyes to see. I confess I’ve squinted like anything, but I still see opposing schools of thought each claiming to be the consensus, or more usually to have been the consensus for ever and a day – evolution’s ruling opinions, like its outcomes, always seem to have their origins hidden in deep time.

Even so, there are things that I venture to suggest Gardner hasn’t understood adequately, one being Intelligent Design, and more broadly theism; and another the art of clear thinking.

You’ll see that his slide, picturing that iconic example of adaptive selection, the arms race between cheetahs and Thompson’s gazelles, includes a rather gratuitous dig at ID, which had nothing to do with the conference but must be an important alternative theory if it needs refuting nevertheless. The explanatory table reads thus:

But we ought to be very clear that, in opposing “natural selection” to “God did it” in this way, he has not only dismissed Intelligent Design, and Creationism – which some might prematurely applaud – but also Evolutionary Creation in all but its most deistic form. For if God did not “do” design, then he did not “create through evolution” in any real sense but, at most, stood aside and watched as the “free process” of selection got on fine without him.

And so the slide actually makes an entirely unscientific metaphysical claim that there is no Creator God, because “natural selection” did it instead. Somehow, you’d expect more science and less metaphysics (and less unwarranted mudslinging at those not invited to speak) at the Royal Society.

But the second line of the table also strays out of science into metaphysics, this time by using the heading “Purpose” to make natural selection a teleological force. Has he (and most of his hearers) forgotten that since Bacon final causation has been excluded from science, simply because of that “???” under Intelligent Design? Bacon said that since we can’t presume to know why God would want to do particular things in nature, we must restrict science to efficient causes.

And that means that natural selection must not be said to have the “purpose” of maximizing fitness, without explaining not only how it formed that purpose and foresaw its goals, but how we know any more about it than we do about God’s purposes. In truth, it would make pretty good sense to say that in any common view of God he “did” evolution the way he did in order to “maximize fitness”. That would be at least as accurate as to attribute such a purpose to natural selection, only without the metaphysical error of attributing purpose to a type of event.

Now, to be fair, the presentation notes suggest, by sleight of hand, that Gardner is using a metaphor in this slide, albeit without acknowledging it:

The usefulness of weak adaptationism is that it permits biologists to describe organisms and their traits in purposeful, functional, intentional terms. Such language is not necessary, but it is extremely useful. Not only does it provide biologists with a powerful shorthand—which can be translated with fidelity into the mathematics of gene-frequency change—but it also defines whole (and successful) programmes of research. For example, on the evolution of altruism.

Hmm. I’ve pointed out before how “such language” is actually impossible to bypass, because the impression of design is overwhelming, which is precisely why he so easily slips into “purpose” language in the slide. This is shown by the fact that he was actually called out on it in Q&A. As Paul Nelson at Evolution News and Views reports:

Then the Q&A arrived. Professor Tim Ingold of the University of Aberdeen, sitting to my left, was visibly agitated. Are you saying, he asked Gardner, that organisms are actually designed objects? Yes, replied Gardner. Well then, continued Ingold, if organisms are actually designed, then that would require a designer. Can you please say, he asked vehemently, how your explanation is any different from Paley’s?

It isn’t, actually, any different from Paley’s argument, which Gardner had criticized. Ingold has studied some logic, it seems. So it wasn’t, in fact, intended as a metaphor at all: this presentation confirmed all the old suspicions that biologists repeatedly get away with claiming, within scientific contexts, that natural selection is a teleological force that replaces the need for God. The paper claims, in effect, that natural selection, because it always maximizes adaptation (even though mostly, in reality, it maintains stasis), can be described as having that as its purpose. It’s like saying, I suppose, that heavy things have an inner “want” to seek the centre of the earth – but Aristotle was drummed out of modern science for speaking like that.

Joshua Swamidass would correctly say that Gardner, by claiming NS as a true designer, was not doing science, but philosophical speculation based on science. Just as was Eva Jablonka when, at the same conference, she commented, “Not God – we are excluding God.” A lot of dodgy metaphysics is going on in the name of science at the RS, wouldn’t you say? In case you think she had a good point in keeping God out of science, it is illegitimate to say that discovering any process excludes God, since it may be his process, which is what Evolutionary Creationists are entitled to claim from within science. Should TEs not get as annoyed by science’s bad metaphysics as they seem to be by ID’s bad science?

But I leave the best till last. Gardner’s presentation summary makes great play on the consonance of his views on natural selection both with observation and the maths of population genetics. I just wonder, then, why he uses the cheetah-gazelle arms race in his slide, when on the cheetah’s side at least, the story is one of near-zero adaptation over at least the last 100,000 years, as I discussed here.

Ah, I see – it’s yet another metaphor.

8 Responses to The clarity of mud