Before it got diverted on to US party-politics, Joshua Swamidass’s thread on BioLogos  looked for common ground between the four common Christian origins positions (YEC, OEC, ID and EC). This was in the light of bridgebuilding discussions he has set up between representatives of all but ID (so far – given that many IDists are also believers in evolution, this ought not to an irremediable omission).

I tried to set the ball rolling with some suggestions:

And on the down side –

The conclusion most of these lead to is the fact that microevolution is not really theologically controversial (the main arguments about that are within science itself). The disagreement is over whether, and how, speciation and innovation has occurred – and as some observers of the recent Royal Society conference pointed out, this is also where the science is also most sketchy. The tendency still is, a century on from population genetics, simply to describe a microevolutionary process and pronounce, “Scale it up and you’ve explained everything!” But “the arrival of the fittest” is still as much an active conundrum as when Hugo de Vries coined the phrase in 1904. 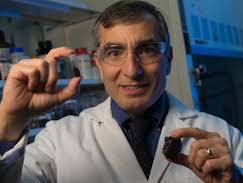 One of Joshua’s “candidates”, who cannot accept the consensus assurances that there is no problem, is the noted chemist and nano-technologist James Tour, who is said to embrace “progressive creation”. Tour’s website has an apologetics page which is well-worth perusing. It’s clear that his views on origins are faith-based but informed by science and also, most importantly, tentative. In other words, like us here at The Hump, he believes in the theistic God of the Bible, but accepts an old earth and doesn’t preclude any particular model of creation in principle. He pleads insufficient knowledge of both theology and evolution to pontificate – but also (as has been well-publicized) he doubts that any scientist truly understands enough about macroevolution to pontificate convincingly.

In particular he doubts the ability of the accepted undirected Neodarwinian mechanisms to produce the richness we see in the biosphere, and on that he is prepared to cite his own professional experience:

For several decades I have been building molecular cars with functional motors, wheels, axles and chassis, and molecular nanosubmarines with light-activated motors and fluorescent pontoons, where many parts have to work in unison, and be planned to work in unison during redesign of major features. Even small changes in desired function can send the synthesis all the way back to step 1. In biology, the mechanisms for such transformations are complete mysteries. I posit that the gross chemical changes needed for macroevolution (origin of the major organismal groups, i.e., of the body plans,) are not understood and presently we cannot even suggest the mechanisms, let alone observe them. Any massive functional change of a body part would require multiple concerted lines of variations. Sure, one can suggest multiple small changes ad infinitum, but the concerted requirement of multiple changes all in the same place and at the same time, is impossible to chemically fathom. One day the requisite chemical basis might become apparent so that the questions can be answered. But present-day biology is far from providing even a chemical proposal for body plan changes, let alone a data-substantiated chemical mechanism.

Now if this leads him to a view called “progressive creation”, as Joshua Swamidass’s résumé states, what does this entail? Firstly some degree of agnosticism about “process”, apparently, but there is little in his “apology” that would exclude the transformation of species in itself, or commit him to believing that God simply creates new forms ex nihilo from time to time. In fact, consider his affirmation of Adam and Eve as historical figures, albeit within (as he confesses) a flexible physical context:

Based upon my faith in the biblical text, I do believe (yes, faith and belief go beyond scientific evidence for this scientist) that God created the heavens and the earth and all that dwell therein, including a man named Adam and a woman named Eve. As for many of the details and the time-spans, I personally become less clear.

A literal understanding of Genesis would have Adam formed from dust, and Eve partly transformed from the cellular material of Adam. This would be the transformation of one form to another, by God’s creative act on existing matter. So that when Tour goes on, regarding the creation of the species:

So, in addition to my chemically based scientific resistance to a macroevolutionary proposal, I am also theologically reticent to embrace it. As a lover of the biblical text, I cannot allegorize the Book of Genesis that far, lest, as Tevye in Fiddler on Roof said, “If I try and bend that far, I’ll break!” God seems to have set nature as a clue, not a solution, to keep us yearning for him,

it seems that his sticking point is not “creation from nothing”, and certainly not “six-day creation”, but simply the active, creative input of the theistic God of Christianity, and that accords with both his faith and his experience as a nano-chemist.

How does that not agree with Evolutionary Creation? I would answer that it is against some forms of it, in that it cuts right across the deistic or semideistic “free process” theology that has been something of the default position for theistic evolution in the BioLogos era. This has God setting up the laws governing evolution back at the Big Bang and simply letting it run, its ability to fulfil his creative wishes being dependent on how deterministically one sees nature, and how deterministically one sees his will, ie that perhaps he doesn’t care much what emerges, as long as something does.

But theologically, as we have frequently pointed out here, such a view has its roots more in Deism and Socinianism than in the historical Christian God who providentially governs his world. And so we reject it, although continuing to believe that evolution has occurred over time. In other words we fly the flag for theistic evolution, denying that deism can be properly so described.

Since that view is also intrinsically Epicurean – God setting up, or allowing, ontological randomness to stumble upon innovations on which natural selection can act – we have sometimes expressed doubt about it as a scientific proposition too. Aristotle objected to Epicurus because chance cannot produce order, Gray echoed this at the outset of Darwinism, and James Tour believes the same from his long experience of monkeying with actual functional molecules. I would also add that it is misleading to call it evolutionary creation either when you actually mean evolutionary indeterminism.

But at the same time on The Hump we’ve been exploring the true nature of randomness in a theistic view of nature, for example here. And one conclusion is that any contingent evolutionary event, that is one that does not reduce to explanation by law, or to a lawlike probability distribution, is formally indistinguishable as either an ontologically random event or a providential act of God. That would be equally true for a point mutation under Darwinian gradualism, or for some saltational event such as a hybridization.

Only, having already discounted the theological propriety of ontological randomness within Christian theism, one really only has left the category of “providential act of God”. Divine action, then, is hiding in plain sight in every such contingent event in nature. And that, surely, when it means innovation, is just another way of saying “creation”.

Now, one might conclude (in agreement with gradualistic theories of evolution) that such providential changes accumulate more or less infinitesimally before some mechanism triggers a speciation, or some new organ can be said to have appeared. Such would be the case with the accumulation of adaptive point mutations, and would also be the case in those situations where non-functional DNA sequences become ORFan genes. That would be creation, and it would be progressive.

Or one might conclude that things happen more suddenly and saltationally – as the fossil record overwhelmingly indicates. In that case innovation would be more dramatic, but one would see the change in the suites of species replacing each other over time. That, too, would be creation, and it would be progressive.

Can anybody tell me, then, why Tour’s evolutionary creation and our theistic evolution are not essentially the same position?