The world before the world

Preston Garrison recently sent me (courtesy of Ted Davis) an interesting review (limited access – sorry) for a forthcoming academic tome on Babylonian science, knowing I’d be interested both because of my musings on what science is, and what it isn’t, and also because it has implications for interpreting the early chapters of Genesis. I’m tempted to buy it when it comes out, despite the price and having to learn cuneiform(!), but meanwhile some thoughts. 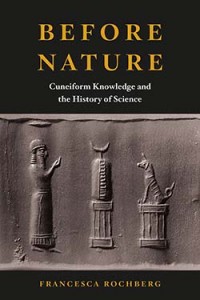 The author, Francesca Rochberg, is an assyriologist and science historian (with an interest in the science-religion interface and in philosophy – how relevant is all that to origins studies!) And she writes novels too. The first thing that struck me in the review is her contention that the Babylonians did good “science” (obviously that word needs unpacking) without any concept whatsoever of “nature” as an overall entity – a concept that came only from later Greek culture:

Rochberg argues that the cuneiform world’s preoccupation with divination, ritual, and incantation was motivated by a determination to establish “norms and anomalies within meaningful categories” and that this goal is inherently scientific. In a chapter entitled, “The Babylonians and the Rational,” she also argues that “magic” should not be used as a tool for separating science from nonscience because, in the cuneiform world, magic belonged neither to the natural nor to the supernatural. Three subsequent chapters develop these theses.

I’ve pointed out before that even early modern science saw magic as part of science, rather than of supernature. But the really provocative thing is that by comparing such an ancient scientific culture with ours she can show how much our science, far from being an objective discovery of “what is out there”, is in fact a culture-bound pursuit. Even the central concept of “nature” as a system to be investigated is a human imposition on the world:

Before Nature’s formidable erudition will fascinate cuneiformists while daunting nonspecialists and disturbing scientists, who will likely recoil from regarding divination as part of science. For noncuneiformists, the book’s most compelling parts will be its discussions of western civilization’s philosophical attempts to define nature, postdating the cuneiform world—from Aristotle to Einstein and his successors. “Real and independent as we may think nature and its orderliness are, the very notion of physical phenomena being subject to laws is a profoundly cultural claim, one that imparts a human value to the world external to human society,” argues Rochberg.

This of course does not make modern science “wrong” or “useless” – but it does make it profoundly human, just as Babylonian science was, but in a vastly different form. And that obliges us to view its assumptions and limitations more critically.

However, putting that “Philosophy of Science” issue to one side, I was drawn particularly to one statement in the review in particular:

The Babylonians’ understanding of the heavens—including astronomical predictions—did not derive from any physical framework. They employed no classification of the Moon and planets as natural phenomena and conceived no physical laws of nature governing those bodies’ cyclical appearances. Neither had they any concept of a geometrical geocentric cosmos. 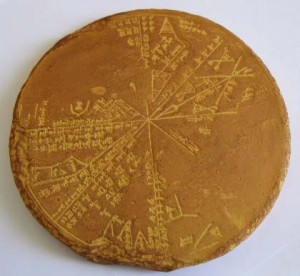 This is relevant because our biblical creation story, and the subsequent early chapters of Genesis, have close links to the Babylonian mindset, and on any dating must arise from an ANE worldview predating the Greek concept of “cosmos”. However, note that any NT and Patristic commentary on Genesis, by contrast, comes from a world thoroughly familiar with “the world” or even “the universe” in the sense of “global totality”, that we share, albeit they had a geocentric system.

One interesting example I found of this is that the Greek Septuagint Bible, from the Hellenistic era, translates “earth” (eretz) in Genesis 1 correctly and consistently as ge (arable ground) except in 2.1, the summary of creation, where it uses “cosmos“, though the Hebrew is, as always, eretz. The change makes theological sense in a culture that sees God as the creator of “planet earth” rather than only “functional land”, but we need to understand that the writer of Genesis could have had no such clearly global conception. He was thinking more about how all functional elements of the “temple of creation” – ground, sea, sky, light, food, livestock or man – were completed, rather than writing of a completed universe.

We therefore need some careful thought in how we understand Genesis (a) in its original setting, (b) in its New Testament understanding and (c) in relation to modern scientific and theological concepts. That seems a mountainous task, except that if we accept the divine inspiration of the text, such translation between worldviews must be possible. I’ll mention some implications in a bit.

But first, in the absence of access to Rochberg’s book, here’s what seems a similar case made more fully by a Catholic philosopher, Remi Brague, of which this long quote speaks:

For Brague, the primary foundations of cosmology, as well as its limits, lie within the origin of the word ‘cosmos’ in the ancient Greek civilisation. As a result, a distinction and separation is made between the moment where a word to mean “the world” – cosmos – came into being and the previous conditions set by pre-Greek civilisations… Brague shows evidence that leads to the conclusion that early civilisations, as the Mesopotamian and Egyptian, did not have a word such as world in order to designate the entirety of all things that constitutes a world. Previous to the Greek civilisation, on a first stage, there existed enumeration – the listing of elements that made the whole – after the utterance of the whole – the usage of words that meant entirety and wholeness, expressing therefore the idea of a totality (Brague, 2003; Rochberg, 2007). According to Brague, this meant that these civilisations had not yet grasped things in themselves in order to create a structure that makes of all things a unity. Phenomena were observed, understood, explained and integrated in an overall system without, however, Man looking to understand them as a unity from a single perspective; what Emma Brunner-Traut designated as ‘aspective’ (Brunner-Traut cited in Brague, 2003, p. 13)…  because in pre-Greek civilisations Man existed in communion with the world, such an independent structure could not be conceptualised and named. Consequently, without a word for world there could not exist an explicit and intentional reflection upon it. As such, following Brague’s argument, it is not feasible to discuss cosmology prior to the existence of the word cosmos, which in the Western world only came into being with the ancient Greek civilisation.

What that means is that to speak of “Babylonian cosmology” or the “cosmology of Genesis” in the sense of “ancient science” is anachronistic. The idea that either culture conceived of a flat world with a goldfish-bowl-like raqia (hard firmament) above the air keeping out an infinite ocean must be wrong, not because any individual element is necessarily mistaken, but because the whole idea of the “world” as a physical whole did not exist (incidentally, neither did the the idea of “infinity” or the idea of “air” as a material thing (see here). 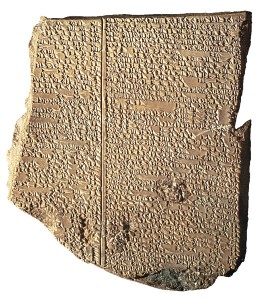 Likewise, the argument over whether Genesis conceives a worldwide or local flood is quickly resolved – one cannot think about a worldwide flood when one has no concept of “world”. There are implications for how Genesis would have understood “mankind”, even (or maybe especially) assuming the early chapters conceive of people outside the Adamic line like Cain’s wife. What does the universality of sin mean in a time before such universals became thinkable?

Such a lack of a “cosmic” concept helps account for the parochial nature of the Babylonian  “first world map”, which I discussed here. We are wont to assume the ancients were ignorant of the world beyond their experience: rather, such a world beyond is ignored on principle in favour of what is relevant to experience. I tried to argue that with reference to Genesis 1 here. The text works perfectly well without any concept of “cosmos”, “nature” or “world”- which is just as well, if such ideas didn’t exist back then.

Because it’s so hard for us moderns not to exclaim, “Oh, they must have had some picture of what the whole shebang was really like”, I’ve been trying to think of examples of things we are happy to regard without any idea of a “totality”.

One area might be music. To us, there is a world of music we know, whose boundaries are extended in a trivial way by the latest single, or in more dramatic ways by avant garde experimenters. We’ll hear music of other cultures or times with a mixture of familiarity and strangeness. We’ll maybe in a curmudgeonly partisan way doubt that hip-hop or blue-grass or Ligeti is music at all. But we’ll never consider that there is, in any real way, a bounded “universe” of music of which we could, perhaps, explore the boundary without following a path from where we are. Occasionally, people will excuse plagiarism on the grounds that there are only so many combinations possible of our 12 notes – but scientists don’t seriously calculate the total number of tunes or rhythms there may be, as they do the number of elementary particles or Planck times in the universe.

Yet it’s quite possible to conceive of an alien culture that did that exercise as serious science with regard to music – and when they contacted us and asked exactly which part of the music-universe we occupied, we’d answer that we’d never thought to wonder. 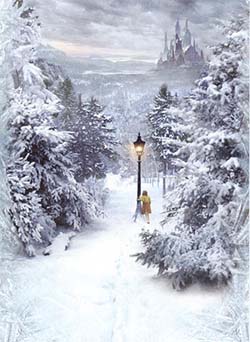 A second example might be easier to relate to the ANE worldview. Did you ever stop to wonder, when reading the stories to your kids, about the cosmology of Narnia? I’ll bet the answer is “No”. And yet there’s every reason to think it’s nothing like ours. It’s in some other parallel dimension, apparently – you reach it through the back of a wardrobe, for goodness’ sake. We’re aware it has landscape and territories which can be ruled by good or evil folk. It has seas to be navigated and mountains to climb. But how big is it? Being a magic place, why should it even be a sphere, like our world? After all, stars like Ramandu go there to retire, rather than become red giants or supernovae as they would here.

But I’ll wager we’ve all been quite content to concentrate on what matters in the stories: the experience of the characters, the struggle between good and evil, and the salvation of Aslan. It’s not that we assumed Narnia would be more or less the same kind of thing, in the same kind of galaxy, as earth is. We just didn’t assume anything, nor recriminate  C S Lewis for failing to deal with the issue.

I suggest that’s the kind of mindset (with a whole bunch of other big differences regarding the nature of nature) shared both by our Babylonian scientific ancestors and our ancient Israelite spiritual forbears.

The difference is that understanding Babylonian science is, for the most part, an academic exercise. Whereas the unfamiliar worldview of Genesis needs to be understood better if we are to understand the foundations of our faith in creation, election and sin. Their world changed into our world – and all the time it was the same world to God.

11 Responses to The world before the world