Deistic and semi-deistic accounts of God’s creation of the natural world still appear to have much appeal for “sciency” types nowadays, and especially for Evolutionary Creationists. Even in “moderate” minds, which judge God capable of determining, or at least foreseeing, the outcomes of evolution in particular and world events in general, there appears the need to retain an unbroken lawlike chain of material causes. In other words, science must be able to give a more or less complete account of God’s works, at least in the “natural creation”. For God to “interfere” with that chain must be considered at best rare, but in reality a rather distasteful concept altogether.

Much of such opposition to God’s “changing” the expected course of events goes back to the argument of the Deist Leibniz against Isaac Newton, which I’ve mentioned a few times at The Hump. Leibniz wrote:

Sir Isaac Newton and his followers have also a very odd opinion concerning the work of God. According to their doctrine, God Almighty wants to wind up his watch from time to time: otherwise it would cease to move. He had not, it seems, sufficient foresight to make it a perpetual motion…

And as those men, who pretend that in an earthly government things may go on perfectly well without the king himself ordering or disposing of any thing, may reasonably be suspected that they would like very well to set the king aside: so, whosoever contends, that the beings of the world can go on without the continual direction of God… his doctrine does in effect tend to exclude God out of the world. 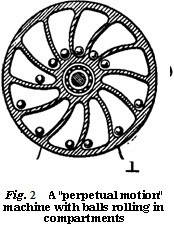 Clarke voices well the principle objection – the Christian revelation is of a God who desires to interact with his Creation. But I want to look today at the reasons why anyone might wish to make a perpetual motion machine, in Leibniz’s sense of a system operating without external adjustment (or “decision nodes” in computer speak). We could maybe start with his own example of a self-winding watch, which didn’t exist in his time but is commonplace now. Indeed, the first dubious claim of a self-winding watch was by Joseph Tlustos in 1773, and the myth of perpetual motion was intrinsic to his description.

The reason such watches were developed was to prevent people losing their time through forgetting to wind their watch, or to save them the labour of so doing, or to prevent them causing damage by overwinding the spring. One might add that commercially the gimmick of achieving such a technical feat must have made people buy them just to impress others (I remember my father showing this feature off to friends on his first decent watch back in 1961 – this motive is still at the heart of R&D from smartphones to car styling). But it takes very little thought to realise that none of these apply to God as Creator. Let’s take a closer look.

…I have gradually learnt to see that it is just as noble a conception of Deity, to believe that he created primal forms capable of self development into all forms needful pro tempore and pro loco, as to believe that He required a fresh act of intervention to supply the lacunas which He Himself had made. I question whether the former be not the loftier thought. 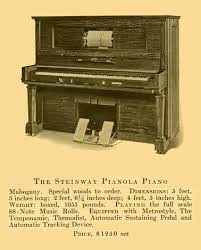 The relative loftiness of automation as opposed to involvement is, as Clarke suggested to Leibniz, something of an illusion, because it depends upon what God intended when he made the world. If, to use an analogy that I’ve used before, he intended the cosmos as a Steinway concert grand on which to perform, rather than as an automatic pianola, then most people would prefer a live performance by Sergei Rachmaninov, Scott Joplin or Fats Waller than to stick a piano-roll in a machine, once the novelty of the latter wore off. 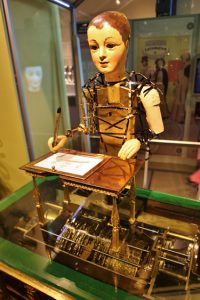 Some of the most impressive “perpetual motion machines” closer to the time of Leibniz were the automata (about which I wrote here) which impressed, and still impress, observers by their ability to mimic a real person. Though there was a serious philosophical point behind them, ie to demonstrate that people are themselves only mechanical machines, the wonder of being able to do God’s acts after him, as a mere clockmaker, must have been very much part of the challenge.

The same is true, surely, of AI research today. Making robots may perhaps tell us more about how we ourselves work, and talk about saving people from menial tasks, or more realistically corporations from expensive labour, is much to the fore. But if drawing your wife so it actually looks like her is satisfying, how much more heady must be the experience of making a machine that is like a person?

But God isn’t imitating nature: he makes real people. And he has no need whatsoever to prove his mechanical ability by making a self-winding watch or some more sophisticated automaton like self-regulating universe. One might argue that it will increase his glory, but for every scientist impressed with a universe that runs on its own, there are thousands of souls prostrated before the throne of God because he gave his Son to the world to live as an ordinary man and involve himself with us to the point of death on our behalf.

I might add another reason for automation, and that is the enforced absence of the operator. In Robert Heinlein’s Foundation science fiction trilogy, the “psychohistorian” Hari Seldon leaves automated holograms behind after his death, to keep his followers in touch with what to expect from the next stage of his infallible predictions about galactic history (until an unforeseen mutant inconveniently messes up the course of history). Had Seldon been immortal, he could have delivered his addresses in person, and even recalculated in the light of the mutant Mule.

But God is immortal, and omnipresent, and so that reason for a “perpetual motion” universe also falls to the ground. To certain modern scholastics, perhaps God is intrisically incapable of being a cause within the Universe lest he lose his unique essence, as I discussed here, and this seems to make them favour a scientifically closed world of nature – though as I point out in that piece, even if that were true it wouldn’t follow that God would have to create such a closed universe rather than one where wonders abound every day, or where cause and effect don’t even operate at all.

The reason he has not done so, and has created reality at least partly tractable to science is his faithfulness, in the form of his gracious provision of nature in the sense I have recently sought to define it, that is as regularity and repeatability. This not only makes science possible, but underpins all life, because it is what makes learning – of even basic truths, like the potability of water – possible.

But just as in human interactions, we rely on consistency as a background against which novel behaviours and communications occur, so in the world as a whole it is the mixture of order and contingency that gives existence its richness. The perpetual motion machine does not answer the needs of man or the purpose of God – which is as much as to say that you can’t have a real relationship with an automaton.

5 Responses to Why robot?