Where are all the pagans in Genesis?

Continuing my attempts to place the early chapters of Genesis within some historical context, I noticed for the first time this week that Genesis doesn’t mention any foreign gods at all in its fifty chapters. That seems remarkable to me, for I’ve never heard mention of it before, though it must undoubtedly have been noticed by someone over the last three thousand years. I look to the scholars to explain it.

But considering the book spans time from “the beginning” to, perhaps, 1600BC, and involves characters who are active in Mesopotamia, Canaan and Egypt, and that it mentions tribal origins over all the then-known world, you’d expect the gods of the nations at least to receive a mention or two, and they don’t.

There are a couple of possible exceptions, according to a survey I’ve just done. One is Jacob’s telling his people to put away their “foreign gods” before going up to Yahweh at Bethel – but the word is the untypical nekar, “foreigner”, and I suppose it might even be an indication only to take the bloodline, not foreign employees. if not, Jacob seems very easygoing about syncretism in his family group.

Another mention is Rachel’s purloining of Laban’s teraphim, often translated “household gods”, but Laban actually gets a prophetic word in a dream from Yahweh before setting off in pursuit, and the issue seems more about the theft than any devotion to other deities. In fact, teraphim (meaning “healers”) occur with a mixture of acceptance and criticism throughout Scripture even into post-exilic times. For example, King David has some, which are used to save his life, though his devotion to Yahweh is never in doubt even in that passage. At other times they are linked with idolatry. There are scholars who argue that the Mesopotamian equivalent (often very much like those prehistoric “Venus” figurines one sees) may be simply health charms or reminders of revered ancestors, so teraphim may not be “gods” as such at all.

The only other thing I could find was that Joseph’s Egyptian wife was the daughter of a “priest of On”, but for all the insight into his religion that gives he might as well have been Russian Orthodox. Oh yes, and I should mention that there are some names with roots derived from pagan deities, such as “Abimelech”. But as for the gods themselves, they’re not named – even as something generic like “the gods” – nor are they apparently consulted by anyone. In fact, there is a pattern in Genesis of foreigners responding positively to words or judgements from the patriarchs’ God.

As I hinted, I have absolutely no explanation for this, for the false gods of Egypt and the nations are prominent in Exodus and the rest of the OT. But my reason for mentioning it is that the absence of the gods makes the absence of people, other than Adam and his offspring, in Gen. 2-11, less unique and surprising than it might otherwise seem. As some scholars have suggested, the narrative is exclusively focused on the line of Adam for one good reason – that he is regarded as the forbear (and forerunner) of Israel, for whom Genesis was written. 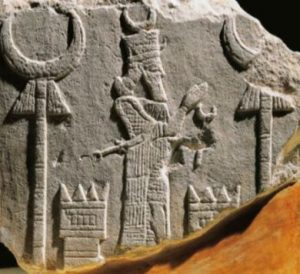 We know that many deities were worshipped in the Mesopotamia of Abraham and his ancestors, in the various regions of the Levant in which his family wandered, and of course in Egypt where they ended up for 400 years. And likewise, in the period of history after the Flood, and probably before if it is the same Flood as that of the cuneiform texts, we know there were whole nations of people worshipping them, rather than Yahweh (who is unknown, it seems, from that period from outside sources). Yet Genesis 2-11 deals only with those who worship Yahweh. The most likely reason, then, is not that only these people existed in the world, but that the writer was as uninterested in the others for his literary purpose as he was in their pantheons.

So while I’m here, let me recount a few hints in the text that the writer of Genesis was fully aware that other humans existed.

To all this, of course we must add the extra-biblical testimony of both history and archaeology about a world already well-populated in the historical times fairly clearly indicated in Genesis. Yesterday I sought out a neolithic long barrow not far from us, dated to around 6,000 years ago. Its builders, it’s thought, may have originally been immigrants from, ultimately, the middle east, but we only suspect that because Britain has older mesolithic settlements going back to the end of the ice age, and even 40,000 years earlier Europe has a rich cultural heritage in haven-areas free of ice. I’ve visited their caves and seen their artifacts in France.

It may be plausible to argue that Genesis represents some mythic representation of the whole of mankind, but it’s not plausible to take the geographical and historical clues in Genesis and then say that the Cro-Magnon or Aurignacian cultures post-date a Flood in the last few millennia, a countable number of generations after Adam and before Abraham.

Such problems all disappear entirely if we take it that Genesis specifically mentions only Adam’s line because only Adam’s line tells the story of Yahweh’s dealings with the ancestors of Israel. Israel was being told that it was already part of the story of the true God’s dealings with mankind, as well as being warned that just as Adam had failed and brought much grief on the world, so might they fail to be faithful and secure God’s blessing. Not for nothing does so much in the account of the Fall mirror the story of the Exodus, and the Exile – this does not mean that the former was simply invented to illustrate the latter, but it is archetypal.

The big question then becomes how God carried on the story of his first representative, Adam, so that it became relevant not only to the nation of Israel, but to every human being under heaven. That’s for another time, but it’s not intrinsically more difficult a question than how the promised King of the Jews, Jesus Christ (son of Abraham, son of David and son of Adam) should become king of the whole cosmos.

5 Responses to Where are all the pagans in Genesis?