The Intelligent Design biochemist Michael Behe not long ago critiqued laboratory evidence for evolution, based on instances of loss of function, as “devolution”, and as a result brought the disdain of many Evolutionary Creationists down on himself because, you see, “there is no such thing as devolution in science.” One poster at BioLogos escalated that by saying that nearly all ID scientists believe (equally stupidly) in devolution. We’ll pass by that entirely baseless hyperbole as typical of the man, but Behe did use the word, so let’s think about it.

Some years ago I asked my luthier friend Alvin if he could make me a cheap electric 12-string guitar that sounded like a Rickenbacker. Unknown to me, although he was committed to building acoustic guitars, he’d worked for the British importers of Rickenbacker guitars, and in fact set up every one that came into the country. In the process he’d developed an ambition to build an “improved” (in his eyes, of course) version of the US classic. So I got a top job, and it was still relatively cheap.

It’s not widely realised that many iconic commercially produced musical instruments of all kinds are as much the result of the Marketing Departments as R&D. Sales of your models are flagging, so Marketing asks R&D to redesign (perhaps) the pickups – but importantly to make sure they look different so they can be puffed in the catalogue as extra-sensitive, extra-hot, or anything that will persuade people to try them and believe they hear a difference.

Of the main US guitar manufacturers, Rickenbacker may have been the most inventive and non-traditional over the years – a bit like the Citroëns of the musical world. But for every fantastic development – and the 12-string electric was one they got spectacularly right – they’ve also got stuck with plain silly trademark ideas that one has to suspect were often thought up by the salesmen rather than the luthiers. Alvin’s main “improvements” would consist of losing those ideas. 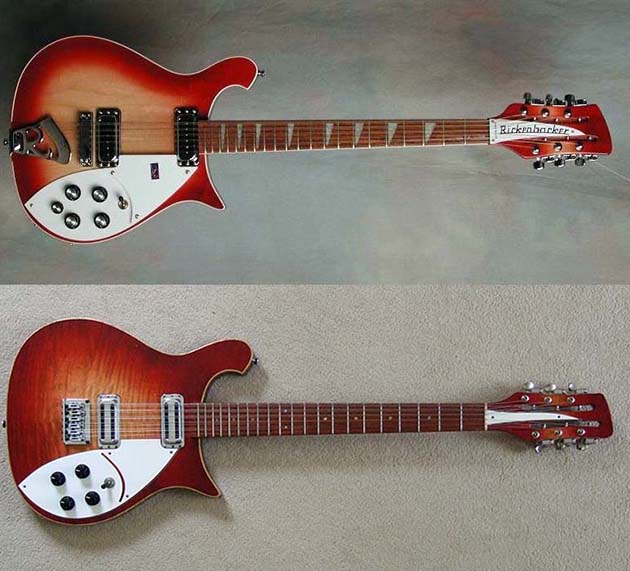 The top picture above is a genuine “Ricky” 620-12, as played by Tom Petty, and the lower one my custom-built version. Working down from the thin end, Rickenbacker are celebrated for the neat way they got 12 tuners into the same space as 6, by setting pairs of tuners at right angles, half of them in slots like a classical guitar. But the designer thought slots looked untidy, and so didn’t cut them all the way through. It looks good – but makes string replacement a nightmare, so at my request Alvin went back to full-thickness slots. 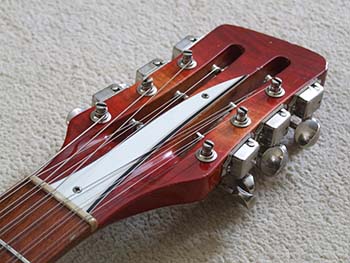 Electric guitars have thin wooden necks, which are reinforced with an adjustable metal “truss-rod”. Rickenbacker, to be different, put two truss rods in their instruments, ostensibly to counteract warping. Alvin said they only needed two rods because you have to remove so much wood to put them in – so we used only one.

The trademark triangular markers on the frets looked ostentatious to me, so we used more conventional dots.

The plastic scratchplate on a Ricky is on two levels at one end for ease of playing the high-set neck. Alvin just set the neck lower, like a Fender, and we dispensed with the need for such dust-collecting complications. 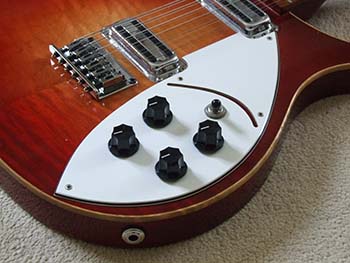 enbacker also provide a fifth knob to mix the signals from the two pickups, but every other manufacturer does fine without one so we left it out.

Again, real Rickys have their pickups wired in stereo (though of course it became “Ric-O-Sound” in the catalogue), but I had a stereo guitar once and it was a waste of time, and positively troublesome if you stuck the lead in the wrong socket, so we went back to mono. And so on – a solid Gotoh bridge instead of the attractive but comparatively flimsy original bridge and “R” tailpiece; factory-reject pickups rewound with fewer coils to match the jangly 1964 spec, scraped maple edging in lieu of binding, and a few other bits and pieces.

Now rightly or wrongly we both thought these changes were improvements. Certainly in terms of evolutionary theory the original 620-12 had evolved and was better adapted to its environment, ie me as the customer. And it’s true to say that as far as Darwinian evolution goes, any change that increases survival is evolution.

Back in the nineteenth century, however, many people, including biologists, thought of evolution as being about inevitable progress towards the best, the most beautiful and the most complex. Examples that went against that “onwards and upwards” philosophy, like the loss of digestive organs by internal parasites, or of eyes by cave fish, were sometimes called “devolution”. And because biologists don’t think of adaptation that way any more, all the Wikipedia and popular science sites say that such devolution is not a scientific concept, since it implies a global teleology that doesn’t exist in nature.

It’s from these kind of articles that scorn for Michael Behe’s use of “devolution” comes. If there is no devolution in science, then Michael Behe can’t be a scientist because he used the word! Now sometimes I despair at the superficiality of discussions like this, with “intellectual” folks insisting that words always have a fixed meaning which is either “good” or “bad”. Use the right buzz-word and you’re identified as one of the gang – use the wrong one and your villainy is exposed. In some cases even the use (or not) of a capital letter seals your fate.

I don’t know whether Behe was aware of the history of “devolution” when he used the word, or even if he meant it as a serious label or a mild witticism. But the fact is that he clearly used it in a fundamentally different way from the Spencerian optimists who didn’t understand that adaptation is all that matters to affirm evolution. He has built his ID case, from Darwin’s Black Box onwards, on the question of whether the currently accepted processes of evolution can produce the type and degree of complexity actually seen in life – bacterial flagellae and all that jazz. It’s an entirely different matter from whether evolution must always go “forwards” – his doubts are about whether it ever can, to the extent that it has, by the ateleological means proposed by random variation and natural selection.

My 12-string suits me fine (it is “well-adapted”), but it took rather little inventiveness to change the things we did – we just missed out some clever ideas we didn’t like, which presumably a lot of other people do like, and which took a fair bit of imagination and skill for Rickenbacker & Co (and especially the 620’s original designer Roger Rossmeisl), to think of and implement in the first place. In fact, the things we didn’t change were original ideas we thought so brilliant that Alvin built a pseudo-Rick rather than some other type. It’s a whole lot easier to lose a truss rod, a knob and a few turns of coil-wire than to design what was (when it first came out) a rather revolutionary instrument.

Mechanics don’t get design plaudits for taking out-air conditioning, even if it makes the car go faster and use less fuel. Plain doorframes are more cheap and functional than those in old country houses with rococo decoration – but you have to admit the latter take a whole lot more skill to make.

Now that seems entirely obvious to me, just as it seems plain that for a bacterium to gain antibiotic resistance by breaking one of its metabolic pathways requires a different order of explanation from the construction of the pathway in the first place. Isn’t it intuitively obvious that for cave fish to lose their eyes to save their metabolic cost is easier to explain than the development of the eyes in the first place?

Nobody (least of all Michael Behe, I suspect) is particularly shocked that both gain of function and loss of function can be adaptive, and so qualify as “evolution” (at least to adaptationists, though we’re told they lost their debate with neutralists decades ago!). The important thing, though, is “How is it done?”, and I can’t comprehend how guys with a scientific education can fail to notice that showing that losing things may be beneficial fails to demonstrate how things get gained. Looking at that problem, “devolution” seems to be a reasonably useful distinguishing term.

You have to suspect that the word “design” just makes some people see red, so they become blind to the obvious nuances of words.

Anyway, even if devolution doesn’t exist in science, it certainly exists in recent popular culture:

Training in medicine (which was my career), social psychology and theology. Interests in most things, but especially the science-faith interface. The rest of my time, though, is spent writing, playing and recording music.
View all posts by Jon Garvey →
This entry was posted in Music, Politics and sociology, Science. Bookmark the permalink.