I’ve been having a long, but mainly cordial, discussion on BioLogos on the old questions about whether Genesis 1 is really, as Peter Enns and, earlier, Paul H Seely maintain, teaching “old science” that is erroneous. Regular readers will know there are too many posts about that on The Hump to list easily. Why it even matters is well-expressed in a long article by Vern Poythress, to which I would add that, simply in principle, true interpretations lead to truer applications for life and so justify themselves. Poythress also has a couple of more detailed articles on specific issues here and here. Good stuff. 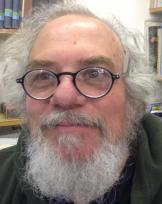 Others in the discussion have been much heavily influenced by BioLogos articles on the matter by Peter Enns, who is in turn very dependent on the biblical scholar Paul H Seely’s work. However, Seely wrote at the start of the 1990s, and it’s mysterious to me why Enns has totally ignored what has become the definitive work on ANE cosmology, the 1998 400+ page Mesopotamian Cosmic Geography, by Assyriologist Wayne Horowitz, whose “published works based on Sumerian and Akkadian texts written in cuneiform, these containing writings which in some way consider the structure of the Cosmos, are considered authoritative.” I’ve drawn on quotes from and allusions to this work in some of my own previous articles here.

As mysterious as the failure of BioLogians to engage with this seminal work – which addresses all the published cuneiform texts relating to the Mesopotamian worldview, the richest, and apart from Egyptian and Hebrew sources, getting on for the only resource for “ANE cosmology” – is the fact that there are virtually no visual representations of Horowitz’s conclusions on the Internet, compared to literally hundreds of the tired old diagrams of a world swimming in a goldfish bowl in a cosmic ocean. That Victorian vaulted cosmos has a life of its own, it appears. The only possible representation I’ve found of the new interpretation is actually an ancient one, which I’ll show below.

One reason for this may be the book’s lack of accessibility: Amazon UK‘s cheapest used copy is currently £1405.99, though Steve Schaffner at BioLogos found one in the USA at the knockdown price of $350, so you can get one for a friend too. However, I have now managed to find, and read, an online version of the first couple of chapters and part 2, which probably covers most of what is of interest in exploring what assumptions might lie behind the Genesis text. I’ll present some snippets from this in the rest of this piece.

The first key point is that, in his Introduction, although he points to the variations within the literature, Horowitz is confident enough to include a summary diagram of the basic scheme which persisted throughout the cuneiform period. Here it is (remembering that it is not the Hebrew view, though may contain parallels to it):

A View of The Mesopotamian Universe

The Heaven of Anu is the highest region in the “universe” (apart from, in a few texts, an empty space above), in which the highest god Anu dwells. The middle heavens are another divine residence, usually for the second generation of gods, the Igigi, whose chief is Enlil. The sky (literally heaven, Sumerian an, or heavens, Akkadian šamȗ, which is etymologically related to the Hebrew shemayim) is the abode of stars, clouds, birds and so on – and the space below it down to the earth either has no name or is considered part of the sky/heavens (compare Absalom, his hair caught in a tree, being described as suspended “between heaven and earth”).

Below the earth’s surface is the source of fresh waters (and a divine realm in its own right) the apsu, and finally the underworld of the dead with its relevant divinities is the bottom of everything. This forms a scheme of three heavens and three earths, which as in the Hebrew is referred to collectively as “heaven and earth”, or an-ki.

I conjecture that this scheme might actually be represented in this damaged mural from the royal palace at Mari from c1800BC. Despite claims to the contrary, visual representations of the “cosmos” are almost unknown from Mesopotamia, but this may be one. 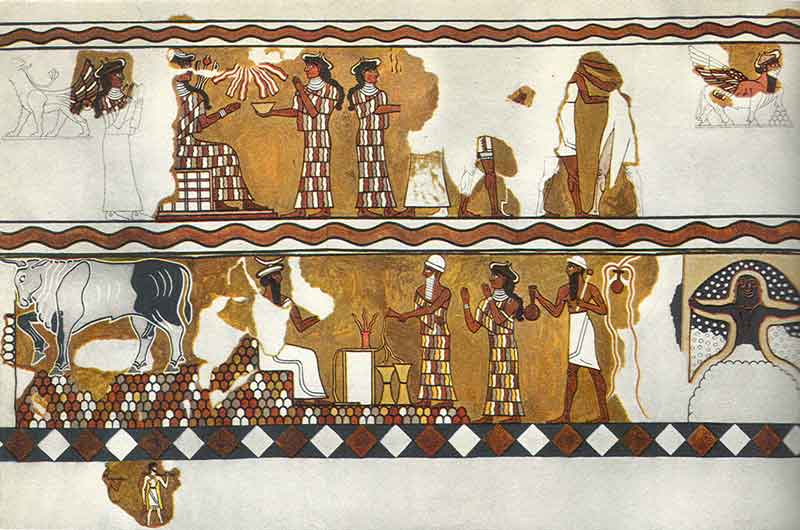 The seated god in the top row is said to represent Anu, and that in the lower register Enlil. So perhaps the smaller figures in what little remains of the third register are humans labouring under their burdens on earth (with perhaps the apsu and the underworld originally placed below). One reason for suspecting this is that the colours of the borders match those attributed in the texts (according to Horowitz) to the colours of the layers of the heavens and the dwellings of the gods at each level. I present this partly for interest, but partly because, as I said above, pictorial representations of Horowitz’s recent conclusions appear absent from the web so far.

The one conspicuous absence from this three-heaven/three-earth scheme, and from the whole book in fact, is the cosmic ocean which is supposed to have been a universal belief in the ANE. This is simply because it does not appear in the literature – anywhere. The top of heaven is empty space (or “air” in our modern thought), and the bottom of earth is… earth. There is no boundless deep to keep out above, and no boundless deep beneath the foundations of the earth (even the apsu is omitted from some descriptions).

Now, despite this Horowitz does use the term “cosmic ocean”, though strictly speaking it is anachronistic, for until the Greeks there was really no concept of a cosmos perceived as a self-contained totality, nor for the same reason should “heaven and earth” really be translated “universe” (though it often is). Such words summon up for us too much either the idea of three-dimensional models, or of infinity. But as Horowitz says in closing his Introduction:

…the available evidence leaves a number of problems completely unsolved. For example, no surviving text presents clear evidence for the bounds of the physical universe or explains what might be found beyond the limits of the universe. Such problems are endemic to this study, since no single surviving ancient Mesopotamian source or set of sources presents a comprehensive view of the physical universe.

So much for those allegedly common pictures of the universe in Mesopotamian art, and the ubiquitous modern “ANE cosmos” diagrams based on them. “No surviving text”! Horowitz, however, also uses the term “world ocean” for this body of water, and this is a better term. His main source for it (which also casts light on other occurrences in the literature, like the role of Tiamat in Enuma elish) is the so-called Babylonian World Map, which I discuss here.

Horowitz shows that the world ocean is simply the sea surrounding (as was thought) the central landmass of the world. On the world map it is like a ring with an outer bank, but it is probable that its extent was considered indeterminate laterally. Perhaps it extended to the edge of the world, or perhaps it did not. Horowitz considers that the map indicates awareness of other lands across the sea. What is absolutely clear, though, is that nobody thought it extended up above heaven, nor down below earth. 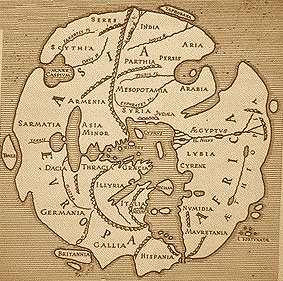 Rather, it is directly comparable to the ocean on both Greek and Roman maps of the world, and to mediaeval mappae mundi, both of which assumed the earth to be spherical, but that there was only one major landmass surrounded by a world ocean, on which one could sail, in theory, anywhere.

In my own “Genesis cosmology” I present a similar view of the “deep” (tehom) as being no more or less than the ordinary ocean, pictured as originally covering the whole earth, but having a surface just like the oceans of today. It fits the text better than the other idea. It is good to read that this is precisely the view that the Babylonians had of things, according to the best scholarship.

Now one implication of this is that the ancients do not need to be excused for believing that the universe was, for the most part, “water, water everywhere, nor any drop to drink”, because the evidence is that they did not believe that. But a second implication is this: if the “cosmic ocean”, as conceived by Seely and Enns, is a figment of modern imagination, then there appears never to have been a need for a solid vault called a “firmament” to keep the ocean out, nor of “floodgates” set into it it to let the rain in periodically. But we’ll see what Horowitz has to say about that next time.