In my last post, on occasionalism, I alluded to the recent suggestion that the universe is a “simulation” in the context of the defensiveness people feel over the importance of the secondary causes in our world being “real”:

The more powerful objection against occasionalism, it seems to me, is the vague idea that if, in the end, there is no solid basis to physical reality, then God is making us live in a world of illusion. Hence the feelings resonating around the recent suggestion that the universe is a “simulation” in which we are living.

Given the demonstrable differences between the classical world we perceive, and the mysterious nature of deep physical reality (especially at the quantum level), what “reality” means is certainly worthy of further consideration, as Peter Hickman pointed out in a comment.

With such thoughts in my mind, I settled down to watch the UK quiz programme, Only Connect. This devilish (and low-budget) show is so taxing that it makes University Challenge seem a piece of cake (and it’s usually put on consecutively with the latter, even though they’re on rival channels). Me and the wife usually get a few UC questions right, but are lucky if we spot one connection in a couple of sessions of Only Connect. Here’s one on YouTube, for our non-British readers to sample, and it happens to be the very one I watched the other day.

Given its format, it’s not surprising that the teams consist largely of nerds (or, not uncommonly, University Challenge alumni!), but as you’ll see if you continue watching, I was surprised to see that the captain of one team revealed his inner psychological state, when the speculation that the universe is a simulation arose at around 4:33. He replied that he wished it was, because it would give a sense of purpose to life. Isn’t that an interesting thought?

And he’s not far wrong. Materialism (in which the only solid reality is solid reality and “the universe is all there ever is, was, and will be”) is extremely poor at providing its adherents with a justifiable sense of meaning. Granted, materialists also tend to indulge in scientism, and so final causation (pupose) is excluded a priori on the grounds of methodological and metaphysical naturalism. But even when sufficient teleology is encompassed to admit that things are progressing from a Big Bang to Heat Death, a cosmos that is a closed system of cause and effect tends, in practice, to endorse Macbeth’s words that:

Life’s but a walking shadow, a poor player,
That struts and frets his hour upon the stage,
And then is heard no more. It is a tale
Told by an idiot, full of sound and fury,
Signifying nothing.

Christian theology has always taught that this world is, indeed, in some sense a mere reflection of a greater realm: that of God himself, and even of the “world to come”, which will, we are told, be much closer to that uncreated state of things. Perhaps it takes the existential angst of the Only Connect nihilist to remind us that it is the very provisionality and perishability of the Creation that gives us hope, purpose and meaning.

Let’s explore that by looking at what is implied, negatively and positively, in that concept of the world as a “simulation”. If you think about it, the reason that the simulation in The Matrix films is a bad thing is not so much because it is not the final reality, but that human beings created for final reality have instead been plugged into a virtual world which suppresses their true natures and aspirations. People are being lied to and controlled, for the benefit of the mysterious creators of the virtual world – a world which, in fact, turns out to be less well-constituted than the illusion in which the masses live.

Pessimism would still be appropriate if, as some have recently speculated, ours is the kind of virtual universe that some second-rate college student will be able to set up as an IT project in the future. But few can really buy into that – to the skeptics (who seem to write all the evolution textbooks, for some reason), our universe may appear meaningless and inhospitable, but it is also astonishingly diverse and coherent.

The Christian view of the universe, though it shares with The Matrix the idea that it is only a derived reality, is that it was created for us, and we for it, and that it is worthwhile in its own right. Our decisions are real, and our relationships valid. Macbeth believed life was a tale told by an idiot because he was morally deficient: for most, to be alive is to be part of a wonderful mystery that is sometimes almost intolerably beautiful.

But much of the world’s wonder is that it points beyond itself, to its Creator. That “the heavens declare the glory of God” is denied only by those who have, to some degree or another, bought into the lie that “reality” is a self-contained system. But it is because there is a God “outside” the universe, who imbues it with direction and a final goal, that we may live within its wonderful machinery with the sense of purpose our quizzer so lacks.

I should also add that, unlike The Matrix in which the existence of the higher world was a secret to be preserved at all costs, our “simulation” is intended to point us to the realities of that other world – and the links are established by our God himself stepping into his Creation both by revelation and by Incarnation, as well as by the very wisdom and beauty of what has been made which reveals, rather than hides, God.

Perhaps the “simulation” idea disturbs us because it seems hollow: Macbeth’s stage might turn out to be like a Hollywood set, where the buildings are mere facades. We walk round a corner one day, and because of a computer glitch, the landscape hasn’t been programmed and only a misty darkness is before us. In this scenario, God is cheating us by giving us only a pale and false imitation of his own reality.

But maybe a better analogy is that God has created us as players in an orchestra of a symphony he’s written. This musical experience is still a limited view of what God and his own reality is like, but in its own terms it is complete, beautiful and entirely real. It becomes meaningful when we realise that it is only one expression of the genius of the composer, and purposeful when we understand that, come the final movement, we will get to meet and know the composer – and indeed, to share his life fully.

I don’t know if that’s anything like the captain of the Snake Charmers had in mind on Only Connect, but I hope he’s able to discover it at some stage – life in Christ beats quizzing as nihilism therapy hands down. 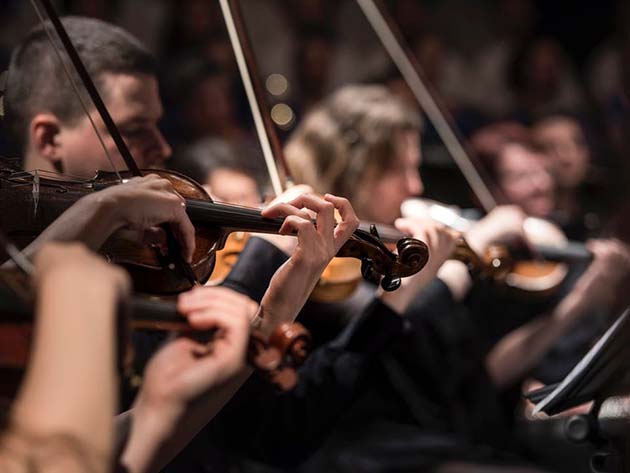 1 Response to Reality, illusion and purpose