The impossibility of ontological chance

I want, again, to critique the notion that “God uses chance” in evolution, off the back of my last piece, whose main burden was that admitting such chance into the picture utterly destroys the already dubious ability of the laws of nature to achieve divine aims, such as the evolution of mankind. Now I want to consider “randomness” from the viewpoint of divine being. Consider, for a moment, what it means for us to exist, given the truth of Christianity – as far as we can consider what is a rather deeper matter than we are used to assuming it to be.

One of the disagreements I’ve had with BioLogos in the past has been their apparent limitation of the divine role in nature to that of sustaining it and its laws in existence (here  and here), but despite my problems with that “mere conservation” position, it is quite sufficient for my purpose here. We can agree with nearly all Christians, then, that we exist moment by moment only because God sustains us in being by his power. If God, per impossibile, should cease to exist, his whole creation likewise would disappear. Presumably he could also, by choice, if not in accordance with his faithfulness, voluntarily cease to sustain our existence, and we would no longer be.

Now, there is a human analogy to this, I think, and that is the concept of an idea. Not, I should add, the concept of an idea as a preparation for putting it into some kind of practice in the external world, but the idea itself, as a real “thing,” in our minds. The idea could be an invention, such as a poem or a better mousetrap; or it could be the realisation of some truth, such as how relativity makes sense; or it could be something like the intention to mow the grass if it stops raining.

In every case, the idea is a real idea, even if it corresponds to nothing in the external world. If I cease to exist, then that idea also ceases to exist. Likewise if I forget it permanently, just as in the case of something that God has created by his will and power.

But wait a moment, someone will say, that analogy won’t fly, because physical reality is more than simply being an idea in the mind of God. Well, there are clearly both qualitative and quantitative differences. You and I can’t think up truly free beings, or a whole universe of interacting entities. But otherwise, the comparison isn’t as far-fetched as one might think. God conceives our existence, and brings it to pass by his word of power – yet it remains dependant on him each moment (on Christ, actually, for Christ “upholds all things by the word of his power” -Heb 1:3).

Also, we are told that “in him we live, and move, and have our being” (1 Cor 17:28). To us, physical reality is easily conceived as external to ourselves, to be distinguished from the inner world of ideas (at least according to current metaphysics: pre-modern thinking saw our minds as truly extending out into the world, an idea that has returned, uneasily, with quantum physics). But any talk of “outside” and “inside” God is problematic, since he has no body or brain and is omnipresent. So what difference does it make for reality to be “within” or “outside” God’s mind, if our “reality” is in any case dependant on his keeping our existence in mind?

Where I’m getting to is that the definition of “reality” must be something that is maintained in true existence (whatever that is!) by the mind and will of God.

Classical theists might even say that whatever is in the mind of God constitutes such reality, for being “simple” in his nature he does not deliberate within himself what to create, but from his perfect knowledge of himself as Creator conceives only what is true, and hence real. As the Presbyterian Robert Shaw, commenting on the Westminster Confession, puts it:

It may be remarked, that God knows things, not by reasoning or deduction, nor by succession of ideas, but by a single intuitive glance; and he knows them comprehensively and infallibly.

This understanding has the rather comforting consequence that our existence is an idea in the mind of God which is as unchanging as he is, unlike our own ideas that come and go like the wind. It corresponds, too, to the biblical concept of the “word of power” of God, or dabar, which when spoken (for example by a true prophet) actually brings into existence what it deals with. And it also goes with the Thomistic concept of God as “pure act”: God is not potentially anything, but he is just what he is. And likewise his thoughts, and hence his creation, are just what he does.

The Molinist, of course, like the Open Theist, would disagree with this formulation, for his God does deliberate on the “middle knowledge” of infinite possibilities from which he makes one actualisation. More on Molinism and chance here, but we don’t need to exclude it in this discussion, because all that matters to my central argument is the universe that God actually created (ie, that which is in his mind and labelled “reality”, which he sustains in existence.)

So if reality is, or follows from, a set of ideas in the mind of God, they cannot be non-ideas without also being non-reality. It’s not a question of God’s having not yet made up his mind, either, because ontological randomness is about God’s not (ever) determining the event, but its coming about causelessly. Which would seem to mean something like the idea popping into God’s mind as an unbidden intuition, which, according to classical theism, is the way all his ideas come to him – except that in such cases of “chance” the idea had its origin somewhere outside God, rather than in his simple, infinite, being.

In other words, ontological randomness would consist of irrational chance forming God’s mind on something and thereby lurching itself into physical reality. Does anybody really want to go there? You know where even humans who get irrational voices in their heads end up.

It remains true that all things are possible with God: the intrinsic impossibilities are not things but nonentities. It is no more possible for God than for the weakest of His creatures to carry out both of two mutually exclusive alternatives; not because His power meets an obstacle, but because nonsense remains nonsense even when we talk it about God. (The Problem of Pain) 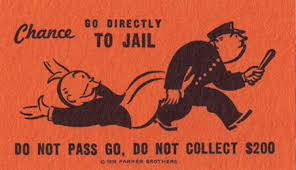 52 Responses to The impossibility of ontological chance