Heisenberg on Physics and Philosophy

There is a rare breed of scientists – amongst whom for some reason predominate physicists of the first half of the twentieth century – who have both an indisputable grip on science, and a seriously good grasp of philosophy and, in some measure, theology. Arthur Eddington is one, Michael Polanyi a second, and Werner Heisenberg a creditable third. 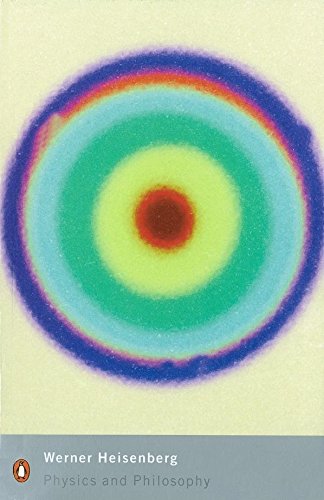 His 1958 book, Physics and Philosophy, derives from his Bampton Lectures series, and is the best book I’ve read this year, despite being the shortest at 144 pages. I won’t attempt a full review here, because I’m heading towards a particular target on which to base another post, but here are some bullet points.

In the first place he gives by far the clearest layman’s exposition of quantum theory I’ve read, and in particular expounds the meaning of the Copenhagen Interpretation, which is not surprising, as he contributed to the conference at which it was formulated. Notable is the way that he reduces the paradoxes with which we are now familiar by ditching – outspokenly – naturalist materialistic descriptions for an Aristotelian one based on potentia.

The problem is that to Cartesian naturalism, matter (even the nebulous quasi-matter of quantum particles) is inert, but is changed by the lawlike actions of other matter. You need to explain why the wave function should “collapse” (to use a term Heisenberg doesn’t, at least in the book) in one way rather than another, but there are, and provably cannot be, local variables to account for it. The naturalist description therefore has to invoke internal probability as a unique and spooky cause, which to some is as good as to say there is no cause – a claim atheist Lou Jost used to make here once.

No such problem exists in Aristotelian thought, because matter in not inert, but has inherent potencies for certain effects (and not others), which may be actualised by other entities. To Heisenberg, the significant thing here is that as soon as an observational experiment is set up on a quantum particle, it and its potencies are necessarily connected to the quantum realities of the whole of the unknown real world, not just the apparatus, and it is the causes in this vast and unknown realm that determine the probability function of possible outcomes in single particles.

Human mind, in the sense of the choice of experiment is, of course, one factor – but Heisenberg avoids the conclusion that mind mysteriously determines matter: instead, the mystery comes largely from the limitations of scientific description, and the determination from the inability of science to deal with the richness of contingent reality.

This leads to the second point, which is that Heisenberg spends a lot of time and detail pointing out how limited a source of knowledge science actually is, particularly given the nineteenth century constraints on its methodology. This is highly significant coming from the mouth of a Nobel prizewinning physicist. In fact, he gives a very useful potted history of the progress of philosophical thought vis a vis science from the early Greeks, and then from Descartes to modern times, primarily to show how the recent successes have been purchased at great cost to the intellectual compass not only of scientists, but of all of us in societies where science has been strong:

However, the emphasis on experience was connected with a slow and gradual change in the aspect of reality. While in the Middle Ages what we nowadays call the symbolic meaning of a thing was in some way its primary reality, the aspect of reality changed toward what we can perceive with our senses. What we can see and touch became primarily real….

…At the same time the human attitude toward nature changed from a contemplative one to a pragmatic one. One was not so much interested in nature as it is; one rather asked what one can do with it…

…In this way, finally, the nineteenth century developed an extremely rigid frame for natural science which formed not only science but also the general outlook of great masses of people… Matter was the primary reality. The progress of science was pictured as a crusade of conquest into the material world. Utility was the watchword of the time.

On the other hand, this frame was so narrow and rigid that it was dificult to find a place in it for many concepts of our language that had always belonged to its very substance, for instance, the concepts of mind, of the human soul or of life…p136-139

I can’t help interjecting that this process is very relevant to the way moderns interpret the Genesis creation account as “ancient science,” failing to realise that in ancient times, and even as late as the mediaeval period, meaning was the primary reality, not material. Heisenberg adds that the new physics has been the major force in breaking this rigid pattern of thought – and even more astonishingly, that this is its major contribution to the world. He might now be disappointed that so much of science, especially in biology, still appears not to recognise the change:

Coming back now to the contributions of modern physics, one may say that the most important change brought about by its results consists of the dissolution of this rigid frame of concepts of the nineteenth century…

These new results had first of all to be considered as a serious warning against the somewhat forced application of scientific concepts in domains where they did not belong. The application of the concepts of classical physics, e.g. in chemistry, had been a mistake. Therefore, one will nowadays be less inclined to assume that the concepts of physics, even those of quantum theory, can certainly be applied everywhere in biology or other sciences. We will, on the contrary, try to keep the door open for the entrance of new concepts even in those parts of science where the older concepts have been very useful for the understanding of the phenomena. Especially at those points where the application of the older concepts seems somewhat forced or appears not quite adequate to the problem we will try to avoid any rash conclusions.

I get the impression he would not regard the ever more detailed unravelling of individual genetic pathways to be one of these “new concepts.” So, regarding the proper limitations of science I think people like Joshua Swamidass, and anyone else who recognises that science has boundaries, would find book useful and liberating. Those who don’t appreciate the boundaries might even find their convictions shaken by the considered judgement of this Nobel Prize physics laureate.

The third intriguing message I took from the book was Heisenberg’s argument that, contrary to much materialistic talk, the paradoxical probabilistic world at the quantum level is not the primary reality that renders the daily world, and even our own selves, illusory or epiphenomenal. To him, the primary reality simply is the world around us – and more than that, the world of speech, which he terms “natural language,” as distinct both from the specialised terminology of scientists, or even the mathematical language in which science is most purely expressed. This fairly long string of quotations summarises this (but bear in mind it builds on his detailed exposition in earlier chapters of how quantum events are, and can only be, translated into “natural linguistic” terms in the human business of science):

Furthermore, one of the most important features of the development and the analysis of modern physics [is] that the concepts of natural language, vaguely defined as they are, seem to be more stable in the expansion of knowledge than the precise terms of scientific language, derived as an idealization from only limited groups of phenomena. This is in fact not surprising since the concepts of natural language are formed by the immediate connection with reality; they represent reality… On the other hand, the scientific concepts are idealizations; they are derived from experience obtained by refined experimental tools, and are precisely defined through axioms and definitions. Only through these precise definitions is it possible to connect the concepts with a mathematical scheme and to derive mathematically the infinite variety of possible phenomena in this field. But through the process of idealization and precise definition the immediate connection with reality is lost. The concepts still correspond very closely to reality in that part of nature which had been the object of the research. But the correspondence may be lost in other parts containing other phenomena.

…our attitude towards concepts like mind or the human soul or life or God will be different from that of the nineteenth century, because these concepts belong to the natural language and have therefore immediate connection with reality… [please note this sentence for future posts – JCG]

Whenever we proceed from the known into the unknown we may hope to understand, but we may have to learn at the same time a new meaning of the word “understanding.” We know that any understanding must be based finally upon the natural language because it is only there that we can be certain to touch reality, and hence we must be skeptical about any skepticism with regard to this natural language and its essential concepts. Therefore, we may use these concepts as they have been used at all times. In this way modern physics had perhaps opened the door to a wider outlook on the relation between the human mind and reality.

Now, in rightly connecting these insights into the logical outworking of quantum science, Heisenberg not only underestimated the entrenchment of Cartesian materialism in sciences outside particle physics, but he had no inkling of the concerted attempt to destroy natural language, and through that, belief in reality, on the part of the Postmodernists with their Deconstructionism and Queer Theory.

But that doesn’t stop him being right.