1 Kings 11-12 tell the story of one of the most significant events in the history of the kingdom of Israel – that is, the defection of all the northern tribes from King David’s dynasty thus breaking up the chosen people into two kingdoms. Northern Israel quickly lapsed into apostasy and was destroyed by the Assyrians, essentially disappearing from history.

The Bible describes this in terms of a judgement of God on the syncretism of King Solomon and his people, but the events have all the appearances of human political machinations: to all intents and purposes they appear “natural.”

Jeroboam is an Ephraimite raised to high office over the labour force of the northern tribes by Solomon. He quite clearly has some eye for power when, from 11:29, Ahijah the prophet tells him that God is about to give him ten of the tribes of Israel because of the idolatry and lawlessness of Solomon and his people. Either Solomon gets wind of this encounter, or more likely spots the danger for himself, and exiles Jeroboam to Egypt.

After Solomon’s death, his son Rehoboam, the heir apparent, meets the people who petition him, through the returned Jeroboam, who obviously is their natural leader, to lighten the load placed on them by the imperial pretentions of Solomon. Rehoboam listens neither to the people nor his older advisers, but instead follows the advice of his own peers to act tough and promise to be more of a depot than his father.

The writer stresses, at this point, that the reason for his decision was that “this turn of events was from the Lord, to fulfil the word the Lord had spoken to Jeroboam… through Abijah.” Murmurs of discontent follow, but an attempt to enforce his rule leads to the murder of Rehoboam’s Minister for Corvée and a full scale rebellion and defection of the ten northern tribes.

Now, at this stage, the neatest way to theologize this is that there are two completely different levels of explanation, which in effect do not intersect. The human drama plays out, as it has a million times through history as bad leadership, lust for power, and the vagaries of popular feeling interact. The story, in other words, makes sense in terms of secular history. If we accept the divine interpretation, we can suppose that, on an entirely separate plane, God has providentially managed events in a mysterious way in order to “govern the nations wisely.” On this model, the “historical” explanation may be seen as complete in itself, and God’s action as a matter of pure faith, invisible and hidden and, when push comes to shove, irrelevant to the situation on the ground.

If we take such a view as a parallel to the natural processes in the world, we could say that, say, biological evolution is an entire explanation, amenable to scientific investigation, of all that we see around. Any involvement by God is a matter entirely for faith, and entirely mysterious in how God might be involved. And there may certainly be truth in that if we take such a parallel seriously: in 1 Kings, real human choices made because of real motives brought about the kind of political change that is familiar to any student of history.

And yet, if we take the passage seriously, it is actually less clearly divided into separate “natural” and “divine” realms than that. For a start, the meeting Abijah engineered with Jeroboam would, inevitably, do more than set the stage for people to say retrospectively that God’s judgement had panned out as predicted. By the prophetic utterance, Jeroboam was actually being motivated to expect to lead a successful secession movement (“Judexit”? If Britain crashes out or fails to crash out of the EU, we maybe need to wonder about God’s sovereignty in blessing, or more likely judgement, in that case too).

But even more significantly, the natural political reaction of a king like Rehoboam to a rebel movement would be to restore order, even at the cost of civil war. We have a recent, and ongoing, example of that in Syria. But in this case, God calls another prophet, Shemaiah, to speak to the king and tell him to stand his troops down. On what basis? “For this is my doing.”

In other words, the “hidden” purpose of God behind the “natural” human politics and psychology that historians would regard as sufficient causes for Israel’s division actually trumps those causes. The prophetic ministry is being used by God to relativize and overrule the human situation, and prevent its usual outcome. There is, in fact, a kind of symbiotic relationship between God’s activity and human activity: the latter occasions God’s judgement, and the former modulates human activity to bring about that judgement.

We might well, then, expect to find a similar interactive pattern in God’s natural activity, particularly in the ongoing movement of creation we call “evolution.” God would indeed work through the usual processes of the world that we call “nature,” but those processes would be a truly incomplete explanation of how things happen. That would not only be because God is mysteriously “using” the processes of nature, though that would be as much a part of it as his “using” of human pride, ambition and grievance to judge an apostate covenant people.

But beyond that, just as his word, spoken “supernaturally” through two prophets actually moved the course of events in certain directions, we have no reason to exclude some direct act of God’s Logos in the history of the natural world. The fact that we might not be able to detect it would not alter that any more than missing out on hearing the conversations between Ahijah and Jeroboam, and between Shemaiah and his rather larger audience. The truth remains that history would have been siginifcantly different had Jeroboam not taken on the mantle of leadership, and had Rehoboam instigated a bloodbath that destroyed both Israel and Judah. 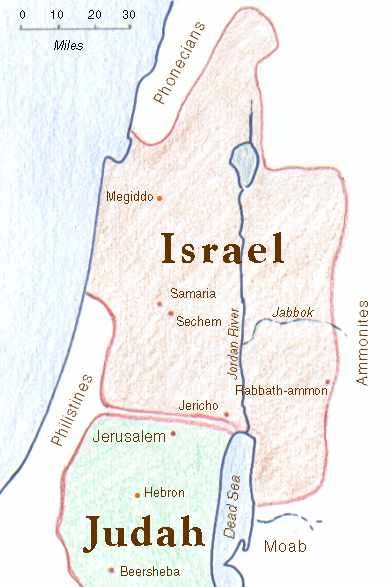