Like most guitarists of a certain age in Britain, including Dave Gilmour, Brian May, Mark Knopfler and a host of others, my ambition to play came from hearing a certain instrumental band, The Shadows, and their lead guitarist Hank Marvin. That was back in 1961, when I was nine, and one of my immediate responses then was to compose (mentally) some tunes that I would play and record if I were he. 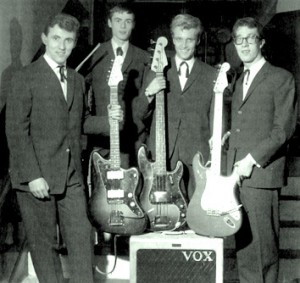 Recently it occurred to me, delving back amongst the memories, to wonder whether any of these tunes would actually work, now that I am old, venerable and actually capable of playing. So I set about amusing myself by trying to reconstruct the sounds as authentically as I could, without becoming completely obsessional. But I did go as far as emulating the original Vox AC15 guitar amplifier (replaced the following year with the famous AC30), capturing the slight Abbey Road room echo of Jet Harris’s original bass sound, mimicking the thin snare-drums fashionable back then, and recording the acoustic guitar in a 1961 manner that few sound engineers would use now.

I thought the result was surprisingly time-capsulish: it sounded pretty much as I’d envisaged it would when I was a kid. See what you think:

I was pleased that some of my musician friends thought I’d done the Shadows thing reasonably convincingly. My brother, who sat through endless hummings of it 53 years ago, actually remembered the tune but had imagined its intended arrangement completely differently. If it were actually a worthwhile piece of art (which it isn’t), I guess it could have all sorts of other effects from becoming a lovers’ theme tune to becoming a hit standard and forming my pension fund – though it’s a bit late for that now.

But it set me thinking about the old “free creation” trope again, which in its strong form talks about the need for creation to possess autonomy to avoid a “puppetmaster God”, but in a weaker, more metaphorical form voices ideas like the dignity of the creation having a separate existence from God. That latter formulation, I thought, could be applied to my tune.

Chinese Twist (I’ve retained the childish title to remind me that it came from the year of Chubby Checker, when every record was Something Twist whether you could dance to it or not) has spent over half a century years as part of my internal life, wherever such memories reside. I’ve been pleased to hear it recorded, just as if it were a “real tune”, and as I’ve mentioned it’s provided mild amusement to some folks, which it didn’t whilst it was just a collection of nerve impulses, or an impression on my immaterial mind, whichever you prefer.

But as far as I’m able to judge, the tune itself derives absolutely no benefit from actually existing, and certainly gains no more by being recorded than being, as hitherto, some kind of Platonic form in my brain. Likewise, do you suppose that the digital patterns that make up the mp3 (or the physical patterns should I ever get round to burning it on to a CD) gain any advantage over being in some other pattern (I Did It My Way, perhaps), or just a series of zeroes? Apart, as I said, from its effect on rational beings (and my dog doesn’t even twitch his ears to it), would the Universe be a better or worse place if I had never instantiated it into the external world? Is my tune, or creation as a whole, any more dignified or fulfilled for its being “out there” rather than “in here”? Would it even matter if it had never existed at all?

I think it’s obvious that this particular artifact is completely valueless, even meaningless, except as far as it is accorded value by its creator (in this case me) or by other rational beings (in this case, you). It’s actually somewhat problematic to talk in terms of its existing “for its own sake.”

Is that not, then, equally true for the rest of the inanimate creation? What makes tunes any less entitled to be free and happy than molecules? There seems little meaning in things existing unless they, others or God appreciate them. As for God, it would seem he could appreciate them just as well if they remained just his thoughts.

I certainly grant that in the real Creation, apart from the intelligent appreciation of men and angels, the forms in God’s  mind to which he gives separate reality can also have some significance to lesser sentient creatures. Thomas Nagel’s bats and my dog (Good boy, Jake!) have some appreciation of being alive, I’m sure, though correspondingly less appreciation of concepts like “dignity” and “freedom” than people do. And what is true of them is not true of “Nature” in the abstract, whatever that is. I never met a rock that showed any appreciation of its existence – did you?

It follows that any “value” terms applied to Creation as a whole must imply things that are subjectively valued only by God and the various degrees of sentient creatures. Or else they are metaphors for objective values of some sort, which really means the same thing – that God, or God and rational creatures – perceive their value.

If we take, for an example, the groaning of creation for the liberty of the children of God mentioned in Romans 8, the “creation” in mind must either be restricted to that very limited part of reality that can literally exercise longing, or else must refer to some objective good within God’s purposes, which Paul is describing analogically. It’s hard to see how that longing could be shared by Chinese Twist. As my school physics teacher Mr Brister (a great character) said when he saw one of us reading some Beatles sheet music: “It’s not the guitar that weeps – it’s the folks that have to listen to it.” It’s hard to deny the metaphysical truth of that.

It’s in that latter light that I want to cite what a nineteenth century rabbi said about freedom – which concurs very much with what I’ve said before about the profound difference between modern ideas of liberty and those of the Bible and former generations of Christians.

Rabbi Raphael Hirsch, Darwin’s contemporary, is cited by David Klinghoffer in the book reviewed in my previous post. Commenting on God’s “holiness” in Exodus 15.11, Klinghoffer paraphrases:

To be “holy” doesn’t mean to be pious. In a human, holiness “is the highest possible degree of moral freedom, in which the will to morality has no longer any resistance to overcome, but is absolutely ready to carry out the will of God.” As the verse from Exodus says, God in his own supreme freedom and independence is differentiated from false “gods” – “all other powers and forces that are deified by men,” forces, as those in nature, to which men ascribe supreme power. God alone performs “miracles” or “wonders” (in Hebrew, feleh), actions that occur, according to Hirsch “purely and absolutely by the free and untrammeled will of the doer, independent of, and mostly in contrast to, the existing laws of Nature.”

The etymology of “holiness” is actually to do with separateness, but I think Rabbi Hirsch made a sound interpretation by suggesting that God’s holiness – the fact that he acts entirely according to his goodness without any hindrance – is also his freedom (a freedom affirmed also in Christian formulations like the Westminster Confession). It’s not arbitrariness or caprice – or else God would be autonomous, not holy, in his freedom. Accordingly, human freedom has nothing to do with autonomy from God either, but the degree to which one approaches the holiness of God’s will unhindered by anything, notably by sin.

What, then, can be said about the freedom of irrational creation (let’s forget my tune, now, as being too removed from the original creation to be taken seriously)? It has nothing to do with its independence from God – and, I suggest, nothing much to so with the weaker form of the argument, the dignity of “becoming what it is”, a phrase used to justify the fittingness of evolution. It has to do, if anything, with holiness – simply with being the direct reflection of the idea formed in the divine mind. The cosmos was created, then, not to be free in the sense of “independent”, but to be free in the sense of “holy”.

So we live in a sacred realm – which ought not to surprise us since the universe is described in Genesis as God’s temple.Like the temple it’s a good place – if also in some circumstances a dangerous one.