How the venerable Bede got us to the Moon

If it weren’t such low-hanging fruit, I’d write a riposte to that oft-repeated Gnu boast about science getting us to the Moon, whilst religion does nothing useful. In truth, I did a similar thing obliquely here, way back. But it would be easy, were New Atheists not immune to reason, to point out how most of the key names in the science that led to space travel either came to science because of their Christian faith, or came to Christ through their science, or both. The names would, as anyone with the slightest knowledge of science history knows, include Copernicus, Tycho Brahe, Galileo Galilei, Johannes Kepler, and Isaac Newton, not to forget modern figures like Wernher von Braun and Sir Bernard Lovell. So in a very real way it was religion that got us to the Moon – leaving aside the taxpayers who actually paid for it. 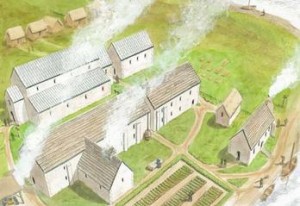 Jarrow monastery in the 8th century

But the most neglected figure in this pageant lived much earlier than them all, and is a paradigm for the complete untruth of the term “dark ages”. That man is St Bede (672-735), the Saxon monk of Jarrow who is most remembered – only remembered, in fact – for his History of the English Church and People. But he did other stuff too, most notably discovering the moon’s gravity and its governing of the tides, a thousand years before Newton got the former worked out and Galileo got the latter completely wrong (he believed the rotation of the earth caused the tides).

Bede’s project was the study of time and its measurement, and its most practical aim the construction of reliable calendars and ascertaining of the correct date for Easter. Primarily, then, a religious goal. But his methodology was as scientific as you could wish, using old data sources and theories critically, adding new and better data, processing it mathematically and drawing theoretical conclusions. In this way, for example, he corrected, both observationally and theoretically, the belief that the highest tides were at the equinoxes and solstices, showing that it was true only for the equinoxes.

Classical sources discussed whether tides were caused by the release of extra water from some reservoir beneath the earth, or by an actual increase and decrease in the amount of water – Augustine, for example, explains the latter theory without particularly endorsing it. But they were all hampered by one thing – they all lived around the almost tideless Mediterranean, and assumed the tides coincided all over the world. Thus many of Bede’s sources fail to notice that there are two tides daily – the thing that caught out Galileo, if you don’t count the stubbornness that made him ignore the reports of seafarers when they corrected him.

Some association with the phases of the moon had also been noted before: Pliny (who was like these other sources available to Bede) tried to tie things into an eight year lunar cycle.

But out here on the Northern Atlantic coast observing the tides more carefully was possible, and it was done despite the ages being so dark and all. Two seventh century Irish monastic documents collected these observations. They noted the correlation between the height of tides and the moon’s phases. Philip the Presbyter (another Church writer, of course – a pupil of St Jerome) had noted the daily change in the timing of the tides, but hadn’t noticed it corresponded to the time of the moon’s passage, a connection missed by the Irish monks too, though they had done careful calculations on the relationship of the spring and neap tides to the calendar.

Bede, however, made all these connections and revised the calculations accordingly. Here’s a taster of his style:

For as we taught above, the Moon rises and sets each day 4 puncti later than it rose or set the previous day; likewise, both ocean tides, be they by day or by night, morning or evening never cease to come and go each day at a time which is later by almost the same interval. Now a punctus is one-fifth of an hour, and five puncti make an hour. Furthermore, because the Moon in two lunar months (that is, in 59 days) goes around the globe of the earth 57 times, therefore the ocean tide during this same period of time, surges up to its maximum twice this number of times, that is, 114, and sinks back again to its bed the same number of times. For in the course of 29 days, the Moon lights up the confines of the Earth 28 times, and in the twelve hours which are added on to make up the fullness of the natural month, it circles half the globe of the Earth, so that, for example, the new Moon which emerged [from conjunction] last month above the Earth at noon, will this month meet up with the Sun to be kindled at midnight beneath the Earth. Through this length of time, the tides will come twice as often, and 57 times

the high seas swell
breaking their barriers and once again
retreat unto themselves.

Bede also corrected his calculations through his writings, as better data became available, improving his estimate of the daily retardation of the moon from 47.5 minutes to 48 minues (it’s actually 50 minutes – not a great deal more accurate considering the lack of any reliable clocks in Saxon England – it was later mediaeval clerics who developed those). He also did accurate calculations of the relationship of the tides to equinoxes throughout the year and made predictions about the tides related to the entire lunar cycle of 19 years.

Furthermore he also got information about the different times of the tides up and down the coast – it is suggested that he commissioned this from other monasteries as far away as the Isle of Wight. Who knows, the tide tables he made for Northumbrian mariners may well have done more immediate good to humanity than the Apollo landings.

But his real contribution was in drawing the right scientific conclusion from all this data and calculations about the causes of the tides, in the face of the ancient authorities. Here’s the passage:

But more marvellous than anything else is the great fellowship that exists between the ocean and the course of the Moon. For at [the Moon’s] every rising and setting, [the ocean] sends forth the strength of his ardour, which the Greeks call “rheuma,” to cover the coasts far and wide; and when it retreats, it lays them bare. The sweet streams of the rivers it abundantly mingles together and covers over with salty waves. When the Moon passes on, [the ocean] retreats and restores the rivers to their natural sweetness and level, without delay. It is as if [the ocean] were dragged forwards against its will by certain exhalations of the Moon, and when her power ceases, it is poured back again into his proper measure.

Here’s a force of attraction acting at a distance, emanating from the Moon. Newton had only to relate it to mass and the inverse square law, and you could calculate your Apollo 11 orbit. Bede’s translator, Faith Wallis, describes not only the remarkably scientific basis for his understanding of nature’s regularity, but his willingness to trust the truth and admit ignorance when the data didn’t quite fit the pattern: this, I think is traceable, like modern science itself, to the biblical doctrine of Creation in which God shows wisdom and order, but also exhibits the freedom to depart from regularity and create contingently:

So far what Bede has presented is remarkable for its critical acumen and originality, but withal in harmony with his overall vision of nature as a sublimely regular system of laws, laws which are universal and reducible to physical and mathematical explanations… it is therefore all the more remarkable – and does credit to Bede’s intellectual honesty – that his chapter on tides refuses to stop at this regularity, but rather, admits that no general theory can totally account for tidal phenomena. The tides arrive sooner in the north than in the south, but Bede also recognized that every region has a regula societatis of the Moon and the tides, what we would now call a “rule of port.”…In short, though the tides are driven by the Moon, whose sway is exercised over all the Earth, their ultimate expression is eccentrically local.

I can’t help wondering whether he’d have been as willing as those living nowadays to teach evolution as a complete and sufficient theory for life, in view of the many anomalies. He’d have been more cautious, from what I can glean. I don’t, however, wonder at all that he has been favourably compared with Albert Einstein as a scientific mind.

Except that the latter couldn’t write history for toffee. 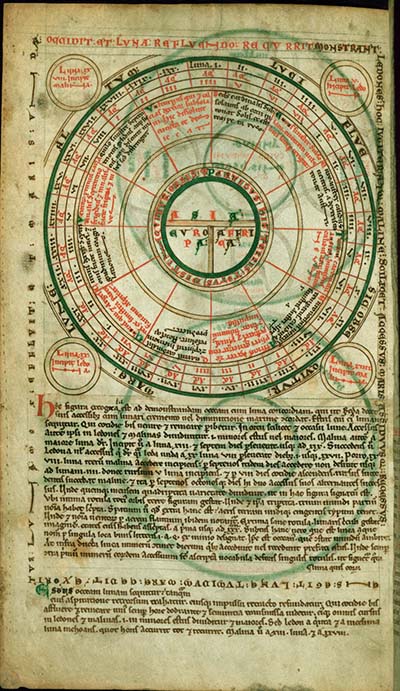 Tide diagram from manuscript of Bede