As a non-Catholic I heard about Pope Francis’s new encyclical only through the jaded words of the mind-controlling secular press: “Pope accepts global warming.” Not living in North America, where climate change skepticism seems to be part of the Faith for many Evangelicals (though still a minority of them, according to surveys), my first thought was a fairly indifferent “Good.” 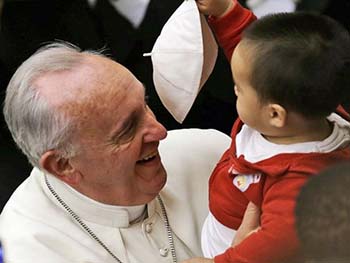 But Catholic V J Torley’s piece on Uncommon Descent, in which he expressed some surprise at the apparent sympathy towards an ID outlook in the encyclical, prompted me to download it from the Vatican and actually read the thing. And although it is in intent a general call to take environmental issues, and especially climate change, seriously (in common with parallel efforts by the Eastern Orthodox, Anglicans, Lutherans and others) it is in fact a tour de force of the application of the historical Christian doctrine of creation to the issues currently facing the world.

That makes it far more significant than the sympathetic article at BioLogos suggests. Global warming is only one small part of the message. And the critics commenting there, at UD, and in the secular press, in my view, either haven’t read it thoroughly or haven’t truly appreciated how fundamental creation doctrine is to Christian faith, or don’t yet really understand it.

It’s a long document, so I can’t really review it adequately, but I was struck again and again just how many of its themes and arguments are those which we’ve been covering here on The Hump for several years now: the ongoing goodness and sacredness of creation, the uniqueness of man, the providential immanence and care of God in creation, its corollary in the distinction of creation from God which gives it a separate but never independent existence, the direction of all natures towards God’s desired ends, the value of science tempered by its inherent limitations and so on. Francis even mentions the Promethean spirit of modern man that I have noted before as our “foundation myth”. I summed up our attitude here in the phrase “Classic Providential Naturalism”, and I read nothing in the Pope’s document at odds with that. It is, after all, the historic teaching of all the Churches.

It certainly is notable that, in this theological approach, the head of Roman Catholicism, advised no doubt by his Academy of Sciences, is at clear odds with the jaundiced view of nature espoused by ex-Catholics like Francisco Ayala and by many Protestants sympathetic to today’s angst-ridden version of Theistic Evolution.

The Catechism clearly and forcefully criticizes a distorted anthropocentrism: “Each creature possesses its own particular goodness and perfection… Each of the various creatures, willed in its own being, reflects in its own way a ray of God’s infinite wisdom and goodness. Man must therefore respect the particular goodness of every creature, to avoid any disordered use of things”…

In the Judaeo-Christian tradition, the word “creation” has a broader meaning than “nature”, for it has to do with God’s loving plan in which every creature has its own value and significance. Nature is usually seen as a system which can be studied, understood and controlled, whereas creation can only be understood as a gift from the outstretched hand of the Father of all, and as a reality illuminated by the love which calls us together into universal communion… 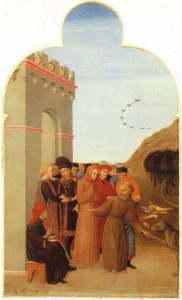 “By the word of the Lord the heavens were made” (Ps 33:6). This tells us that the world came about as the result of a decision, not from chaos or chance, and this exalts it all the more. The creating word expresses a free choice. The universe did not emerge as the result of arbitrary omnipotence, a show of force or a desire for self-assertion. Creation is of the order of love. God’s love is the fundamental moving force in all created things: “For you love all things that exist, and detest none of the things that you have made; for you would not have made anything if you had hated it” (Wis 11:24). Every creature is thus the object of the Father’s tenderness, who gives it its place in the world. Even the fleeting life of the least of beings is the object of his love, and in its few seconds of existence, God enfolds it with his affection.

The universe as a whole, in all its manifold relationships, shows forth the inexhaustible riches of God. Saint Thomas Aquinas wisely noted that multiplicity and variety “come from the intention of the first agent” who willed that “what was wanting to one in the representation of the divine goodness might be supplied by another”, inasmuch as God’s goodness “could not be represented fittingly by any one creature”. Hence we need to grasp the variety of things in their multiple relationships. We understand better the importance and meaning of each creature if we contemplate it within the entirety of God’s plan. As the Catechism teaches: “God wills the interdependence of creatures. The sun and the moon, the cedar and the little flower, the eagle and the sparrow: the spectacle of their countless diversities and inequalities tells us that no creature is self-sufficient. Creatures exist only in dependence on each other, to complete each other, in the service of each other”.

I can see how one would think him to be a sympathiser with ID, when he says:

“Nature is nothing other than a certain kind of art, namely God’s art, impressed upon things, whereby those things are moved to a determinate end. It is as if a shipbuilder were able to give timbers the wherewithal to move themselves to take the form of a ship”. 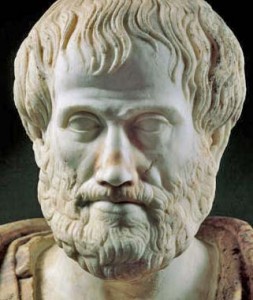 It sounds like William Paley and his self-reproducing watch – but of course he is actually echoing Aristotle, and the sophisticated metaphysical system built upon him by Aquinas and others in the Scholastic tradition. The point is that, to Pope Francis, evolution is not a significant issue provided one sees it genuinely as the means God uses to create, and not as a naturalistic fact by which to reformulate the theological understanding of what it means to create at all.

Similarly, regarding mankind he refuses to get into the “Evolution changes everything” attitude to human origins. However his biology arose, man was always desired and designed in the image of Christ – not spotted as suitable raw material amongs the random products of a self-directed “nature”:

How wonderful is the certainty that each human life is not adrift in the midst of hopeless chaos, in a world ruled by pure chance or endlessly recurring cycles! The Creator can say to each one of us: “Before I formed you in the womb, I knew you” (Jer 1:5). We were conceived in the heart of God, and for this reason “each of us is the result of a thought of God. Each of us is willed, each of us is loved, each of us is necessary”…

They suggest that human life is grounded in three fundamental and closely intertwined relationships: with God, with our neighbour and with the earth itself. According to the Bible, these three vital relationships have been broken, both outwardly and within us. This rupture is sin. The harmony between the Creator, humanity and creation as a whole was disrupted by our presuming to take the place of God and refusing to acknowledge our creaturely limitations. This in turn distorted our mandate to “have dominion” over the earth (cf. Gen 1:28), to “till it and keep it” (Gen 2:15). As a result, the originally harmonious relationship between human beings and nature became conflictual (cf. Gen 3:17-19)…

One of the theological themes that we’ve dealt with on The Hump, following the footsteps of Richard Middleton and, to some extent, John Walton, is the Genesis concept of mankind as the rational creature for whom the world was created, in order that he might in communion with, and in obedience to, God, complete God’s work of creation by bringing all things into unity in him. This, as we’ve shown from time to time, is the same work that was interrupted and perverted by sin, but which is still the eschatological hope of God’s Kingdom achieved through the work of Christ, the “new man”.

This trajectory is very much the background Francis builds up in order to make his plea, both to Christians and everyone else, for a more responsible relationship with our world. Far from being trendy environmentalism, it is full-orbed creation theology. Now, as an ecumenical document of this kind, it is not surprising that in this he stresses man’s calling, rather than Christ’s eschatological victory, any more than it is surprising that his ostensible focus is on the “issue of the moment”, climate change, rather than on the matter of saving faith.

But what is remarkable and admirable is how, apart from the grounding of his case in a thoroughgoingly orthodox creation doctrine, he shows how every aspect of this doctrine impacts on the issue in hand. He repeated emphasises the inseparable link between ecological damage and economic inequality: poverty is ontologically the same problem as pollution. Economic issues like the global crash cannot be isolated from the political systems that close their eyes to environmental damage. Technological solutions cannot be 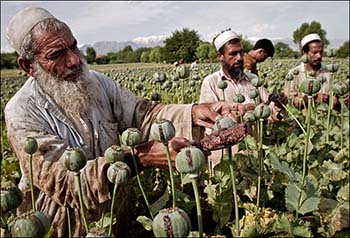 abstracted from the attitudes to creation that prompt them and lead also to their unforeseen problems. There is an inseparable link between worldwide scientific efforts to produce clean energy, and the love of individuals and small communities for their familiar human landmarks. Superficial consumerist lifestyles are intimately related to a thowaway attitude to our world. “The external deserts in the world are growing, because the internal deserts have become so vast” (Pope Benedict).

Implicit, then, in the encyclical is the message of Genesis, and the message of the gospel, that the real issue is the reversal of humanity’s estrangement from God, which alienates him from God’s image in man and from God’s good creaton; and yet it is put in a way that, potentially, could concentrate the minds of politicians, scientists and peoples to achieve some practical good in the secular here and now:

Fraternal love can only be gratuitous; it can never be a means of repaying others for what they have done or will do for us. That is why it is possible to love our enemies. This same gratuitousness inspires us to love and accept the wind, the sun and the clouds, even though we cannot control them. In this sense, we can speak of a “universal fraternity”.

Will it, in practice, achieve that? It would be naive to criticize one letter from one pontiff if it failed to change the mind of the whole world in a moment. Even Jesus neither sought to do that, nor achieved it. But 1/7 of the world is Catholic, and the voice of their collective spokesman ought to have some influence. Not only that, but a good many of the big players in environmental issues – politicians, economists and scientists, among others – are Catholics who will take the arguments in Laudato Si’ seriously – as will other Christians who know their Bibles well anough to appreciate its arguments.