I’ve argued in the past that Open Theism is only the logical outworking of classical Arminianism, and that Arminianism itself is an outworking of the Renaissance insistence on autonomy as the basis of freedom. This is fundamentally different from the classical understanding of freedom as found in the Fathers like Augustine, in the mediaeval scholastics like Aquinas and in their intellectual descendants in the Reformed tradition like Calvin, Luther or Edwards. One is looking, essentially at two different metaphysical assumptions rather than merely two theological interpretations, and in fact they roughly correspond to the categories of the “concurrentism” (classical) and “mere conservationism” (Arminian) I’ve explored recently.

One can see this in leading Arminian Roger Olsen’s mode of argumentation here. Here he explicitly argues for the necessity of applying ideas of God’s self-limitation within “classical Arminianism” rather than just in Open Theism, in order for there to be the possibility of real relationship between creation (especially mankind, of course) and God.

One can sense here the whole dynamic and logic of the debate: unless God is entirely separate from the process of human choice (ie not in any sense guiding, determining, cooperating, creating continuously, foreordaining, predestining, prevening, facilitating and all similar concepts underpinning the alternatives to conservationism, ie concurrentism and occasionalism); that is unless man is fully autonomous, then true relationship is not possible. Note that this is a logical deduction which assumes, in fact, that God must be a person like us rather than “trans-personal”. You and I could not have genuine relationship if you “lived and moved and had your being” in me, or vice versa. Therefore, he says, God couldn’t either – and that is the crux of the dispute, for classical theism always taught that God is not a person like us, though in his divinity he is personal and he relates. He can have real relationship even as he is the ground of our moment-by-moment being, because he says he can in his word, and does in fact, which should be good enough for us.

Similarly, Olsen says, God must be separate from creation (thus limiting his deity) or be responsible for evil: implying he must be quite separate from natural creation too or be accountable for natural evil:

The only way to avoid that (logically, in my opinion) is to affirm God’s voluntary self-limitations in relation to creation.

Fortunately, most divine determinists (including most Calvinists and many Lutherans) DO NOT go so far as to attribute sin and evil to God. In fact, most strongly deny that God is the author of sin and evil. The point is, however, that logical consistency would seem to require that within their systems. And we all know someone who has taken it that far.

We need to point out exactly where the logical systems differ to discern the crux, and it’s in firmly in the outworking of concurrence, not in the failure of Reformed logic: Aquinas or Calvin would argue that when when Joseph’s brothers plan an event for evil, God determines the same event, but for good. While the High Priest cynically advocates Jesus’s murder rather than risk Roman retribution on the people, God speaks prophetically through him of Jesus’s substitutionary atonement.

So on that crucial difference you must make your own choice, and most of your key theological positions will follow from it if you’re consistent. And that includes the self-limitation of God in the original natural creation. The logic of Olsen’s reasoning is that creation is a kind of costly giving up of sovereignty for God, and we see that kind of thought prominently in the modern TE literature, with its strong tendency towards kenoticism, conservationism, Open Theism and Theistic Personalism – if you’re unclear on what these are, search the blog and settle down for a long read!

But you’ll maybe be familiar with the “adolescent child” analogy of John Haught, Darrel Falk etc, in which God takes the risk, in self-giving love, of allowing his creation the “key of the door” of autonomy, to create itself, and make mistakes perhaps (in the case of life that means an evolutionary process based on death, competition and selfishness). God is, in this scheme, not responsible – and so cannot be acting within it as he would in concurrentism. Indeed, the extended logic necessitates that God’s primary role is in entering into the inevitable suffering creation has caused, through the Incarnation, which becomes a cosmic event in the sense that human sin is merely one symptom of an entire creation needing redemption, in effect by virtue of God’s having created it as he did… though he is somehow not responsible.

Many prominent recent writers have taken this divine limitation idea further: since God is infinite, creation must also be God’s self-limitation by his voluntary withdrawal from part of himself – the bit where an autonomous creation can do its thing free from the tyranny of coercion, stultifying design and divine determination. For creation to become more, God must inevitably become less. Note, once more, the centrality of autonomy here – the divine immanence integral to concurrentism is simply unthinkable, for what creation does is defined as what God doesn’t do, and what it is as what he isn’t.

Now this doctrine of God, and this doctrine of creation, are almost the inevitable outcomes of that one crucial metaphysical step regarding divine action. So maybe (though I’m happy to be argued out of this) it’s a necessary conclusion from Arminianism, whose foundation is that same one step. The doctrine is internally consistent (barring the incoherence of attributing freedom to inanimate creation), and undoubtedly has a certain grandeur, though it’s predominantly a sombre, even gothic, grandeur. But Olsen’s “logical necessity” aside, does it match the biblical picture of creation, which is whence I want to draw my creation doctrine?

I suggest it isn’t. From Genesis to Revelation, the predominant picture isn’t of God’s limiting himself in creation at all, but of extending himself (if that were possible), of overflowing beyond himself, and that for his own pleasure, and with a sense of abundant joy.

For a start, the language of Genesis 1 is that of sovereignty, of God’s word of power calling into being things that were not at all, but are now, and very good to boot; not of God’s shutting off parts of himself or sending them away to be free. In fact, the seventh day shows him coming to dwell and rule within his cosmos, and enjoy his realm.

In Revelation 4, the 24 elders worship the Father because “thou has created all things, and for thy pleasure they are and were created.” This accords with the statement of sovereignty in Isaiah 46: “I say, ‘My purpose will stand, and I will do all that I please.'”

The writer of that great creation psalm, 104, sums up his account of an immanent and provident God (as responsible for death as for birth): “The glory of the Lord shall endure forever: the Lord shall rejoice in all his works.” And that’s not surprising, because elsewhere the Lord challenges Job by asking him where he was at creation while: “the morning stars sang together, and the angels shouted for joy.”

Apart from specific passages like these, the very biblical description of creation implies exertion and addition, not limitation and subtraction. A couple of years ago, in the context of a BioLogos discussion on “co-creation”, I annoyed a few people by suggesting that “creation” is a term properly reserved for God alone. Certainly the Hebrew bara is used only of God, and though it includes ex nihilo creation, it covers more. Even so, one of the two main analogies of creation is the deeply human one of the potter or artisan. As it is a major scriptural theme we are justified in drawing out the analogy.

Imagine (or better still, remember) any “creative” act: the painting of a picture, the writing of a song, the formulation of a theory, the giving of a talk, or even just the humble act of erecting a garden fence or creating a meal. All of these have a cost in terms of effort, but they are the absolute opposite of “self limitation.” Doubtless they are the product of what we are, but in a sense they increase us – we have done something that we’ve never done before, that would not have existed without us. And the universal feeling that gives us – whether we’re the palaeolithic maker of a bone flute or mammoth carving, a carpenter finishing a chair, or a software engineer producing some software, is to step back in contentment and satisfaction and … joy. The pride of workmanship is the most basic of human feelings, and it diminishes us not one jot. Rather, it can earn us applause, fame or riches. And it’s a pride born of a profound love for the thing created, and the material we work with. So why would that not also be true of God, as indeed the Bible suggests it to be?

I’ve known a few people who were never happy with even their best work – but that’s a purely psychological problem not shared by the omnipotent God. Our joy may be dampened if our work is not appreciated, or is swept away in a fire, and in that sense we can surely share something of the Lord’s grief at mankind’s sin and the despoiling of nature. But, I suggest, that is a very different thing from the idea of God’s loss and sadness in the very business of creation, for which I don’t think there’s any more warrant in Scripture than there is in common experience.

It even seems a little unhealthy to me – weren’t we intended to enjoy creation and magnify God in it, rather than dwell in it as a damaged thing achieved only at the cost of God’s becoming less than he was? 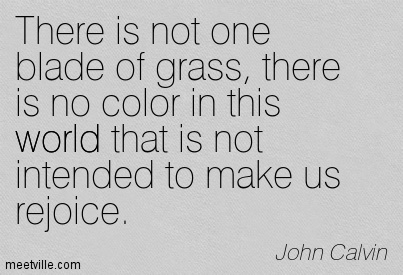 7 Responses to Creation, self-limitation and joy