How well informed is the universe?

In a way the recent 2-part series on BioLogos, by Paul Julienne, is quite groundbreaking. It’s the first time in an article at BioLogos I’ve seen information cited as a fundamental constituent of the universe, in the way that Paul Davies and others have advocated for many years. Perhaps it is because, like Davies, Julienne is a physicist rather than a biologist – and a quantum physicist at that. He is particularly unusual, in the TE setting, in using DNA as an example of the same principle of the primacy of information, and in linking all those to the wisdom of God personified in Christ, the Logos. The articles could easily have been written by an Intelligent Design researcher, actually.

Now I must quickly add at this point that theistic evolution (of the BioLogos type) tends to be friendly towards the idea of cosmic fine tuning. John Polkinghorne, for example, has written extensively on it and this was referenced in Ted Davis’s series on him. It is the link to information, per se, that is less common, and the application in biology that is usually a no-go area. By this I understand that Julienne is slightly out of the BL mainstream.

I would have liked to give source, chapter and verse on why TEs generally are unhappy with “fine tuned biology”. The fact is, I can’t remember where I read quite an authoritative spokesmen arguing the case in detail. I can, however, remember the reasoning, which was this.

Cosmic fine tuning relates to God’s creation of the cosmos ex nihilo, the initial act of creation in which all things physical came to be. It is therefore easily seen as God’s provision of initial conditions and laws by which all things would be ordered. However, for God to bring about changes thereafter, perhaps by “injecting” information into living things in some way to direct evolution, would be an interference with the laws he had set up, and the autonomy of those processes and entities affected. Maybe you’ll spot that we’re on the familiar ground of autonomy again – more to follow.

As Julienne points out, one of the first people to become aware of cosmic fine tuning was Fred Hoyle, who came close to some kind of belief in a superior intelligent power at the end of his life. His unravelling of some of the astonishing properties of carbon led him to conclude:

A common sense interpretation of the facts suggests that a superintellect has monkeyed with physics, as well as with chemistry and biology, and that there are no blind forces worth speaking of in nature.

Now, Hoyle was speaking colloquially, without attempting philosophical rigour in this statement. But by the standard of the theistic evolution position I mentioned, he was blurring its careful distinctions. To him, chemistry, physics and biology had all been tinkered with in a rather marvellous way. The TE would say that the laws of physics had been created fine-tuned – not monkeyed with – and that the chemistry and biology are the direct result of that. The big issue, then (for the TE – not apparently for Hoyle) is interference or non-interference.

Going back to some of my recent philosophical meanderings, it should be clear pretty quickly that this question depends directly on whether one is a conservationist or a concurrentist. If you’re the former, then for God to create ex nihilo is to bring into being what he then sustains in existence. But any other action upon that created order is “interference” – Hoyle’s monkeying.

To the concurrentist, however, God is active in all events, from within as it were. Some would describe that as creating everything moment by moment, so that “sustaining” is the re-creation of the cosmos in each new state. More commonly it’s seen as God’s being the first cause of every event, working before and with the true efficient causes he has created in nature towards the ends he has purposed for them. This can no more be seen as interference than Hoyle could seriously consider his superintellect as “monkeying” with physics if it designed it to begin with.

Often God, in this view, will be renewing, or confirming, the information already built into the physical universe, for example the peculiar nature of carbon 12. But it could sometimes, or even regularly, involve the input of new information into the universe in a creative and governing way. The detailed “how” is open to speculation (by being the cause of quantum events, by governing the statistical outcomes of chaotic events etc) but is less important than the “what”. To be quite frank, the actuality of ongoing divine information is the difference between deism and theism – and of course, that ought to define theistic evolution as opposed to deistic evolution.

The distinction between God’s “right” to involve himself in cosmic fine tuning but not in biological process (or providence more generally) is, therefore, essentially a question of a metaphysical commitment to conservationism or concurrentism, and very little else that I can see. 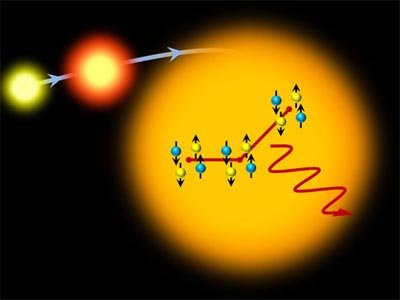 4 Responses to How well informed is the universe?