Arguments from natural law form an important part of Catholic deliberation on issues like abortion, but play little role in Evangelical thinking (though they are implicit in the US constitution and were explicit in Martin Luther King’s politics). However, I suggest that natural law is an important implication of Christian creation doctrine, and another demonstration of the way that, as I have argued in various places on The Hump, creation is foundational for much of our correct understanding of the faith. Creation is not just about scientific origins.

In my piece on essentialism, the concept of things having essential natures, I tried to show how such a concept was necessary if we are to think of an entity called “man”, rather than just a collection of similar beings to which certain properties happen to tend to apply. Theologically, unless there is something like a natural form called “mankind” it is hard to account for things like the image of God, the fact of sin, the need and possibility of salvation and, along with that, the propensity to be represented by Christ. All these require such a thing as “human nature”. Let’s take that as a given, whether we hold it to be the product of evolution or any other process of creation.

That means there is such a thing as human nature, as distinct from lion nature, chamelion nature, cabbage nature and so on. By “natural law”, I mean the principles on which a particular nature operates. An organism’s “law” operates appropriately for its own good, in the theological sense that someone like Aquinas might use “good”, ie not simply for its own survival, but for the good purposes for which God created it, whatever they may be.

It’s a truism of nature that organisms generally follow such laws without any reflection, which is another way of saying they glorify God simply by being what they are, or as Aquinas (again) taught insightfully, each in its nature reflects some aspect of the totality of God’s glory. So the docility and speed of the deer, or the stag’s pugnaciousness during the rut might be said to comprise part of “the law of the deer”. Whereas the lion’s preying on the deer, and even the infanticidal tendencies of the male we discussed in an earlier thread, are appropriate and natural to its own “law”. The law of the salmon might include its astonishing migrations on its own behalf, but also its foundational place in certain food-chains by its prodigal egg-laying and its own death after spawning.

What would be considered to be against natural law might be the coercion of a dog by human manipulation to walk on its hind legs, the training of dolphins to blow up ships, or engineered genetic chimaera. These are aberrations – but they prove the rule that each creature has its own law: it is natural for lions to hunt, but not for deer to do so.

Now humans too, if we respect the biblical account, were created with natural tendencies to follow their own God-given “goods”: God saw that they were good, ie suitable for their purpose, or following their appropriate natural law. I take it that this is why no commands were given to Adam and Eve apart from (for God’s own reasons) the prohibition on eating the fruit of the tree of knowledge. Man, it seems, began with the animal’s unthinking fulfilment of its own nature, but also as a rational being had, as part of his freedom, the dignity of following his nature by reflective free choice – and through the serpent’s temptation, he used it to corrupt his nature, and so his will.

Sin, then, is a corruption of man’s natural law, to the point at which we no longer follow it naturally or hardly, in extreme cases, know it at all. It can be deduced that what we now know as “God’s law” was given to Israel to remedy that ignorance, for Galatians 3.19 says “the law was added because of trangressions.” As the same passage shows, the law couldn’t make us obedient to righteousness, but it could teach us what righteousness is for us. And that suggests that, unlike the animals and Adam and Eve in their sinlesses, we no longer know fully by nature what’s good for us. We’re in bondage to inhumanity, and yet take it for freedom, like rats brought up in captivity. And that’s why the psalmist waxes so lyrical about the perfection of the law and its ability to bless, despite what we now see as its inadequacy for salvation. In effect, it restored the knowledge of natural law to a race in which it had become attenuated, and showed us what we were made to be.

Not that the natural law was effaced entirely by the Fall. Romans 2.12ff shows us that Paul recognised conscience as an innate characteristic even of those ignorant of God’s law, though its strength, it seems, is only enough to form a rough ethical framework, a sense of guilt, and accountability before God as Judge. Only inadequately can it bring us into line with our God-given nature. Nevertheless, this is a key concept, for it explains the universal sense of morality amongst mankind, and the attraction of the gospel even to those unacquainted with the story of the Fall or of the law. It is only creation doctrine (in combination with a doctrine of the Fall) that accounts for this universal moral sense, for its variability and for its constant conflict with our actual behaviour. The natural law of conscience, then, is what remains of human natural law: and the law of God is congruent with it, because God created us good.

Catholics have tended to use the natural law concept in hard moral cases on which Scripture is relatively inexplict, but for my purposes I’m happy to accept the most obvious examples. Murder is not that rare, but conscience for killing is so strong that even hardened killers often feel guilt compelling them to seek to make reparation more strongly as the years go by. I’ve had patients who told me they had abortions decades before for apparently justifiable reasons, yet who never had a single day go by without guilt for having shed innocent blood. That demonstrates an innate standard quite different from the robin that kills its territorial rival, the spider that eats its mate or the lion that kills its predecessor’s cubs.

Similarly, the sense of property is so strong amongst us that even communism (or monasticism!) cannot eradicate the desire to acquire goods, or the sense of injustice when our own, or those of others, are purloined. Parents are honoured in all societies, at least in principle. And so on.

Let me note, since it has some relevance, that natural law shows us, if we reflect, that what is good for humans is not the same as the absolute goodness of God himself. God’s law is the law he gives us, and though it reflects his character it is not the law he must follow himself, any more than the law of the spider or the lion should be replaced with Mosaic law. God is love, and the general commands to love God and love your neighbour embody that for us. But though God can be said to love himself, and is loving towards all he has made (Ps 145.9), this is not the worship and adoration required of us, and neither does he have neighbours he could love “as himself”.

If we consider the Ten Commandments (still a generalised expression of the law) it rapidly becomes clear that virtually none of them are appropriate to God himself. Space prevents a full exposition, but how, for example, could the God who owns the world and everything in it (Ps 50.12) covet? Or how could he steal, since he gives and takes away by right (Job 1.21)? And God, who creates all life and decides its natural term, is not thereby guilty of murder (though confusion on this point has led many to a theology in which God has no involvement in death lest he break his own law – but see 1 Sam 2.6, Ps 104.29-30, Ps 139.16, Eccles 12.6-7 and Isa 11.4 etc). 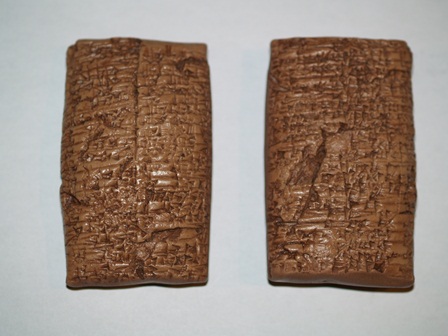 It follows, therefore, that the specific commands of God are a gift from God for man, and reflect the nature that God gave us at creation, but which was distorted and attenuated through sin. It follows also that the law of God is of universal application to humanity by dint of our very origin from God: it is not just for the religious, and it is not obsolete for the Christian. Neither can morality change by consensus, or by law, or by evolution – whilst we are human, there is a way that is good for us, and to depart from it is dehumanising.

A very quick aside – there could be a long discussion about how the Mosaic law with its specific cultural applications could be said in any way to match a universal natural law. I really expect better of our readers than that – the hermeneutic principle of seeking the ethical imperatives behind culturally-set laws dates back to biblical times, and it is the ethical imperatives that are the heart of torah: if in doubt read Chris Wright’s excellent book on how the Mosaic Law is still ethically prescriptive.

To draw this to a close, let me connect it to my “classic providential naturalist” view of creation. If God’s ethical and moral standards for us are not imposed as an external standard, but in order to reinforce and restore an internal one, and if they are specific to mankind’s nature and not just a universal standard which eels and eagles, pitcher plants and paramecia should all obey but never have; then we must have a nature given and shaped by God.

If, as the “free process” people say, we evolved unguidedly from an autonomous natural creation, then God would have no business imposing an external standard on us against what we are by our natural origin; secondly any nature we have evolved would only fortuitously have anything in common with what God would like us to be; thirdly natural law would be an evolving thing too, as indeed the shifting sands of modern morality show to be the comntemporary view; and fourthly we ought to be training the animals to love their neighbour as themselves – teaching them to love God might prove to be an ethic too far for their abilities.

As for us, to seek righteousness is to seek to return to how we were created, of which the Lord Jesus is the exemplar… unless of course moral truth does evolve, in which case he’s unfortunately behind the curve.