Incarnational insights on the emergence of man

It often seems to me that in the discussions over how evolution impacts theology, the theological adjustments felt necessary by many are often apparently snatched out of the air with little thought over how they change very basic Christian truths about, say, the nature of God himself. And that’s just when the theologians are writing. Start reading the comments of ὀι πολλοι and it’s like being in a rowing boat in the vicinity of Cape Horn. Somehow, it brings to mind an image from art history. 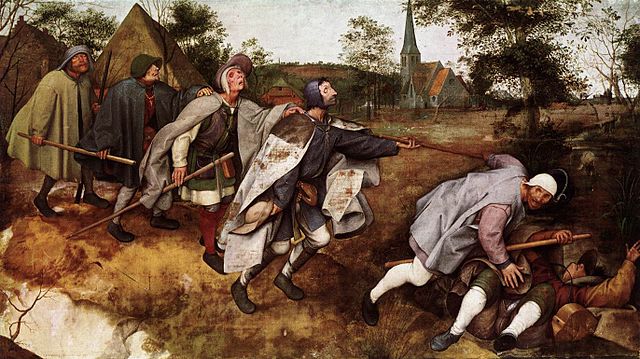 One example. It struck me, in reflecting on recent allegedly Evangelical “evolutionary alternatives” to the biblical notion of sin, how fundamentally dualistic most of them are. Many picture a naturally evolved human animal, to which God chooses somehow to add something – perhaps the soul, or conscience, or some relational revelation. But sin is seen as an unequal struggle between the new God-consciousness and the old selfish animalism (leave aside for now the validity of evolution as a self-aggrandizing process). “We” lose the fight to the “It” of the animal nature, and so God has to sort it out and save us.

Whether or not the proponents of such ideas are wedded to a formal Cartesian view of some immaterial “ghost in the machine”, there is still the taint of a dualistic idea of “I” as the driver of some over-powered biological muscle car over which it is all too easy to lose control, as if a sheep might suddenly lapse into acting like a lion through inattention. Though the label is “evolutionary creation”, in practice it seems as though the “evolution” and “creation” bits operate under separate management, and at separate times, and end up producing conflicts. But though, post-sin, Scriptures like Romans 7 do present a conflict picture, this is not that of superadded-humanity against animality, but of the renewed human nature against the remnants of unnatural sin.

The best theology, whether based on the biblical Hebrew and Greek ideas or scholastic philosophy, sees man as an essential unity even when aspects such as “the soul” are distinguished conceptually. We are no more compartmentalised by our created nature than an animal is against the vegetative (in Aristotelian terms) aspects of its nature – the animal just is what it is in toto, at least until its nature is corrupted by some accident or by human interference. And that’s because however God creates natures – and that includes human nature – he creates something that is all of a piece, and not a Ferrari with a teenage driver, or even just the Ferrari with interchangeable parts. Any theology that ignores that is ignoring what it means for God to create at all.

A parallel example from theology (not least because the similar fundamental errors about God’s ways are often espoused by the same people for the same rationalistic reasons) is the Incarnation of Christ. And I want, in this, to point to the work on the subject done by one of the greatest Christian philosophers of the twentieth century, the late Bernard Lonergan. Unfortunately, as a Jesuit he wrote mainly in Latin, with his best stuff being buried in massive tomes now gradually been translated for the Collected Works. So he appears to be much less familiar to, and hence influential upon, Protestant academics than those like John Hick, to whose approach he is something of an orthodox antithesis.

In fact, so far I’ve only been able to whet my appetite for his work from summaries, but there is useful essay on his thinking on the Incarnation in an essay here. The author, Thomas Whaling, points out that the catholic doctrine of both Western and Eastern Churches, the Chalcedonian definition of 451, has been widely called into question by moderns as being incoherent. But the truth is it is only incoherent because of the presuppositions under which moderns labour. It is, indeed, paradoxical in insisting in the two natures of Christ perfectly conjoined, and yet not mingled, nor either of them suppressed. He is at all times truly and fully God and truly and fully man.

Whaling points out how commonly modern views of the hypostatic union of God and man in Christ in effect picture two “drivers” who control the life of Jesus at different times and at different levels. Two kids are wrestling with the Ferrari! God the Son, for example, is conscious of the human personality at both its own conscious and unconscious levels, whereas the human Christ cannot in turn be conscious of the Divine. Objections to such a “split-personality” (like that of John Hick) end up by ignoring one of the natures almost entirely, and in today’s intellectual climate it is usually the divine that is sidelined.

This is one major motive behind the kenosis theories  so popular in science-faith circles. An argument for it might proceed from the fact that for Christ to be truly human, he cannot have been aware of his divinity, or capable of acting divinely, but must be fallible like us. Ergo there is a motivation to find some justification for his having left the divine effectively behind, and so the entire theology of divine kenosis is built up from one misinterpreted word in Paul’s letter to the Philippians. One knock-on effect of that is that with the Son being present in Christ only in the most tenuous of ontological senses, biblical models of atonement that depend on the divine nature of Christ are an embarrassment, or alternatively become easily ridiculed, as in the idea that substitutionary atonement consists of God killing an innocent (and of course, uninformed) human.

Of course, the argument that Jesus must have been ignorant of divinity to be a man is no more or less true than its counterpart – that Jesus must have known his divinity in order to be God. There is a good case for leaving such deep issues to be held in the tension of faith. But, perhaps because prevalent false answers lead so many people astray, Lonergan’s approach seeks to answer reason with reason. He willingly shares the “low christology” approach (that is, arguing from man to God rather than vice versa) of the moderns because, as humans, we can only comprehend what is human in Christ and not what is divine. And so he looks to investigate the psychology of Christ. But he argues that this need not lead to a rejection of the Chalcedonian teaching, provided ones terms of references are clear and correct. In particular, he points to a misconception of “consciousness” that is usual in those who reject Chalcedon:

When it is said that Jesus could not be conscious of his divine nature, the term ‘consciousness’ is in need of clarification. Lonergan cautions that “a subject as conscious is not to be confused with a subject engaged in successful introspection.”

The necessary condition of consciousness, in the sense used by Hick, implies a successful introspection that assumes not only a subject as conscious but also a subject that has understood and conceived some psychological system and is seeking to  understand and verify this system in his or her own experience by a successful outcome of this inquiry.

In this case, a low christology demands of a Chalcedonian formulation that Jesus have, not just a consciousness of his divinity, but a rational self-awareness as God. Yet, we cannot be conscious of a judgment – only conscious while judging.

The essay is closely argued, and so I don’t want to prevent you from following it by abbreviating it here. But the starting point is that consciousness is entirely a subjective, experiential, thing, and not capable of being perceived as the object of consciousness. As conscious humans, we experience things as humans do, and consequently via the application of our consciousness to our perceptions come to know that we ourselves are human. Lonergan describes consciousness as a “preliminary unstructured awareness” within the person that serves as a, “prerequisite to intellectual inquiry.” This awareness is not a perception nor the act of perceiving. It is experience.

The failure to command a sufficient understanding of human self-awareness and self-possession finds no exclusion with Christ in low christologies – rather it highlights a methodological problem in such christologies. Remedying this problem allows us to continue with both a low christology and the Chalcedonian tradition.

The argument proceeds by showing the error of trying to picture Jesus as perceiving the divine from his human nature, or vice versa, which is not what Chalcedon had in mind at all:

That distinction does not, however, mean that Jesus in his human nature was unable to perceive his own divinity. Being sinless, he was unlike us fully open to the nature of God (possessing Beatific vision, in Lonergan’s AT Catholic terms). He was therefore able to attain self-understanding of his divinity by the same means that he, and we too, acquired self understanding of our humanity: the comparison of our conscious experience with our perceptions.

The net result of all this is that, whilst maintaining the “separation of the natures” in accordance with the historical doctrine of the Church, we can also rationally come to terms with Christ’s unity as a person, functioning seamlessly as both human and divine:

One must first exhibit consciousness so that the experience of oneself is possible, one must understand the nature of that person as data of sense and consciousness affords, and one must be able to form an understanding of this person and affirm that this person is actually oneself. The difference is that in Christ there are two natures to be understood in the person, yet this does not alter the process on the side of the subject as human, making the process still properly human.

Now it seems to me that grappling with this greatest of spiritual mysteries, the coming of the Son of God in human flesh as formulated by the Council of Chalcedon, and finding, as Lonergan does, that even this exercise provides insights into God’s ability to achieve this in one person – our Lord Jesus – and not as some strange and unnatural chimaera, should enable us to see that the human condition is comparatively simple.

If Christ in two natures can be intelligibly seen as one Christ (even though it may stretch our philosophical brain cells to comprehend the arguments), then how much more should the ordinary run of the human race be seen as an inseparable created unity, and not some strange hybrid of selfish evolution and God’s self-giving? Our inner disorder, surely, is all our own work from defying our single God-given nature.

Our salvation is firstly intended to bring us back to the divine order of our creation, and then to become like Christ, the God-Man, in our spiritual union with the Father.

12 Responses to Incarnational insights on the emergence of man