Here is a link to chapter 6 of my book.

In it I examine the possible reasons for the apparent shift from a generally optimistic picture of natural Creation in the older writers to the pervasive modern pessimistic one.

You’ll see that I lay great stress on the myth of Prometheus, which I think is a highly significant factor whether taken literally (the influence of the myth itself on early-modern thought) or more figuratively as representing attitudes to God and man that became general at that period. Some may be interested in the mental process that led to this conclusion.

As Nick Needham and I shared more and more ancient sources back in 2012, a clear demarcation began to emerge between sources before the time of Reformation, and those afterwards. It was hard to see any theological reason why such a change should have occurred – and especially since it seemed to be far more prominent amongst the Reformers than their contemporary opponents. So I began to search for possible explanations by reading about the changes in the intellectual landscape around that time.

I was particularly struck by the anthropocentrism of the Italian Renaissance, to which Cameron Wybrow draws attention in his book, The Bible, Baconianism, and Mastery over Nature, and which is well expressed in the rediscovery and development of the Prometheus myth. This is dealt with in more depth in Ernst Cassirer’s classic The Individual and the Cosmos in Renaissance Philosophy. The Prometheus myth excited me as seeming to explain a lot about the attitudes of our own culture to many things from science to free will.

Around that time I finally took the trouble to look more closely at a Greek quotation that John Calvin uses in his commentary on Genesis 3.18 (the “curse on the ground”), which I’d ignored as merely being a classical bolster for his rather innovative view of the fallenness of nature. I realised with a shock that it refers to the Prometheus myth (or strictly, to the related story of Pandora), and that here was a direct application of that myth to a key text for the concept of fallen Creation which I was tackling.

For a few days I had (for the only time in my life) that feeling scientists occasionally get of knowing something that nobody else has discovered before. I still feel that to be true, though the shrugging of shoulders from various people who have read my thesis suggests that to them it is about as persuasive as cold fusion.

But you can judge for yourself, and come up with a better explanation if you have one. And meanwhile, even apart from its application to “Fallen Creation” doctrine, I suggest one can understand a lot about our current culture, and how it cuts across the biblical worldview, by bearing Prometheus in mind. 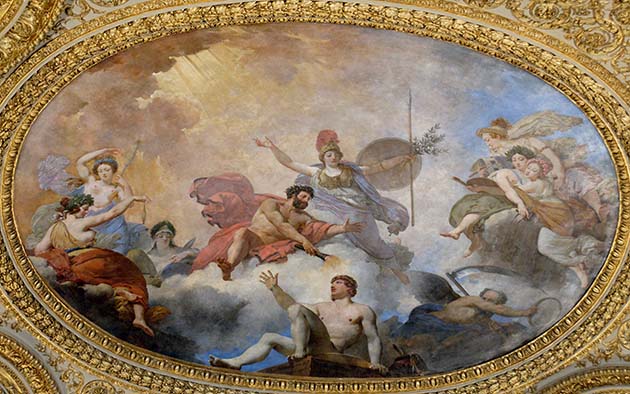 The Creation of Man by Michaelangelo (Sistine Chapel). Compare and contrast…

Training in medicine (which was my career), social psychology and theology. Interests in most things, but especially the science-faith interface. The rest of my time, though, is spent writing, playing and recording music.
View all posts by Jon Garvey →
This entry was posted in Creation, History, Philosophy, Prometheus, Theology. Bookmark the permalink.