A year or so ago I watched a UK-produced TV series about the history of archaeology. Prominent in the first episode was a quite mythological claim that early antiquarians were courageous scientists battling against the opposition of a Church monolithically defending biblical literalism and the Flood. It entirely bypassed the fact that most of these guys were churchmen, even though it named some of them, apparently oblivious to the self-contradiction. I thought I’d beefed about it here, but I can’t find anything so no doubt I bottled it up and attributed it to local ignorance … though you’d expect that a series about the “History of…” would do some homework on, well, history.

The situation is quite different with the new remake of Carl Sagan’s Cosmos, now being screened out in the US. It’s not a local production, but more a scientific Encyclical. Even the original series was a mega-budget blockbuster. It made Sagan a household name, and launched countless scientific careers, including that of physicist Prof Brian Cox, Britain’s top science programme-maker, female heart-throb and general go-to guy for Authoritative Science.The new series is even more ambitious, and is seen so much as the Word-Of-Science-To-This-Generation that, I hear, it was launched with an address from President Obama.

It is as much an ex cathedra pronouncement of scientific infallibility as any TV programme could be. Is that an exaggeration? Judge for yourself from the status of the orginal series. And so it is more than accidentally significant that the anchorman’s introduction repeated Carl Sagan’s soundbite in order to launch the series on the correct trajectory:

The Cosmos is all that is or was or ever will be.

Well then, this multi-million dollar series is a state-of-the-art programme about all that is, or was, or ever will be. So nothing will have been left to chance. Yet it has been pointed out – but as far as I know only by Luddite dissidents like the Discovery Institute, rather than by mainstream Christian scientists, philosophers, theologians or even by BioLogos – that this statement is an entirely unscientific claim for the truth of materialistic naturalism. It is a straight denial of the existence of the transcendent, and it’s made in the name of All Science. It would be good if the scientific community, perhaps in the guise of the NAS which has at least 15% of theist members, pointed out this extreme metaphysical prejudice in the interests of both truth and the sensibilities of the religious majority of Americans it’s trying to educate. But I doubt that will happen. Why is that, do you think?

More significant, because it has to do with verifiable matters, was the stress in the first programme on the persecution of scientists by “The Church”, specifically condemning the Roman Catholic, Reformed and Lutheran wings. The instance cited was the burning at the stake of Giordano Bruno for his affirmation of Copernicanism (remember Copernicus? The Catholic canon lawyer?). Now as any historian of science will tell you, that nineteenth century tale from people like J W draper and A D White is a complete travesty of history, like the myth of the persecution of archaeologists in my British TV programme. What’s more, as Ted Davis would happily confirm, the truth about Bruno has been in the literature for decades – it’s even in popular books on science history. In fact it’s so well known that our common resource, TOF, responded to what the first Cosmos episode said simply with:

Pressed in the comments, he added in his inimitable style:

Bruno is to astronomy as New Age is to quantum mechanics.

That is, he had some woo-woo Hermetic notions and he co-opted Copernicanism as something that would illuminate it. He knew nothing of astronomy. Stanley Jaki, who translated his “The Ash Wednesday Supper” made the wry comment that had the Copernicans bothered to read it, they would have burned Bruno.

TOF knows whereof he speaks. Historian James Hannam puts it more academically, demonstrating that Bruno was little more than a Hermetic magician, whose endorsement of Copernicus’ heliocentrism stemmed from no understanding of what was, in any case, an evidentially insupportable hypothesis. Bruno’s support arose purely from his neo-Platonist veneration for the sun, and from the kudos that Copernicus’ good reputation would impart to his own pantheistic and Christ-denying new religion. When he harangued Oxford audiences about how backward-looking and ignorant they were (as he did everyone who disagreed with him):

The trouble was that the Oxford masters were far from ignorant, They had been discussing Copernicus for at least the previous ten years and had come to the same conclusion as everyone else – he was wrong.

Bruno had to leave Oxford not because of Copernicanism, but because he was found to be plagiarising and misrepresenting Marsilio Ficino. Needless to say, it was his heretical religious views that had him excommunicated by the Protestant churches in various places – they had very little interest in the heliocentrism issue, certainly as a religious issue. When in 1610 he came, at last, before the Inquisition at Rome, although the exact charge sheet has been lost, there was no shortage of frankly heretical dogma in his works for which to indict him. As for his being a martyr to science for his heliocentrism:

This is impossible. As we will see in the next chapter, Copernicanism was not declared a heresy until 1616.

Even so, whatever the charges were Bruno agreed to recant, and there it would have rested if he hadn’t also written to the Pope denying that the statements on which he’d been charged (religious and magical, not scientific, remember) were heretical at all.

Now all this is well-known, and a multi-million dollar science series, without doubt, has access to real science historians. So what is going on if the flagship science series of the century starts with a political endorsement, has a metaphysical commitment as a mission statement, and commences with an “impossible” version of history that seeks to discredit the religious traditions from which a majority of its viewers come?

Imagine for a moment that the Cold War had played out slightly differently. In the communist aftermath the series Kosmos begins with a warm address by Comrade Putin praising the efforts of the scientist-workers on behalf of the revolution. The anchorman sums up the aim of the series by saying:

The Kosmos is the evolutionary outworking of the Marxist-Leninist dialectic culminating in socialism.

The first scene is about how for a century biology was undermined by the mad religiously-inspired theories of the Monk Mendel, and by the capitalist warmongers like Nobel who diverted all science towards weapons research.

Now tell me, how much of the science of the rest of the series would you accept at face value? Would you even watch any more, knowing that all that money spent on the first half hour had been to promote a ruling worldview? You would have to conclude you were watching the propaganda of a rich and powerful ideological establishment, and you’d suspect the science was being used only to serve its wider agenda.

It seems to me, Houston, that we have a big problem with our starship. 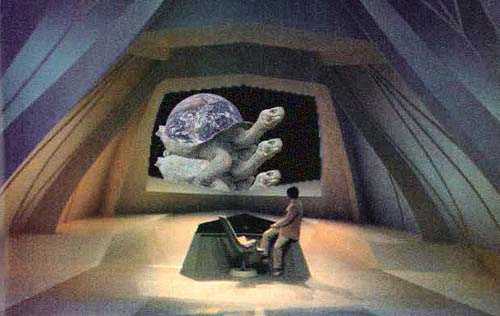 Training in medicine (which was my career), social psychology and theology. Interests in most things, but especially the science-faith interface. The rest of my time, though, is spent writing, playing and recording music.
View all posts by Jon Garvey →
This entry was posted in History, Philosophy, Politics and sociology, Science. Bookmark the permalink.