The myth behind the myth

In the last post I referenced C S Lewis’s essay on the modern Myth of “Evolutionism” (as distinct from the scientific theory of evolution, just to remind you…), of which one major, and undoubtedly correct, point is that the ideological motivation to believe in evolution as an overarching principle precedes Darwin’s biological theory by several decades. But Lewis doesn’t attempt to explain fully why it should have developed in the first place. Here’s my attempt to do so. 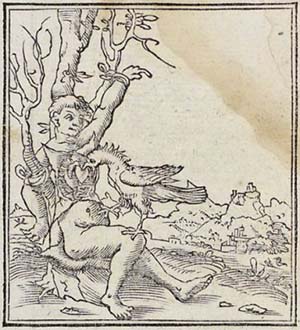 To achieve this I will return to the much older myth of Prometheus, whose ubiquitous influence on modern thinking I first realised in researching the modern Christian belief in a fallen natural order, which replaced the original Christian and biblical teaching that only mankind himself fell through sin. My (original, I think) conclusion was that this teaching arose largely as an over-reaction to the influence of the Prometheus myth on Renaissance humanism. That work remains to be published – next year, maybe – but since doing it I have seen many signs that Prometheus has been both a conscious inspiration and an unconscious archetype for modern thought (selective attention does that to you!). See here and here for prevous takes on this.

The book by science historian John Henry that I referenced from the comments of the Lewis post (largely to point to the influence of magic in early science) also speaks of the efforts of seventeenth century scientists to combat a newly emerging atheism. This alone demonstrates that science itself was not an irreligious pursuit, but as Henry points out, the discoveries of science lent themselves to being adapted to atheist agendas, and in the eighteenth century Enlightenment this became overt.

Most accounts of the rise of modern atheism seem foggy about the earlier stages, and begin their assessment in the Enlightenment, but here let me just note that the re-invention of “freedom” as “autonomy”, represented by the Prometheus myth from the fourteenth century onwards, was linked to anti-clericalism and a perhaps justified resentment at the monolithic power of Catholicism, and also to the perceived aloofness of the scholastic concept of God (although I would contend that the latter has a lot to do with the detachedness inherent in philosophical discourse, and the decline in religious life that necessitated the Reformation).

Regarding the Enlightenment, apart from the sources I’ve named in my blogs linked above, philosopher Barry Whitney writes:

Numerous influential writers exemplified this new atheism, but it was Voltaire’s Pandore (1740), perhaps, which was largely responsible for promoting the Promethean myth into public prominence. Prometheus was displayed as the benevolent creator of humanity, while Zeus/Jupiter/the Christian God were depicted as the cruel tyrant who causes the evil and suffering in the world.

Even nearly a century later, Goethe voiced similar sentiments in his work, Prometheus.

Another philosopher of religion, Joseph C. McLelland, in a book called Prometheus Rebound: The Irony of Atheism (which is priced in the “stupid” range, but visible on Google Books) actually dubsthe most common type of modern atheism “Promethean Atheism”, which seems to me to vindicate the conclusions I had come to independently on the nature of the “spirit of the age”. He writes:

…among the various types of atheism, the dominant modern form is best understood as wilful rebellion on behalf of human freedom. And further, that the figure of Prometheus functions on its behalf as a striking archetype of autonomy… The Platonic ideal of autarkeia is on view, that self reliance that stems from the courage to move beyond mere opinion to rational knowledge. If for Plato this involved The Good or God, modern rationalism makes do with autonomous human reason…

Thus the figure of Prometheus is paradigmatic – it embodies the autonomy of will that is the true archetypal power behind the symbols of rebellion and freedom… Zeus or Prometheus, but not both: that is the root of the issue.

Astute readers may recognise in this the motivation behind Richard Lewontin’s oft-quoted words about biology not letting God get a foot in the door, or Thomas Nagel’s that he doesn’t want the Universe to be the kind of place that has God behind it. It appears to be a matter of the will first, and only secondarily a matter of the intellect.

Barry Whitney (again), writing, as it happens, in favour of process theology against both atheism and classical theism, nevertheless echoes the idea C S Lewis voices in his essay, that the removal of God, ostensibly in the name of reason, actually weakens the scope and authority of reason – but that is outweighed by the ideological choice the Promethean Myth offers between God and human autonomy:

Napoleon’s scientist during his Egyptian campaign, the Marquis Pierre de La Place (18th century), to note one further prominent example, all-but-deified human intellect and rationality while rejecting traditional religious beliefs as failing to meet the criteria of scientific and philosophical rationality — a view currently held by philosophical and scientific logical positivists and empiricists who limit knowledge to that which is gained by the scientific method. Such (arbitrary) limitations on what constitutes knowledge have dominated modern thinking, but have not gone unchallenged. Postmodern philosophy of science, represented by Thomas Kuhn, Paul Feyerabend, and many others challenged the empiricist assumptions.

And so, I suggest, the Promethean myth that was first used to re-interpret the Genesis Fall narrative in favour of human independence in the early Renaissance has remained, even when not consciously acknowledged, the paradigm by which Western society has evolved ever since, certainly as far as modernism goes and, in a debased form, even in postmodernism. For in the latter, the almost solipsistic individualism inherent in Descartes metaphysics, which Henry identifies as one factor in his “Promethean Atheism”, is expressed in a radical form, in which all objective knowledge is oppressive of individual freedom – we truly do create our own worlds.

If the argument above is true, then how does it relate to Lewis’s “Evolutionism Myth”? There are several answers, some as subtle as the “nobility” of mankind’s eventual defeat in Lewis’s account: note how in the story of Prometheus, though morally superior to Zeus, he still ends up chained and tortured by the latter’s malevolent brute power. It seems that heroic failure is inherent to the power of the narrative: if a vindictive God is removed from the picture, vindictive nature has to substitute for him. It’s not so much about winning, as deserving to win against the odds.

But at the most obvious and basic level evolutionism is essential to the Prometheus Myth because it is simply the only way to do without God altogether. If God does not form things, they must form themselves. The atomist theory, that began to prevail in early-mdern science, as first formulated by Greek philosophers, had often included ideas of the eternal existence of the universe, and hence the arrival of all possible things by chance collisions of atoms, eventually. But evolutionary ideas were also present in Greek thought too, and were opposed to the philosophies of those like Plato and Aristotle, who embraced teleology and therefore some concept of divinity. The Internet Encyclopaedia of Philosophy explains:

Anaximander is often regarded as a precursor of the modem theory of development. He deduces living beings, in a gradual development, from moisture under the influence of warmth, and suggests the view that men originated from animals of another sort, since if they had come into existence as human beings, needing fostering care for a long time, they would not have been able to maintain their existence. In Empedocles, as in Epicurus and Lucretius, who follow in his footsteps, there are rudimentary suggestions of the Darwinian theory in its broader sense; and here too, as with Darwin, the mechanical principle comes in; the process is adapted to a certain end by a sort of natural selection, without regarding nature as deliberately forming its results for these ends.

So one can see the Evolutionism Myth as an explanatory codicil to the Promethean Myth: it makes mankind the culmination of nature’s achievements, but also hints that, by his reason, man will now be able to take command of his own evolutionary destiny. How the demise of the Myth of Progress plays out in relation to the Myth of Autonomy I don’t know for sure, but I suspect that Prometheus is a more enduring figure than either Epicurus or Herbert Spencer: he has already prevailed in the West for 700 years.

Ideologically the question of the supposed justification for the myth – the tyranny of God – is a matter of individual judgement. It could be the result of a true perception (not gleaned by the power of reason, I suppose, but by whatever imaginative human faculty governs the myths we live by). It could be a misunderstanding engendered by misconceptions of God (the case that Barry Whitney presents). Or it could be that, in the end, the human rejection of the Lordship of God is to be accounted for as the story in Genesis 2-3 relates it: the result of our believing a lie through our own pride and self-deception.

Training in medicine (which was my career), social psychology and theology. Interests in most things, but especially the science-faith interface. The rest of my time, though, is spent writing, playing and recording music.
View all posts by Jon Garvey →
This entry was posted in Philosophy, Politics and sociology, Prometheus, Science, Theology. Bookmark the permalink.

2 Responses to The myth behind the myth